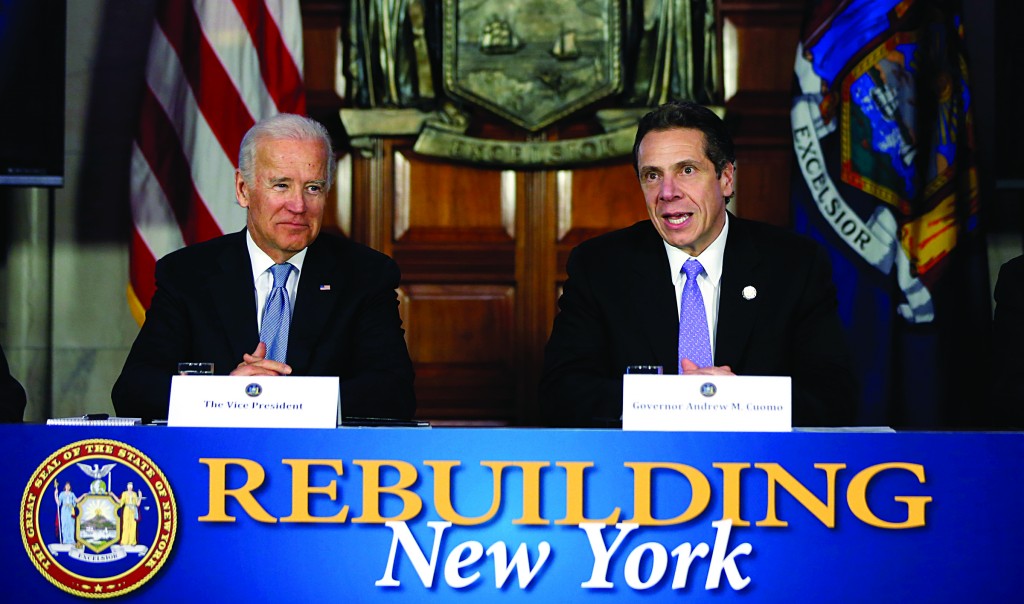 Vice President Joe Biden and Gov. Andrew Cuomo said Tuesday that New York and the nation’s other coastal states have to rebuild against severe storms and flooding, which the two claimed are likely to recur in the future.

“Extreme weather is the new reality,” Cuomo said, before describing an estimated $16 billion in projects he proposes launching this year. “And we have to deal with it.”

Biden, who also cited rising sea levels, said coastal areas have to rebuild smarter if people are to continue living there. Superstorm Sandy in 2012 caused $32 billion in damage to New York, which so far received half of an initial $12 billion in federal supplemental funding for storm relief and reconstruction, he said.

“We have to rebuild in a way you will not be victimized by a similar storm again,” said Biden, who comes from Delaware. “Manhattan is like my state. It’s essentially at sea level.”

The Oct. 29, 2012, storm was one of the most expensive storms in history and one of the worst to strike the Northeast. Most of its fury was aimed at New York, Connecticut and New Jersey. It is blamed for more than 150 deaths and $50 billion in damage.

The governor, also citing damage from the storms Irene and Lee in 2011, proposed specific prevention and rebuilding measures. He called for expanding the total weather forecasting stations statewide from 27 to 125; redesigning New York City’s subway system, which flooded during Sandy, with plugs for all its 540 openings; and redesigning 100 upstate bridges to make them more resilient.

“Ninety percent of New Yorkers live within five miles of the shoreline,” Cuomo said. “The ocean’s still moving in and reclaiming the shoreline.”