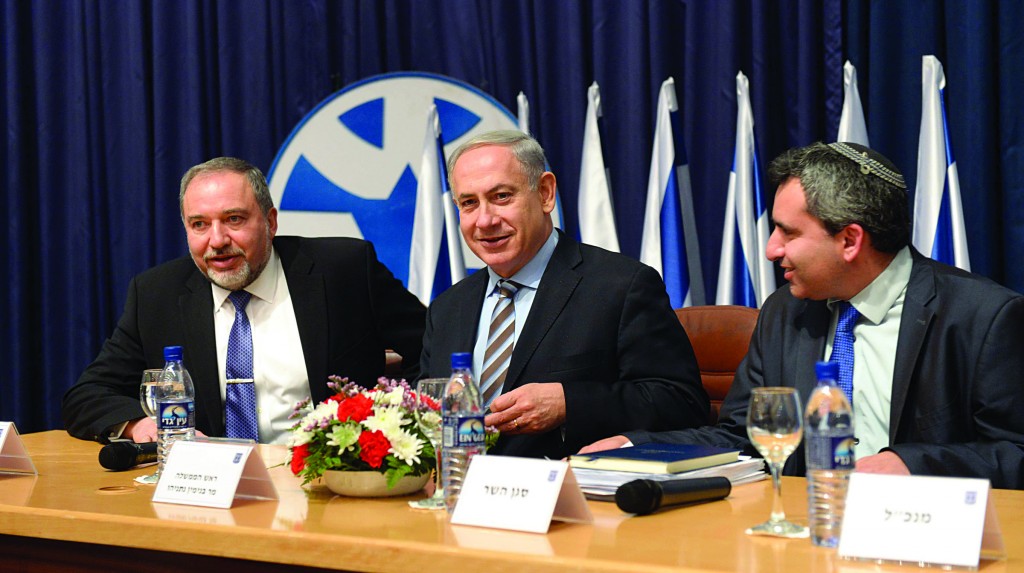 Prime Minister Binyamin Netanyahu hinted on Monday that he might be willing to give up uninhabited land in Yehudah and Shomron to keep the main bloc of Jewish communities in a peace agreement with the Palestinians, according to The Jerusalem Post.

Although Secretary of State John Kerry appeared to have left the region empty-handed at the end of his 5-day visit on Monday, Netanyahu’s comment, made at a closed Likud faction meeting, may have been a sign of the “progress” that the secretary had alluded to on Sunday.

A senior Jordanian official was quoted by Ynet as confirming that Netanyahu was showing flexibility on territorial issues, saying that otherwise there would not be any subsequent talks.

But according to the Jordanian, Netanyahu was willing to cede up to 30 square miles of land inhabited by 300,000 Arabs in the Wadi Ara area, a piece of land northwest of the Green Line located in the southern part of the Haifa District. The territory would form the northern border of a future Palestinian state.

He also claimed that Palestinian Authority President Mahmoud Abbas agreed to an interim combined security force in the Jordan Valley, made up of Israeli and U.S. soldiers with PA observers, for three years.

Netanyahu claimed at the Likud meeting that he succeeded in persuading Kerry of the importance to Israel of the Yehudah and Shomron blocs, as well as areas of strategic and historical significance.

“There is an understanding about Israel’s need to keep [the] blocs and areas of historical significance like Chevron and Beit El,” sources close to Netanyahu quoted him as saying following the meeting.

London-based Arabic-language newspaper Al-Quds Al-Arabi reported that Kerry told King Abdullah of Jordan that he would not agree to Netanyahu’s request to extend the negotiations without an announcement of forward movement.

A diplomatic source also said that Jordan told Kerry that Jordan’s security must be taken into account in a final agreement. The current framework makes no mention of Jordan, neither in terms of borders, the return of Palestinian refugees, or the ultimate disposition of Yerushalayim.

According to right-wing Likud MKs who attended the meeting, Netanyahu opposed  annexation of the Jordan Valley, explaining that doing so would mean giving Israeli citizenship to the Palestinians in the annexed areas.

“I know some of you support that [annexing the Jordan Valley], but I don’t want to control 1.5-2 million Palestinians, and neither do most Israelis,” he was quoted as saying.

While the prime minister did not deny that the issue of land swaps had arisen in the negotiations, he stressed he did not think there was any point in talking about it at this stage in the process.

Opposition leader Isaac Herzog (Labor) met with Kerry on Monday morning and afterwards said, “We’ve reached a historical moment in decision-making. I feel that we have no alternative other than separation from the Palestinians and the establishment of two states.”

“Both of the leaders will need to decide if they are able to lead a courageous and historic deal.”

Meanwhile, a senior Palestinian Authority official’s comments to the Syrian media offered a rather different view of progress in the peace talks:

Any agreement will only be the “first stage” in eradicating Israel altogether, Fatah central committee member Abbas Zaki said in a news clip translated and circulated by Palestinian Media Watch (PMW).

“You can relax,” he told the Syrian interviewer. “We find ourselves united for the first time. Even the most extreme among us, Hamas, or the fighting forces, want a state within the ’67 borders [sic]. Afterward, we [will] have something to say, because the inspiring idea cannot be achieved all at once. [Rather] in stages,” he responded.