Five Things to Know About the Record-Breaking Freeze

Much of the country grappled Monday with a historic freeze that shuttered schools and businesses at the start of the first full work week of 2014. Flights, trains and bus transportation were disrupted, thousands were left without power and even parts of the country used to fending off hypothermia and frostbite had to take extra precautions as temperatures and wind chills approached record levels.

Here are five things to know about the deep freeze.

1. Cold Outside? You’re Not Alone

Nearly 187 million people, more than half of the nation’s population, were under a wind chill warning or advisory Monday.

The winds made it feel like 55 below zero in International Falls, Minn., and parts of the Midwest accustomed to temperatures that are cold — albeit seldom this cold.

But even in the coal fields of Virginia and West Virginia, the wind chill was negative 35.

Every major weather-reporting station in Minnesota, North Dakota and Wisconsin reported temperatures below zero at 11 a.m. Monday, and South Dakota would have joined them if not for the reading of 1 at Rapid City.

The coldest temperature reported in a 24-hour period through Monday was -36 degrees at Crane Lake, Minn. The warmest: 84 at Hollywood and Punta Gorda, Fla. 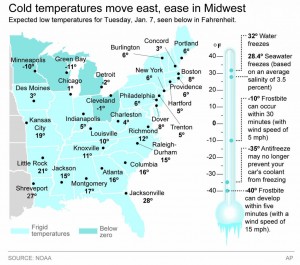 2. Fly Away From the Weather? Think Again

Nearly 3,200 flights — one out of every 10 domestic departures — were canceled Monday morning, following a weekend of travel disruption across the country. The bulk of those cancellations were in Chicago, Cleveland, New York and Boston.

“It’s been one weather system after another,” said Delta Air Lines spokesman Morgan Durrant. “It’s been a challenging 72 hours.”

With wind chills as low as 45 below zero at some airports, workers could only remain exposed on the ramp for a few minutes. That made loading and unloading luggage a challenge.

American Airlines said temperatures are so cold at Chicago’s O’Hare International Airport that fuel and de-icing liquids were actually frozen. United Airlines said its fuel is pumping slower than normal in Chicago.

Passengers reported long lines at airports as they tried to rebook on other flights. United Airlines had so many phone calls that it was suggesting travelers use its website to rebook.

In recent years, airlines have cut the number of flights to ensure that most of their planes depart full. That’s been great for their bottom line but leaves very few empty seats to rebook stranded travelers. Sometimes, it takes days to get everybody where they should be.

Planes weren’t the only form of mass transportation disrupted by the historic freeze. There also were widespread delays and cancellations in ground transportation — including Amtrak, buses and commuter trains.

Officials with Chicago’s commuter rail, Metra, said there were multiple accidents, including one in which 14 passengers reported injuries — and six were taken to the hospital with minor injuries — after a train hit a “bumping post” at a downtown station. Spokesman Michael Gillis said the cause of the collision was under investigation but was due to the weather.

Weather-related engine problems forced an Amtrak train carrying 200 passengers to stop for more than 8 1/2 hours in southwestern Michigan before arriving early Monday morning in Chicago. A spokesman said heat, lights and toilets continued to operate while crews tried to solve the problem. Spokesman Marc Magliari said it eventually was connected to another westbound train and arrived in Chicago around 1:30 a.m. CST.

And the men’s basketball team spent the night on a church floor in central Illinois after their bus got stuck in a snowdrift on Interstate 57. A tow truck pulled the bus from the side the road around midnight — hours after they first ended up on the side of the road.

4. Storm Leaves Thousands in the Dark

Widespread power outages were being blamed on the storm, including in Indiana, where crews worked to restore services for more than 40,000 customers. Utility officials cautioned some people could be in the cold and dark until Thursday.

State officials said sites without power included the residential portion of the governor’s residence in Indianapolis.

Gov. Mike Pence noted during a news conference Monday that the house has “lots of fireplaces” but urged others without power to go to a shelter if necessary.

The city of Indianapolis evacuated more than 400 residents without heat or power, said Marc Lotter, a spokesman for Mayor Greg Ballard. Many found temporary comfort at warming centers set up around the city, while those needing long-term shelter were sent to the American Red Cross.

“It’s pretty typical of what we see when it’s this cold,” said Dr. Paul Casey, an ER doctor at Rush University Medical Center in Chicago. “Later in the day, the more people are outside working, we may see more cold-related injuries such as frostbite and hypothermia.” 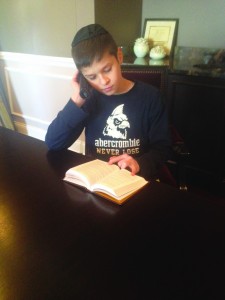 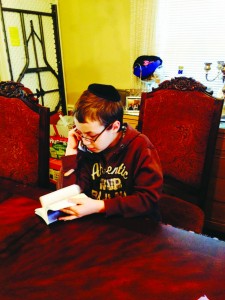 This article appeared in print on page 3 of the January 7th, 2014 edition of Hamodia.