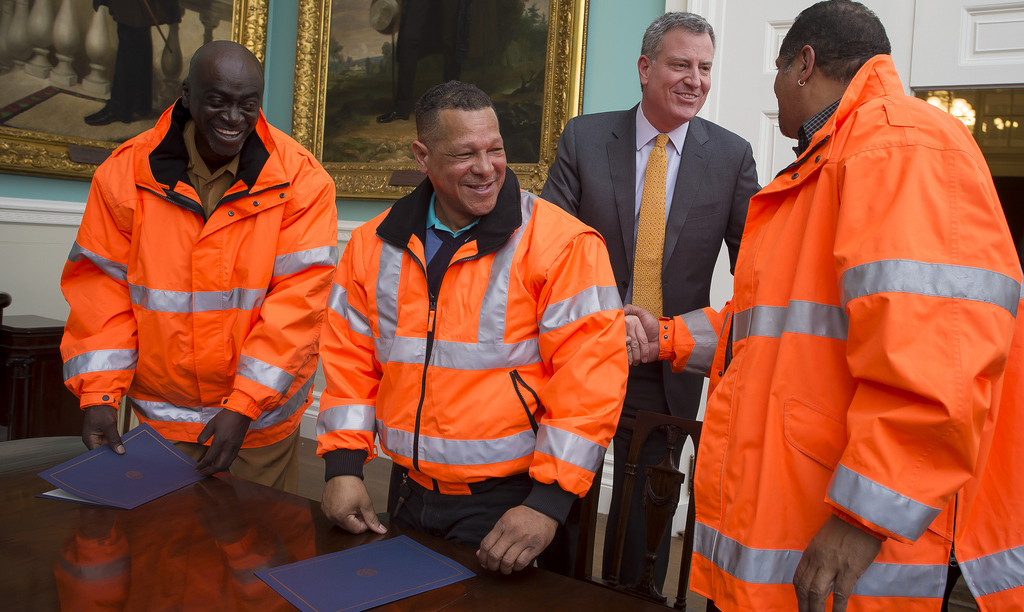 Mayor Bill de Blasio surrounded himself with labor leaders Monday morning, the latest choreographed show of support for his signature campaign promise to fund universal pre-kindergarten programs with a tax increase on the wealthy.

But at that exact moment, the person whose backing he most needs assembled his own news conference about 150 miles to the north and positioned himself behind a banner that read “Cutting Taxes for New Yorkers.”

Gov. Andrew Cuomo’s reluctance to raise taxes pits the state’s two leading Democrats against each other and endangers the central plank of de Blasio’s liberal agenda. Though de Blasio’s proposed tax would only impact New York City residents, it won’t become law without the blessing of the state Legislature and Cuomo.

The governor, who is up for re-election and may be eyeing a White House run, again gave no indication that he is willing to support de Blasio’s tax increase. He has long signaled his support for universal pre-K but has not committed to a way to fund it. He called it a “two-step process.”

“First, decide what you want to do,” Cuomo said. “And step two is decide how you are going to do it. I think we’re on step one, which is I’m in agreement with the mayor that pre-K is the direction that this state has to head.

“The question comes: How do we pay for it?” asked Cuomo.

De Blasio wants the tax increase included in this year’s spring budget so the program can be unveiled this September.

“The governor has made a very clear commitment to pre-K and I commend him for it,” said de Blasio, who wants to raise the income tax on New Yorkers who make more than $500,000 a year from 3.876 percent to 4.41 percent. “That is different from reaching every child in New York City here and now.”

Cuomo denied a media report that he was going to introduce his own universal pre-K program in his State of the State speech Wednesday, though he could propose another way to pay for it.

De Blasio has steadfastly refused to consider an alternative means of funding.

“This is dedicated funding for five years,” he said. “We don’t want to do this year-by-year. We don’t want half-measures. We don’t want partial funding. And we believe this is a fair and just way to do it. And if there’s other resources available in Albany, I assure you we have plenty of other needs for them, in our schools and beyond.”