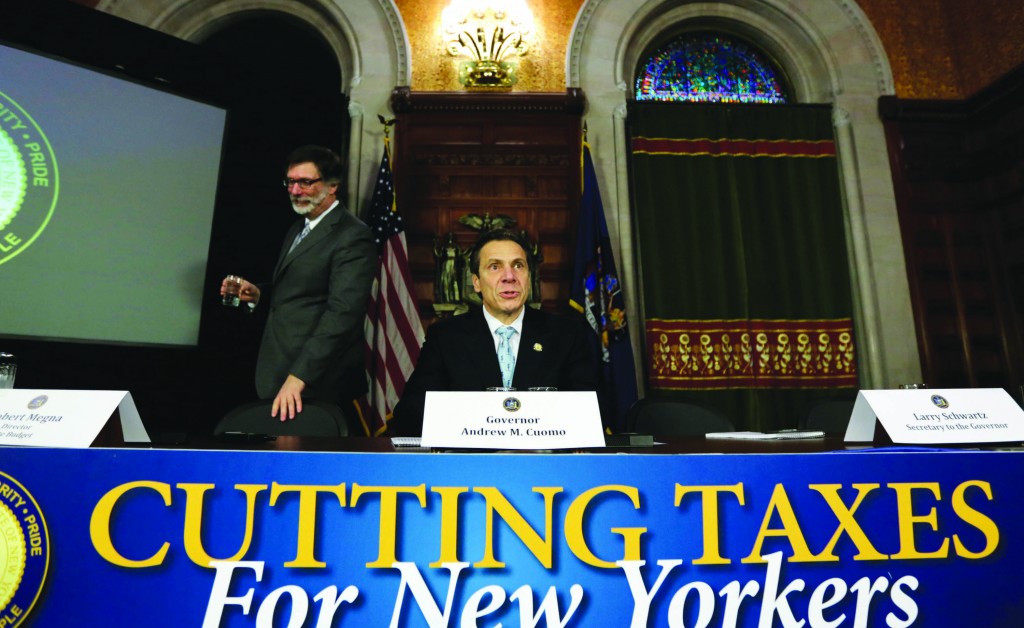 Gov. Andrew Cuomo proposed Monday cutting the state’s corporate income tax from 7.1 percent to 6.5 percent in the coming year and eliminating it altogether for upstate manufacturers.

“Business is the movement that pulls the train,” Cuomo said.

Surrounded by chamber of commerce officials in the Capitol’s ceremonial Red Room, he said he wants to make the state’s business climate more welcoming, contrary to its longtime reputation as high-tax and anti-business. “You can’t beat zero,” he said, hoping to bring factories back to the upstate area that many manufacturers left.

“The property taxes in this state are just intolerable,” Cuomo said. His proposal could freeze them for two years.

He proposed paying more state aid to any of New York’s 10,500 local governments that enforce 2 percent limits on spending increases. In the second year, he proposes using the same financial incentive for municipalities that continue applying that cap and start cutting costs by consolidating services with other towns, villages, cities and counties.

New York has some of the highest property taxes in the nation, with Westchester first, Nassau second and Rockland fourth, the governor said. Measured as a percentage of property values, he said 13 of the 15 highest-tax counties in the nation are in upstate New York.

“You just have to reduce that bureaucracy. You can’t feed that many mouths every morning,” Cuomo said.

The Empire Center for Public Policy noted that statewide there are 3,200 counties, cities, towns, villages and school districts. The remaining 6,000 government entities are mostly sewer and water districts that collect fees for direct services.

The Cuomo administration also proposed reducing the estate tax in New York, among 15 states that have one, by raising the exemption threshold from $1 million to the federal level of $5.25 million and reducing the state tax rate from 16 percent to 10 percent over four years.