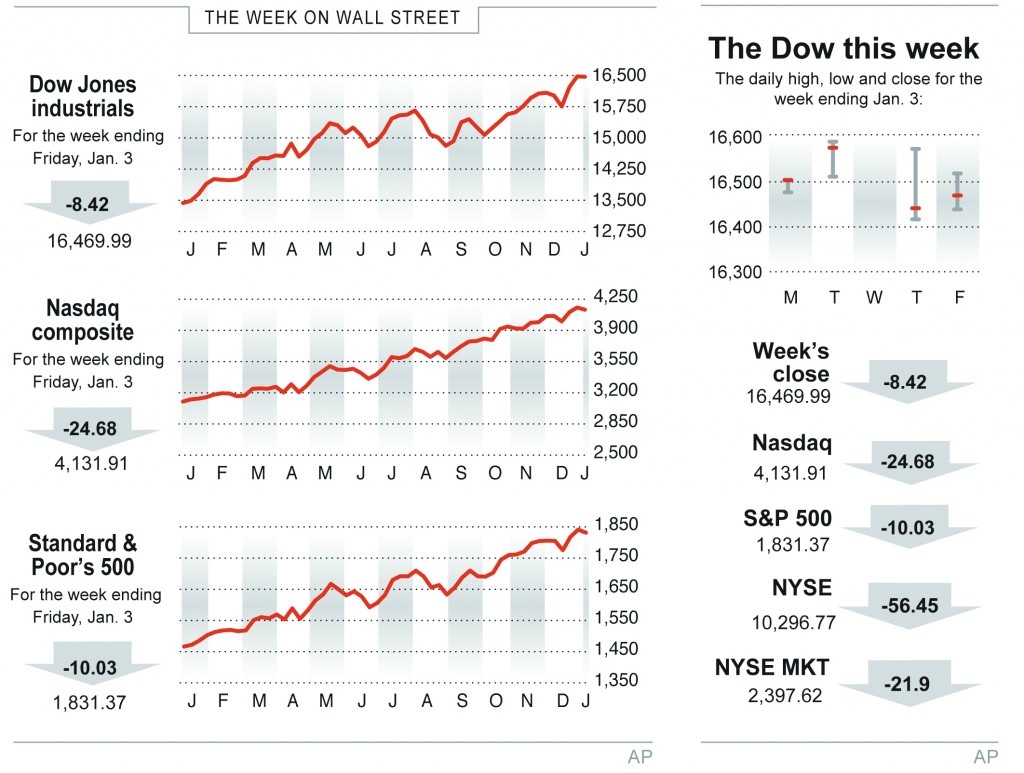 The Standard & Poor’s 500 index edged a fraction of a point lower on Friday, beginning a year with a two-day losing streak for the first time since 2005.

While few analysts expect 2014 to produce gains comparable to last year’s advance of nearly 30 percent, many see a moderate increase as the economy continues to improve and investors move funds out of bonds and into stocks, which are generating much bigger returns for investors.

“The market is trying to find some direction here,” said Scott Wren, a senior equity strategist at Wells Fargo Advisors. “We’re in for a few days of trying to figure out whether we inch a little higher or see some down days.”

Energy companies have also started the year with declines as the price of oil falls.

On Friday, oil extended a weeklong skid by falling $1.48, or 1.6 percent, to $93.96 a barrel. A strengthening U.S. economy drove the dollar higher, which hurts oil, and signs emerged of ample supply worldwide.

Federal Reserve Chairman Ben Bernanke on Friday predicted stronger growth in 2014 and said that factors that have kept the economy from accelerating appear to be abating.

“The combination of financial healing, greater balance in the housing market, less fiscal restraint, and, of course, continued monetary accommodation bodes well for U.S. economic growth in coming quarters,” Bernanke said in comments to the annual meeting of the American Economic Association in Philadelphia.

The encouraging economic backdrop is one reason for investors to remain positive about stocks, despite the slow start to the year, said Bill Barker, a senior portfolio analyst at Motley Fool Funds, which manages about $600 million in stock mutual funds.

“As long as there is no inflation and a good economy, with low interest rates … that’s the kind of thing that stocks love,” Barker said.

Among the stock market winners on Friday was Delta Air Lines.

The carrier’s stock jumped $1.53, or 5.5 percent, to $29.23 after a measure of its revenue for December rose 10 percent. Delta benefited from strong demand and the late Thanksgiving legal holiday. Analysts at S&P Capital IQ raised their earnings estimates for the carrier and boosted their recommendation on the stock to “strong buy.”

Trading was muted Friday after a winter storm hit the U.S. Northeast. The governors of New York and New Jersey declared states of emergency and urged people to avoid travelling. Trading was quiet this week, before and after January 1,  on Wednesday.

In government bond trading, the yield on the 10-year Treasury note was unchanged from Thursday at 2.99 percent.

The yield on the note climbed from 1.76 percent last year to as high as 3 percent as investors sold bonds in an improving economy. Many analysts expect the yield to continue rising this year as the Federal Reserve reduces, or “tapers,” its stimulus.

“Depending on how quickly the Fed decides to taper, this could be a very bearish year for bonds,” said Anna Rathbun, director of research at CBIZ, an investment and retirement consultant.