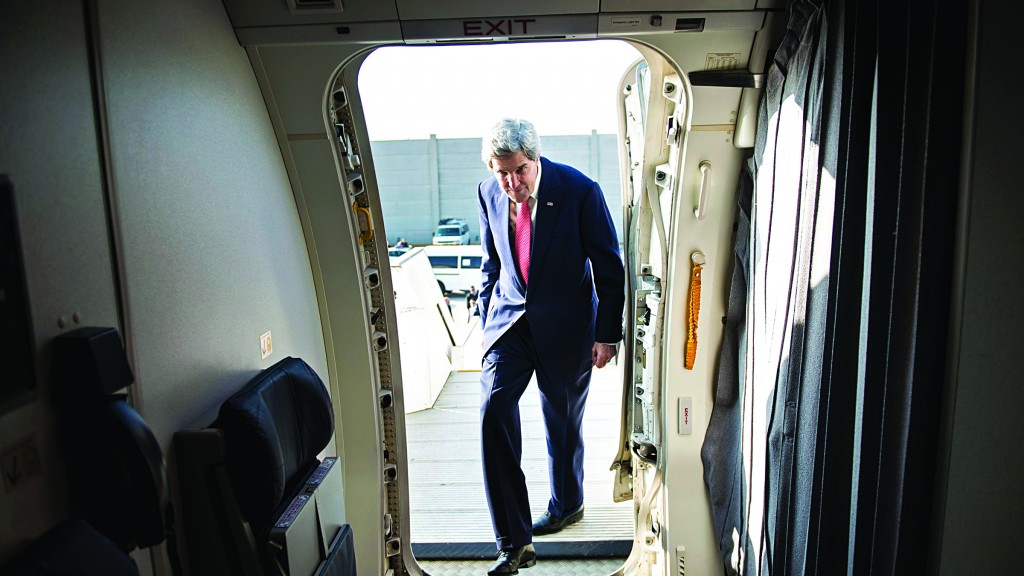 U.S. Secretary of State John Kerry said on Sunday that the Israelis and Palestinians were making some progress in peace talks, though there was still a chance no accord would be reached.

Speaking before he flew to Jordan and Saudi Arabia to brief them about his 10th set of meetings with Netanyahu and Palestinian Authority President Mahmoud Abbas, Kerry said both sides had a sharper idea of the compromises needed to secure an agreement.

“This has been a productive couple of days,” Kerry told reporters. “We have had very positive — but I have to say very serious, very intensive — conversations.”

Kerry said all major issues in the conflict — borders, security, the fate of Palestinian refugees and the status of Yerushalayim — were under discussion.

“The path is becoming clearer. The puzzle is becoming more defined. And it is becoming much more apparent to everybody what the remaining tough choices are,” he said, adding he would not be flying to meet the kings of Jordan and Saudi Arabia if he did not believe both sides were grappling with the issues.

“But I cannot tell you when, particularly, the last pieces may decide to fall into place or may fall on the floor and leave the puzzle unfinished,” added Kerry, who was due to return to Israel later on Sunday.

Seeking to head off any more progress along the lines Kerry envisions, the Jewish Home party threatened to pull out of the coalition if Israeli Prime Minister Binyamin Netanyahu accepts the 1967 lines as the framework for a final status agreement.

“A government that accepts the 1967 lines is committing national suicide. We will not be part of it and will try to replace it,” said Ayelet Shaked, the party’s faction chairwoman.

By contrast, Israel’s Foreign Minister Avigdor Lieberman, who in the past has dismissed any prospect of peace with the Palestinians as unrealistic, has been suprisingly supportive of Kerry in recent days.

“Any alternative proposal we’ll get from the international community will be much less comfortable for us,” he told a meeting of Israeli ambassadors in the capital. Lieberman expressed appreciation to Kerry for his clarity about the need for Israel to be recognized as a Jewish state and to have its security needs met.

A diplomatic source confirmed Kerry had asked Abbas directly during this visit to recognize Israel as the Jewish homeland.

However, Lieberman was far from abandoning his long-standing position that that any peace accord must include an “exchange of populations and territory” with a future Palestinian state.

“We are not talking about a transfer, as was done to the Jewish communities in Gush Katif,” he explained. “Nobody will be expelled from their homes or dispossessed of his possessions.” Instead, he said, what he has in mind  is “simply moving the border.”

He said that there was no reason the Israeli Arabs living there “should not join their brethren and become citizens of  the future Palestinian state that they want so badly.”

As usual, the view from the Palestinian side has been less than optimistic. Yasser Abed Rabbo, a senior Palestinian official, called ssthe ongoing talks “serious,” but told Voice of Palestine radio: “I can’t say now that there’s any actual or substantial progress in all the discussions.”

Meanwhile, Senator John McCain said after meeting with President Shimon Peres in Yerushalayim that “we have room for guarded optimism, and we’re appreciative of the efforts of Secretary of State John Kerry.”

After speaking with both sides and with Kerry himself, McCain said that he saw “a willingness that has not been there in abundance in the past.”

McCain is leading a delegation of Republican members of Congress on a tour of the region.