After Year of Stock Records, a Weak Start to 2014 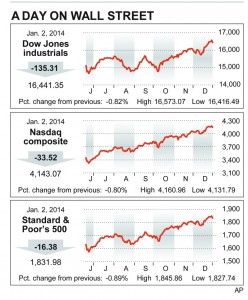 Investors may already feel a little nostalgic for 2013.

The Standard & Poor’s 500 index began the New Year with its worst performance in three weeks as energy and technology companies pulled down the stock market.

Stocks started the year at lofty heights after a combination of rising company earnings and economic stimulus from the Federal Reserve pushed major indexes to record levels in 2013. The S&P 500 surged almost 30 percent, its best year since 1997, and the Dow Jones industrial average climbed 26.5 percent, the most since 1995.

“The market was grossly overbought and needed to pull back,” said Peter Cardillo, chief market economist at Rockwell Global Capital. “But fundamentally everything is looking pretty good.”

Energy stocks fell as the price of oil dropped $2.98, or 3 percent, to $95.44 a barrel. Oil slumped after reports that an end to protests at a major Libyan oil field could return 300,000 barrels of daily production to the global market.

Technology stocks lost ground after analysts published gloomy notes on companies in the sector. Analog Devices lost $1.65, or 3.2 percent, to $49.28 after analysts at Goldman Sachs advised its clients to sell the chipmaker’s stock, saying it’s overvalued compared to its peers.

Apple fell $7.89, or 1.4 percent, to $553.13, after Wells Fargo cut its outlook on the stock to “market perform” from “outperform,” saying profit margins may come under pressure later this year.

Some analysts said investors shouldn’t read too much into the lackluster start to the year because trading volumes were below normal as the holiday season wound down with many market participants still away from their desks. 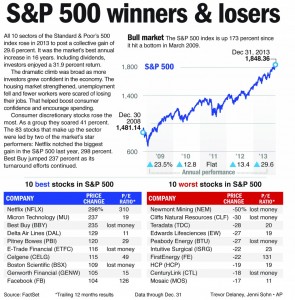 Investors will be hoping that the stock market steadies because its performance in January often gives an indication of how the rest of the year might turn out. The January barometer has proven accurate almost 90 percent of years since 1950, according to the Stock Trader’s Almanac.

The yield on the 10-year Treasury note climbed to 2.99 percent from 2.97 percent after some encouraging reports on the economy. The yield on the note, which rises when investors sell bonds, is close to its highest since July 2011.

The number of Americans seeking unemployment benefits last week fell by 2,000, extending a recovery in the job market, and U.S. manufacturing grew at a healthy pace in December as factories stepped up hiring and received more orders.

Among other stocks making big moves, Martha Stewart Living Omnimedia climbed 37 cents, or 8.8 percent, to $4.56 after it announced an end to its bitter standoff with Macy’s over a breach-of-contract lawsuit involving J.C. Penney.

This article appeared in print on page 8 of the January 3rd, 2014 edition of Hamodia.