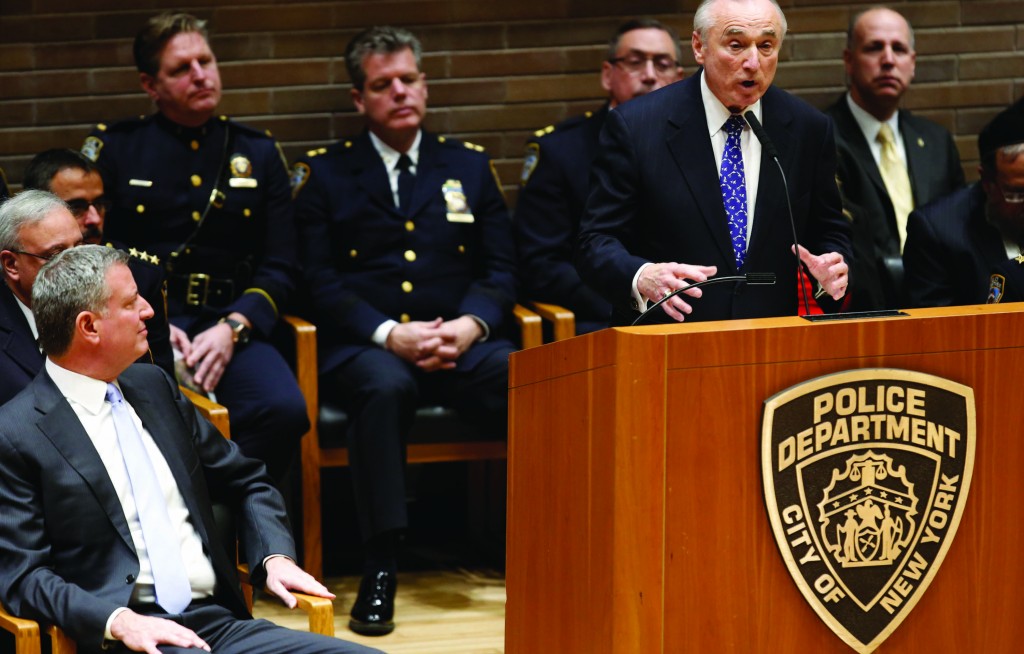 William Bratton took over the nation’s largest police force Thursday for the second time, pledging to keep the city safe while also reforming community relations, which he said have been strained by the police tactic known as stop and frisk.

“My commitment and the commitment of the NYPD that I am privileged to lead will be to work with you to ensure that at all times policing in this city is done constitutionally, respectfully and compassionately,” he said.

He takes the helm of the 34,000-officer department as it tries to maintain a historic drop in crime and an extensive counterterrorism program, even as its tactics have come under increased scrutiny. Bratton, who has also led the Boston and Los Angeles police departments, succeeded Raymond Kelly, the NYPD’s longest-serving commissioner.

De Blasio said New York remained a top terror target and said his administration would “spare no effort” to protect New Yorkers. But it would not be done at the expense of the rights of the community, he said.

De Blasio praised Bratton’s experience and his willingness to evolve and hear out new ideas. He called Bratton a “progressive crime-fighter.”

At a news conference after the ceremony, Bratton pledged transparency and signaled he would keep and expand some crime-fighting and counterterror programs but wasn’t afraid to make changes.

He will take over a department with new, unprecedented oversight, after the addition of an inspector general and a possible court monitor to oversee stop-question-and-frisk reforms. The monitor is on hold pending an appeal of a federal judge’s ruling. De Blasio has said he will drop the appeal, but the police unions may press forward.

Bratton, known for his outsized personality, was police commissioner under Rudy Giuliani from 1994 to 1996. Bratton emphasized the broken-windows theory of police work — that criminals who commit small crimes, such as vandalism, also commit more serious crimes.

He also helped spearhead the use of CompStat, a data-driven system of tracking crimes that allows police to better allocate resources to high-crime areas. Crime immediately plummeted, but Bratton fought with Giuliani over who deserved credit. He resigned after two years.

Bratton is a U.S. veteran and longtime lawman. He led the Boston Police Department and the formerly independent New York City Transit Police before running the NYPD, and spent seven years atop the LAPD. He is credited with cleaning up the image of the scandal-plagued LAPD, and crime dropped every year he was in office.