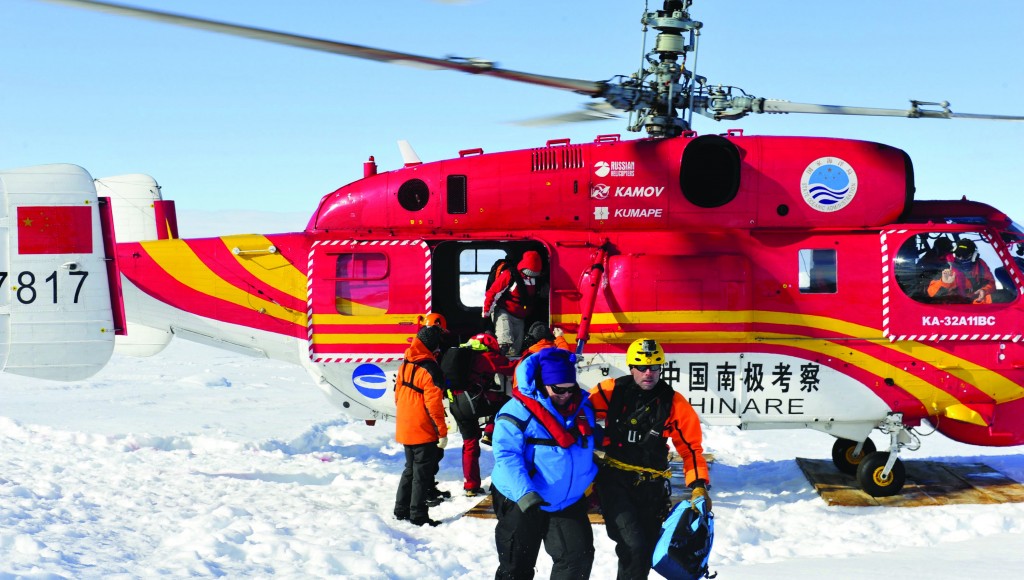 All 52 passengers trapped for more than a week on an icebound Russian research ship in the Antarctic were rescued Thursday when a Chinese helicopter swooped in and plucked them from the ice a dozen at a time.

The twin-rotor helicopter — its red and yellow colors contrasting starkly against the ice and snow — carried the scientists and tourists from the Russian ship MV Akademik Shokalskiy to an Australian icebreaker, according to the Australian Maritime Safety Authority’s Rescue Coordination Centre, which oversaw the rescue.

At one point, the passengers linked arms and stomped out a landing site in the snow next to the Russian ship for the helicopter, which is based on a Chinese icebreaker.

The eagerly anticipated rescue came after days of failed attempts to reach the vessel, which was trapped since Dec 24.

The icebreaker Aurora Australis will take the passengers to the Australian island state of Tasmania, a journey expected to last two weeks.

“I think everyone is relieved and excited to be going on to the Australian icebreaker and then home,” expedition leader Chris Turney told The Associated Press by satellite phone from the Antarctic.

The 22 crew members of the Akademik Shokalskiy stayed with the icebound vessel, which is not in danger of sinking and has enough supplies on board to last for weeks. They will wait until the ice that surrounds the ship breaks up.

The Akademik Shokalskiy, which left New Zealand on Nov. 28, got stuck after a blizzard pushed the sea ice around the ship, freezing it in place about 2,700 kilometers (1,700 miles) south of Hobart, Tasmania.

Three icebreakers were dispatched to try to crack their way through the ice surrounding the Russian ship, but all failed. The Aurora came within 20 kilometers (12 miles) of the ship Monday, but fierce winds and snow forced it to retreat to open water.

On Thursday, it initially appeared the weather had thwarted yet another rescue attempt. The helicopter was originally going to carry the passengers back to the Chinese icebreaker, the Snow Dragon, with a barge then ferrying them to the Aurora. But sea ice prevented the barge from reaching the Chinese vessel, and the maritime authority said the operation would have to be delayed.

A last-minute change in plans allowed the rescue to go ahead. The passengers were instead flown to an ice floe next to the Aurora and then taken by a small boat to the Australian ship, Turney said.

The scientific team on board the Russian vessel had been recreating Australian explorer Douglas Mawson’s 1911 to 1913 voyage to Antarctica.

Turney had hoped to continue the trip if an icebreaker managed to free the ship. Despite his disappointment over the expedition being cut short, he said his spirits remained high.

“I’m a bit sad it’s ended this way,” he said. “But we got lots and lots of great science done.”

China has an interest in Antarctica, with the growing scientific power recently beginning construction on its fourth Antarctic research base.