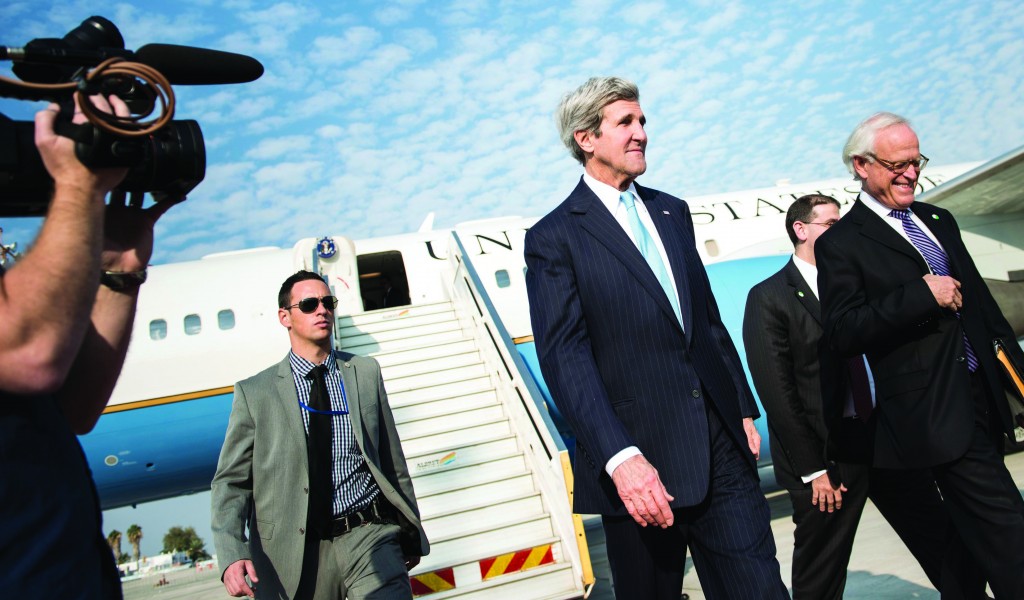 As Secretary of State John Kerry arrived in Yerushalayim on Thursday to push the Israelis and Palestinians toward an agreement for the tenth time in less than a year, a dozen Israeli officials poured cement in a Jordan Valley construction site — and poured scorn on the Kerry initiatives.

But Kerry did not have to go to the Jordan Valley to hear discouraging words. Israeli Prime Minister Binyamin Netanyahu supplied them unrestrainedly at a joint press conference shortly before their meeting.

“There is growing doubt in Israel that the Palestinians are committed to peace,” Netanyahu said, while Kerry stood at his side, and explained the reason for such doubt, as he decried the heroes’ welcome given by the Palestinian Authority to terrorists released earlier in the week.

“To glorify the murders of innocent women and men as heroes is an outrage. How can President Abbas say that he stands against terrorism when he embraces the perpetrators of terrorism and glorifies them as heroes? He can’t stand against terrorists and stand with the terrorists. And I’m wondering what a young Palestinian would think when he sees the leader of the Palestinian people embrace people who axed innocent men and women … or blew them up or riddled them with bullets. What’s a young Palestinian supposed to think about the future? What’s he supposed to think about what he should do vis-à-vis Israelis and vis-à-vis the State of Israel?

For their part, the Palestinians have sought to pre-empt the ostensible purpose of Kerry’s latest visit, which is to advance a framework for final status talks. A PLO official reiterated on Wednesday that the Palestinians would reject what they view as an interim approach.

“Kerry will try to market a mysterious and nonconstructive framework agreement to the Palestinian Authority during his new tour,” said PLO Executive Committee member Tayseer Khaled.

Khaled further accused the U.S. of siding with Israel’s security demands and turning a blind eye to announced plans to expand Jewish communities in Yehudah and Shomron.

Sidestepping the issue of terrorism and accusations of partiality for either side, Kerry said on Thursday, “My role is not to impose U.S. ideas but to facilitate the ideas of both parties.”

“Tough choices” will face both sides in the weeks ahead, he said, adding: “My plan to work with both sides to narrow differences on a framework that will set guidelines for negotiations.

“The framework will address all core issues,” Kerry said.

Kerry and Netanyahu will meet again on Friday afternoon. He will then meet with Mahmoud Abbas over the weekend. Then more consultations with Netanyahu after Shabbos, and he may hold additional separate meetings with both Abbas and Netanyahu on Sunday before heading to Jordan.

Officials are saying they expect no breakthrough at this stage.

Earlier on Thursday, a delegation of senior Likud politicians participated in a dedication ceremony for a new neighborhood in the community of Gitit in the Jordan Valley in a demonstration of their determination not to give up the area to the Palestinians.

Interior Minister Gideon Saar poured a bucket of cement onto the foundation of a new home in the small hilltop community of some 300 people, located 22 miles over the pre-1967 lines.

“It is wrong to precondition peace on the withdrawal of Jewish communities. This cannot bring peac,” Saar said.

“The Jordan Valley must be under Israeli sovereignty forever,” declared Deputy Foreign Minister Zeev Elkin (Likud) at the ceremony. “Now of all times, in a government headed by Likud, in a place built by Likud, we can say loud and clear: You will remain here forever and there will be Israeli sovereignty here.”

Elkin added: “To all those who are now making proposals for Israeli withdrawal to the 1967 borders, there is only one reply, which was already given in 1969 by then-foreign minister Abba Eban: The 1967 borders are Auschwitz borders! The only reply that Likud government should give to such proposals is: No! It’s right to talk to our neighbors, but it’s illogical for them to ask us to give up the security of Israel’s inhabitants and Israel’s vital interests. Anyone who gives up the Jordan Valley will turn Kfar Sava into Sderot.”

Kerry was also greeted on Thursday by an estimated 300 people demonstrating for the release of Johnathan Pollard. They gathered outside Kerry’s hotel in Yerushalyim where they chanted slogans and held placards.

The demonstration was organized by the Bar Ilan Students Union.

Union chairman Matan Bar Noy said it was intolerable that Pollard was wasting away in jail.

“It’s hard for us to accept that dozens of murderers have been freed, while one of our [people] is languishing away in prison,” he said. “The students have said it is an obligation to join the struggle to free Pollard. I call upon the U.S. secretary of state and president to free Pollard at once.”

“This has turned into a giant wound in the people’s heart and the Jewish nation’s heart,” said Labor MK Yehiel Bar. “Particularly because everyone understands that Jonathan Pollard has served time in an unproportional manner, beyond all logic. I am calling for the immediate release of Jonathan Pollard.”