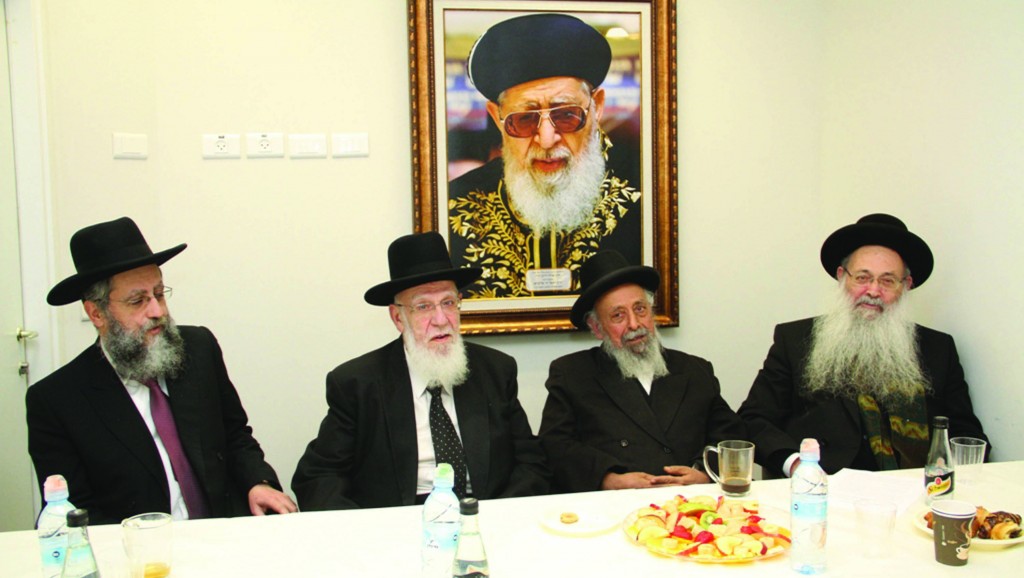 The Moetzet Chachmei HaTorah of Shas, Harav Shalom Cohen, Harav Shimon Baadani, Harav David Yosef and Harav Moshe Maya, gathered on Wednesday evening to discuss the burning issues of the day regarding the religious persecution by Israel’s government. This is the first meeting of the Moetzet since the passing of Harav Ovadiah Yosef, zt”l.

First, the Rabbanim met in the Shas office in Har Chotzvim in Yerushalayim and received an overview from Shas Chairman Rabbi Aryeh Deri on developments in the political sphere about the draft law. Deri also updated the Rabbanim on the decision to appeal to the High
Court over the District Court decision to hold new elections in Beit Shemesh.

The MKs of the Shas faction then entered the room and heard the opinion of the Moetzet regarding the issues, mainly the pending draft law, and the danger it poses to yeshivah students.

The Moetzet Chachmei HaTorah decisions published after the meeting began with mentioning Harav Ovadiah Yosef, zt”l. “Harav Ovadia Yosef founded and led the Shas movement from the day of its establishment, and since his passing a huge void has formed among us and we have no replacement for him. It is our obligation to continue his path and to make sure that his great endeavors to restore the crown to its glory are perpetuated.

• “The Moetzet Chachmei HaTorah in Eretz Yisrael heard with great concern from the chairman of the movement, Rabbi Aryeh Deri, and other faction members about the anti-religious legislation that has been mounting in recent days, especially regarding the draft and chinuch issues, and declares that we vigorously oppose any compromise regarding the drafting of those who learn Torah, and demand that the government immediately organize their status so that they can continue to sit and learn the holy Torah, upon which the entire existence of the nation in Eretz Yisrael is contingent. As Harav Saadia Gaon said, ‘Our nation is not a nation except with its Torah’…How much distress Harav Ovadiah Yosef felt over this until his final days.

“Woe to us that in our day, in the Holy Land, they are threatening to throw those who learn Torah, and who are the perpetuators of the Jewish legacy for coming generations, into prison.

“Likewise, regarding the pure chinuch of Jewish children, the Moetzet authorizes and strengthens the chairman of the movement and the principals of the Maayan Hachinuch HaTorani Bnei Yosef network to strengthen the chinuch of Jewish children in the traditions of Am Yisrael, as has been passed down to us for generations, and as was practiced in the network from the day it was founded, in accordance with the decisions of Maran, zt”l, and, ybl”c, the members of the Moetzet Chachmei HaTorah.

• “The Moetzet Chachmei HaTorah offers support for the mayor of Beit Shemesh, Rabbi Moshe Abutbul, and instructs the residents of Beit Shemesh, especially the Sephardic community, to rally around him and wishes him a lot of success in his battles on behalf of the public in the city.

• “The Moetzet Chachmei HaTorah expresses its pain over the difficult economic situation, under which, as a result of this government’s policies, hundreds of thousands of families are collapsing under the burden and cannot sustain themselves with dignity and bring bread and food for their children, and thousands of elderly people cannot live their lives and are forced to beg for money to subsist.

“It is clear that the government that does know how to act with the proper respect towards the Torah and Jewish traditions does not know how to treat elderly people, children and needy populations who are begging for help, with respect and compassion. As Rabi Elazar ben Azarya said, (Avos 3:17) ‘If there is no Torah, there is no derech eretz.’ And Shlomo Hamelech said (Mishlei 31:13) ‘He closes his ears to the cries of the poor and even when he calls he will not be answered.’