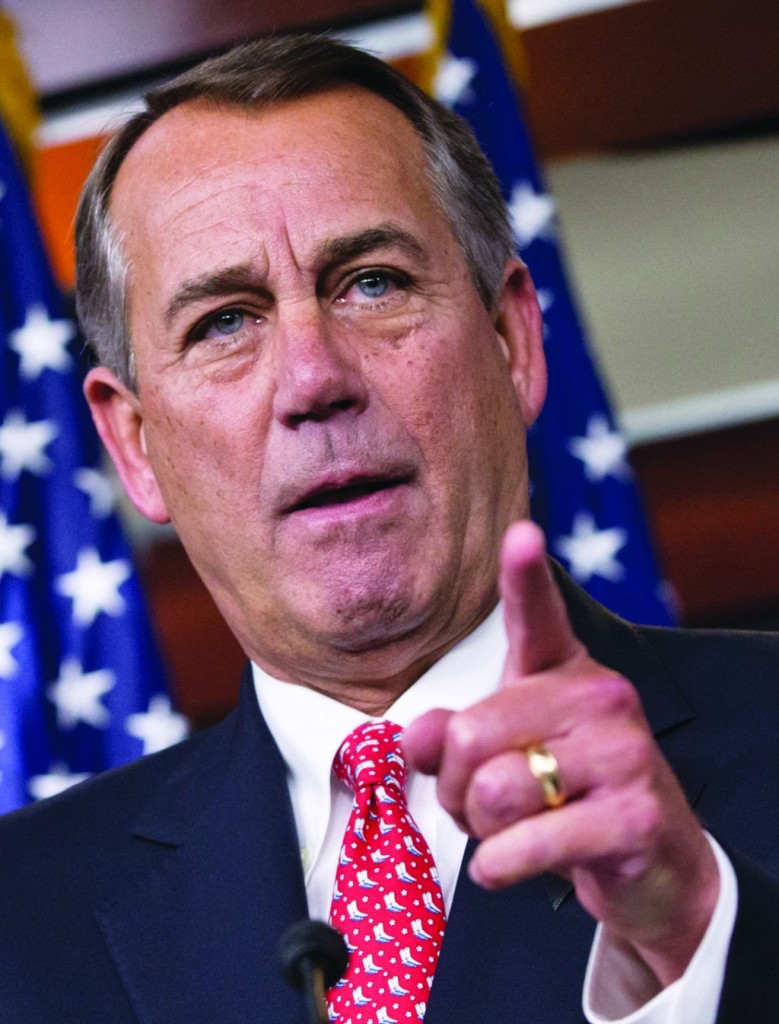 It says a lot about House Speaker John Boehner’s rough 2013 that even friends debate over when the low point hit.

Some say it was Jan. 3, the first day of the 113th Congress. With the Ohio Republican’s family watching from the House gallery, a dozen defiant GOP lawmakers refused to back his bid to be re-elected speaker. The mini-rebellion fell short but it delivered an embarrassing rebuke from conservatives.

To others the nadir came in September. That’s when Republicans ignored his advice and embraced a politically disastrous strategy of partially shutting down the government in a futile effort to force repeal of President Barack Obama’s prized health-care law.

Boehner, 64, still has serious problems with tea party conservatives inside and outside Congress that limit his power. But many say he stabilized his standing among his Republicans in the final weeks of 2013 and that he ends the year stronger than ever with them.

“The speaker started out, like the Republican Party, really in a ditch,” said Ron Bonjean, a GOP consultant and former congressional leadership aide. By the time the year was over, Republican lawmakers learned, “If they listen to him, he can guide them correctly.”

Boehner’s ups and downs underscore the difficulties of managing a narrow 232-201 GOP majority — with two vacancies. The 2010 and 2012 freshman classes’ tea party members would be tough for any leader to control, Democrats and Republicans agree.

October’s 16-day partial government shutdown ended in a GOP defeat that damaged Boehner’s party in public opinion polls but won him the respect of GOP colleagues. The 12-term House veteran let conservatives play out their ill-fated effort to dismantle the health-care law, and his warnings proved correct.

At year’s end, House Republicans voted overwhelmingly in favor of a bipartisan budget deal that will likely avert a government closure for the next two years, enabling Republicans to spend the 2014 election year on offense attacking Democrats over their widely unpopular health-care law.

“I think his stock has risen tremendously, and certainly he has great security as our leader and our speaker,” conservative Rep. John Fleming (R-La.), said of Boehner at the conclusion of the October shutdown.

“He needed to demonstrate, not only to our membership but probably to the Republican base outside Washington, that he was willing to go as far as possible and maybe farther than was prudent in pursuit of conservative goals,” added Rep. Tom Cole (R-Okla.), a Boehner supporter. “And he was spectacularly vindicated, where it ended up.”

Even so, Boehner’s relations with many conservatives remain icy. That’s a problem, considering the dozens of tea party-backed Republicans who sometimes abandon him on House votes and the GOP’s desire to motivate conservative voters for next year’s congressional races.

Boehner himself highlighted the schism between him and prominent conservative organizations twice this month, accusing groups like Heritage Action for America, the Club for Growth and FreedomWorks of “misleading their followers” in hopes of driving up their own membership and raising money. Such groups often pressure GOP lawmakers to oppose bills, including the recent budget deal, which Boehner strongly backed.

“He certainly ended the year on a sour note, declaring war not on national groups like FreedomWorks but on a huge constituency of voters that are a decisive factor in Republican elections,” said Matt Kibbe, president of FreedomWorks.

Democrats say Boehner is becoming the face of the deeply unpopular Congress, a clear political liability. They consider him a weak speaker who has little clout with tea party members and thus only tenuous control of the chamber.

On several crucial bills this year, they note, Boehner could get only a minority of House Republicans to vote for them and needed strong support from the Democratic side of the aisle to prevail. These included the October measure ending the government shutdown, a bill to provide billions of dollars in aid for Hurricane Sandy victims and last January’s “fiscal cliff” law preserving former President George W. Bush’s tax cuts, except for the wealthiest Americans.

“Talk about leading from behind. It’s very clear that for most of this year, the far right forces in his caucus have essentially led him,” said Rep. Gerald Connolly (D-Va).