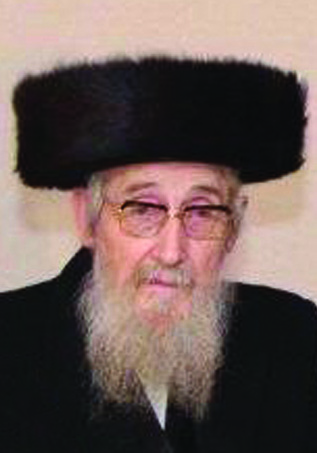 The New York Torah world lost a longtime Rav and posek with the sudden petirah Monday afternoon of Harav Avrohom Chaim Spitzer, Rav of Boro Park’s Khal Ohr Hachaim, a prolific marbitz Torah and a giant in chessed and askanus. He was 83.

“Ay, I was with him for 45 years and I was hoping to be with him longer,” sighed Yoel Benedek, a longtime talmid of Rav Spitzer’s, who was in his shul shortly after the petirah.

“Rav Spitzer,” said Yoel Friedman, a member of his kollel, was “an old fashioned Hungarian Rav … there are no more like him.”

Considering himself close to all Rebbes and Rabbanim, Rav Spitzer was beloved by the mosaic of Boro Park’s community, with hundreds of people attending his weekly Shabbos shiur. The Amshinover Rebbe of Boro Park, Harav Yitzchak’l Kalish, zt”l, selected him to be a witness on his tzava’ah, he would attend the Rachmastrivke Rebbe of Boro Park’s tisch several times a month, and he considered himself a Chassid of half a dozen Gedolim.

He had an extraordinarily close relationship with the Rebbes of Skver, Amshinov, Vizhnitz, Skulen, Bobov and Stutchin.

“He ran to every gutte Yid,” said Beri Spitzer, a nephew.

Mr. Benedek estimated that over a career in harbatzas haTorah spanning the better part of a century, Rav Spitzer delivered more than 40,000 shiurim, including his weekly Pirkei Avos shiurim in the summer, which were attended by hundreds of people.

Since opening his shul on Boro Park’s 14th Ave. and 49th St., Rav Spitzer never stopped his daily regimen of five or six shiurim, not going on vacation even during the summer. (Asked why he never went on vacation, his response was that he felt a responsibility that at least one moreh horaah should be in Boro Park at all times.)

Born in 1930, in Besermien, a small village in Hungary, to Reb Binyamin Zev and Mechtche Spitzer, Avrohom Chaim was sent away to the Hungarian city of Bater, where he had his bar mitzvah as World War II raged around him.

His father left for the U.S. before the war, intending to send for his family as soon as possible. That spared him from the fate that befell the rest of his family. The Spitzers were all deported to Auschwitz. Miraculously, they all survived.

Reb Binyamin Zev Spitzer had a jewelry store on Delancy Street on the Lower East Side, later moving to Crown Heights. He was a thoroughly chassidishe Yid, a Chassid of the Chakal Yitzchok of Spinke, Hy”d, and then of Harav Hershele Spinke, zt”l.

When Avrohom Chaim arrived in New York, he went to learn in the Vienner yeshivah in Williamsburg, under Harav Yonasan Steif, zt”l. Harav Steif, himself considered a Gadol in Torah and psak, was so impressed by the hasmadah and yedios of the youth that he traveled to Crown Heights specifically to meet Rav Spitzer’s mother.

“I want to see the mother who brought up such a child,” he said.

Beri Spitzer recalled his uncle saying, “Since I was 3 years old, I never forgot anything I learned.”

Determined to rebuild the Hungarian mesorah of Torah and Halachah, Rav Spitzer threw himself into his studies following the war. His photographic memory and tremendous hasmadah aided his development into a noted posek and brilliant talmid chacham. Through his life, he was mechaber the multivolume Chayei Avraham on the Chayei Adam.

Rav Spitzer’s hasmadah during those days was so intense that Reb Michoel Ber complained to his mother that he was learning through the night. Was there any way that she could convince him to go to sleep, he wondered?

Rav Spitzer learned in several yeshivos, studying both lomdus and psak in Beis Medrash Elyon by Harav Reuven Grozovsky, zt”l, and by the Shoproner Rav, zt”l. He also began a decades-long relationship with the Posek hador, Harav Moshe Feinstein, zt”l. He simultaneously was a maggid shiur at Harav Manis Mandel’s Yeshivah of Brooklyn and in the Vienner Yeshivah.

After living in Williamsburg where he was a Dayan in the Vienner kehillah, he moved with the Skverer Rebbe, zt”l, when the latter opened the Skverer shtetl in Rockland County 50 years ago. While he eventually moved on to Boro Park to open his own shul, most of his family remained Skverer Chassidim.

Beri, an aide to Councilman David Greenfield of Brooklyn, said that, in his opinion, Rav Spitzer was a one-of-a-kind Gadol, who was an authentic Rav with full knowledge of the ancient Hungarian mesorah and minhagim, while studying in both Litvishe and chassidishe yeshivos.

“Whenever I met him he was learning,” Beri said wistfully. “Either he was giving a shiur, or he was learning by himself or paskening she’eilos. There were no other things.”

Even when he ate, Rav Spitzer would continue learning, taking his meals in his study, a Gemara propped up in front of him.

Beri remembered his grandfather’s brother as a warm head of the extended family, who showed in ways large and small that he cared for each and every one of them. He worried incessantly about his family and wider circle of friends and admirers.

“He would call me during the day, “Hello, how are you? How is your day going? Is everything all right? I am thinking about you.”

Beri said that the calls made him feel so good, and many other said they got the same calls.

“It was my pride that I could say that Rav Avrohom Chaim Spitzer was my uncle,” Beri said.

He noted that although Rav Spitzer was one of the neighborhood’s prominent Poskim and world class talmidei chachamim, he thought nothing of mentioning his younger relatives during his divrei Torah in front of hundreds of listeners, or of teaching them their bar mitzvah pshetl.

Beri recalled how he was once learning with his father during his uncle’s daily shiur, which was taking place on the side of the beis medrash. “Beri,” Rav Spitzer called out to him suddenly, interrupting his shiur, “that is not the correct pshat in Rashi.”

Aside for having Shas and all four parts of Shulchan Aruch on his fingertips, Rav Spitzer knew countless chassidishe sefarim by heart, and his copy of Sfas Emes was riddled with his footnotes. He knew the yichus of all the major chassidic dynasties and their yahrtzeiten, and the minhagim every kehillah in Klal Yisrael had on any given thing.

Every morning after Shacharis, Rav Spitzer would say over stories about tzaddikim, in the inimitable fashion of the old Hungarian Rabbanim. Associates estimated that he must have repeated thousands of stories over the years, all of which he repeated accurately.

“He was like an encyclopedia in Torah, in everything,” Beri said, adding that he never told his uncle something that he hadn’t known already.

Beri recalls a humorous story. A group of kollel yungeleit who discovered an obscure halachah wanted to have some fun by calling various Rabbanim with the she’eilah. Phoning Rav Spitzer one morning, the caller began with saying that his wife had been cooking, and then laying out the question.

“First of all,” Rav Spitzer said immediately, “you don’t farher Rabbanim. But you asked already so here is the answer.” He then gave his psak to the little known halachah.

Shocked, the caller asked how the Rav knew that it wasn’t a real she’eilah.

“Simple,” Rav Spitzer replied conspiratorially. “You said that your wife cooked something. Which woman cooks at 10 o’clock in the morning?”

Beri marveled at how Rav Spitzer was known among Rabbanim in Boro Park that the hard she’eilos could be sent to his door. Yet, he had no problem picking up the towels from the mikveh floor or doing menial tasks in the shul.

He humbled himself before every other Rav, even those younger or clearly less learned than him. He would insist at simchos that his older brother be seated in the more respectable place.

Obeying a dictum from his rebbi, Harav Michoel Ber Weismandl, zt”l, Rav Spitzer always spoke about his experiences during the war.

“Reb Michoel Ber told me that I should not stop talking about the war,” he said. During the Kinos recital on Tishah B’Av, Rav Spitzer would cry from the beginning of Kinos until the end, bemoaning the loss of the six million Yidden.

He would cry often during davening, krias haTorah or other occasions. One Purim, when he cried during the Megillah, a nephew made a joke about it later in the day.

The next day, that nephew got a call. Rav Spitzer was on the phone.

“Burech, you asked me about my crying,” he said. Rav Spitzer then gave him a lengthy explanation of all the Midrashim and hidden peirushim behind every place where he cried.

“Now you understand why I cry?” he concluded.

Along with his vast amount of shiurim and harbatzas haTorah, Rav Spitzer also performed acts of chessed for both the Klal and the individual.

At the levayah, a family member said that they were just becoming aware of the vast amounts of tzedakah Rav Spitzer had giving away to help others, even borrowing to continue his chessed activities. The family, he said, was asking lenders to contact them that they could be repaid.

Rav Spitzer had a list of people he trusted, to whom he would hand envelopes stuffed with cash. “Go give this to this person and this envelope to that person, but make sure that they don’t know who it’s coming from,” was his refrain.

Yoeli Benedek, who was Rav Spitzer’s gabbai tzedakah for more than 30 years, said that the chessed that he did was on an astronomical scale.

“He did things that nobody else would do,” Mr. Benedek said, “and all [in a way] that nobody should know.”

“There is no one who could take over in all the things that he was involved in,” Rabbi Friedman said.

A few months ago, Rav Spitzer underwent a heart valve replacement to correct a heart condition. Following the successful procedure, he was planning a seudas hodaah for his family and shul members this past Friday night.

Thursday night was a regular evening for Rav Spitzer. He spent a long time helping someone on the phone, answered a she’eilah, and took a walk with a nephew.

During the weeks of Shovavim, Rav Spitzer would wake up early on Fridays to say Tehillim before Shacharis. This past Friday, he did not wake up. He was hospitalized unconscious, as Yidden around the world davened for his recovery. But he was niftar on Monday afternoon, surrounded by his family.

The levayah was held at 7:00 Monday night in his beis medrash, with kevurah at the beis hachaim in Skver, near his parents and Harav Moshe Neuschloss and Harav Zalman Ungar, previous Rabbanim of Skver. The unofficial chelkas harabbanim is located near the Skever Rebbe’s Ohel.

Shivah will be observed at 1424 49th St. in Boro Park until Monday morning.

Correction: an article in Tuesday’s Hamodia mistakenly said that Rav Spitzer’s mother was killed in the war. We regret the error.