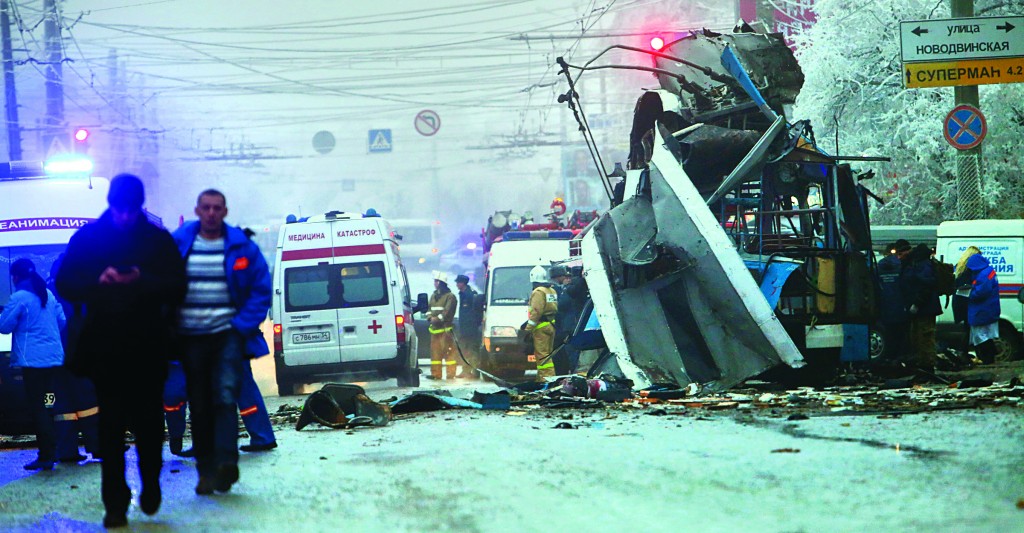 Russia calls for unity in fight against terrorists

A bomb ripped a bus apart in Volgograd on Monday, killing 14 people in the second deadly attack blamed on suicide bombers in the southern Russian city in 24 hours and raising fears of terrorist attacks on the Winter Olympics.

President Vladimir Putin, who has staked his prestige on February’s Sochi Games and dismissed threats from Chechen and other Islamist terrorists in the nearby North Caucasus, ordered tighter security nationwide after the morning rush-hour blast.

The previous day’s similar attack killed at least 17 in the main rail station of a city that serves as a gateway to the southern wedge of Russian territory bounded by the Black and Caspian Seas and the Caucasus mountains.

On Monday, the blue and white trolleybus — powered by overhead electric cables — was reduced to a twisted, gutted carcass. Bodies were strewn across the street in advnace of Jan 1st.

Windows in nearby apartments were blown out by the blast, which Russia’s foreign ministry condemned as part of a global terrorist campaign.

“For the second day, we are dying. It’s a nightmare,” a woman near the scene told Reuters, her voice trembling as she choked back tears. “What are we supposed to do, just walk now?”

“Identical” shrapnel to that in the rail station indicated that the two bombs were linked, investigators said.

There was no immediate claim of responsibility for either of the two attacks. Investigators said they believed a male suicide bomber was responsible for Monday’s blast. In Sunday’s attack, the federal Investigative Committee initially described the bomber as a woman from Dagestan, a hub of Islamist militancy on the Caspian, but later said the attacker may have been a man.

Citing unnamed sources, the Interfax news agency said the suspected attacker in Sunday’s blast was an ethnic Russian convert to Islam who had moved to Dagestan and joined terrorists there early in 2012.

Volgograd was also the scene of an attack in October, when a woman from Dagestan killed seven people in a suicide bus blast.

The violence raises fears of a concerted campaign before the Olympics, which start on February 7 around Sochi, a resort on the Black Sea at the western end of the Caucasus range, 450 miles southwest of Volgograd.

In an online video posted in July, the Chechen leader of insurgents who want to carve an Islamic state out of the swathe of mainly Muslim provinces south of Volgograd, urged terrorists to use “maximum force” to prevent the Games from going ahead.

“Terrorists in Volgograd aim to terrorize others around the world, making them stay away from the Sochi Olympics,” said Dmitry Trenin, an analyst with the Moscow Carnegie Centre.

North Caucasus terrorists have also staged attacks in Moscow and other cities, the most recent in the capital being an airport suicide bombing three years ago that killed 37 people.

International Olympic Committee President Thomas Bach condemned the “despicable attack on innocent people” and said he had written to Putin to express condolences and confidence that Russia would deliver “safe and secure games in Sochi.”

It was unclear why Volgograd has been hit, though it is close to the restive regions. It also has resonance in Russian national identity as the scene of the battle that turned the course of World War II, when the city was known as Stalingrad.

Putin visited in February to mark the battle’s 70th anniversary. City leaders have revived the old name for special occasions as Stalin’s image has been somewhat rehabilitated under Putin, while Stalin remains a hate figure to Chechens, whose nation was deported en masse on his orders.

Putin has staked his personal reputation on a safe and successful Olympics. This month, he freed jailed opponents including oil tycoon Mikhail Khodorkovsky and other political prisoners to remove causes for criticism at the event.

Putin was first elected in 2000, after winning popularity for a war on Chechen rebels who had bid for independence after the break up of the Soviet Union. Attacks by Islamist terrorists whose insurgency is rooted in that war have clouded his 14 years in power and now present his biggest security challenge.

In a statement, the Foreign Ministry called on world powers to stand together against “terrorists” and named Doku Umarov, the Chechen warlord who leads the insurgency in the North Caucasus, as among those fomenting violence.

“We will continue our consistent fight against an insidious enemy that can only be stopped together,” the ministry said.

Likening the Volgograd bombings to attacks in the United States, Syria, Afghanistan and elsewhere, it criticized those who seek to justify some such violence — an apparent dig at Western powers who have supported Syria’s insurgents and who, at least in the 1990s, showed some sympathy for Chechen rebels.

“The United States stands in solidarity with the Russian people against terrorism,” White House National Security Council spokeswoman Caitlin Hayden said. “The U.S. government has offered our full support to the Russian government in security preparations for the Sochi Olympic Games, and we would welcome the opportunity for closer cooperation for the safety of the athletes, spectators, and other participants.”