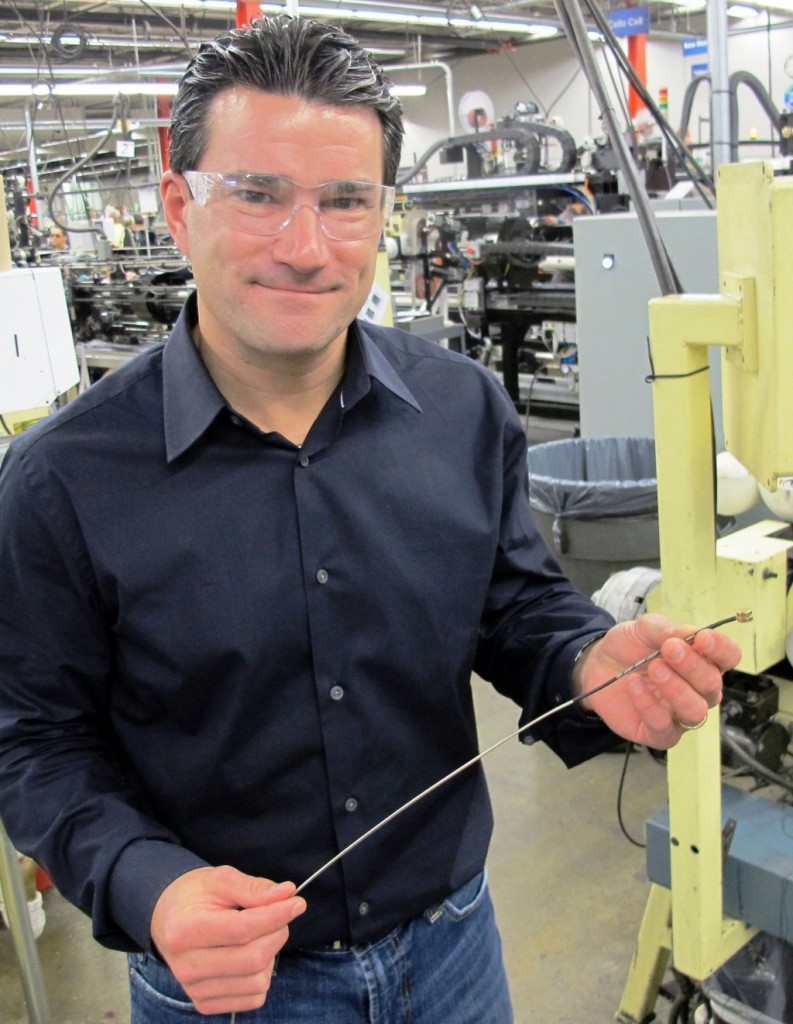 The economy is firming, hiring is on an upswing and consumers appear inclined to spend.

That’s good news for D’Addario & Co., a U.S. firm that manufactures the strings found on all sorts of musical instruments, from cellos to electric guitars.

Like many other U.S. manufacturers, it’s still trying to make up for ground lost during the Great Recession. It’s doing so in part by investing in technology that makes it lean, boosting output with fewer workers and smarter production.

“We’re not all the way back yet. We’re probably about 85 percent back” to pre-recession levels, said Rick Drumm, co-president of D’Addario in Farmingdale, a suburb of New York City.

“The entire music products industry, $7.5 billion in the United States … really has not had any growth in 10 years plus, when adjusted for inflation,” he said.

Indeed, even with recovery, the overall manufacturing sector is at best about three-quarters of the way back, less so when tech products such as semiconductors are taken out of the mix. At a contemporary peak, manufacturing represented about 21 percent of the U.S. economy in 1980. Today, it’s closer to 12 percent, and the sector employs about 12 million workers.

“The general economy fell only 4 percentage points in the recession, but manufacturing fell (almost) 20 percent,” said Daniel Meckstroth, chief economist for the Manufacturers Alliance for Productivity and Innovation, an industry research group. “Obviously, it’s going to grow faster because it went into a deeper hole, but it’s got more to make up.”

The long slog back is also reflected in the hiring numbers.

The sector lost more than 2 million jobs, or 15 percent of the manufacturing workforce, from December 2007 to June 2009 – a period spanning the Great Recession. The job losses continued beyond the official end of the recession, and at the end of 2009, the sector had its lowest employment level since 1941.

The sector has gained a little more than half a million new jobs since February 2010. That would be good in normal times. But these aren’t normal times.

A key reason is that manufacturers are rebounding in part thanks to greater productivity, getting more output from fewer workers.

“We’ve added 543,000 workers since the end of recession. My gut reaction is many of those people are different than the people they might have replaced,” said Chad Moutray, chief economist for the National Association of Manufacturers. “Because they are so much more skilled and manufacturing is much more advanced than it used to be, it further serves to increase those productivity gains.”

It helps to explain why recovery in hiring for manufacturers has been in fits and starts and remains well below pre-recession levels.

“It’s not like everything is great in manufacturing. It’s recovering. Demand is picking up. We’re trying to get to recovery of the previous cyclical peak and get on a growth path,” said Meckstroth. “First you’ve got to recover from what you lost.”

And that’s where D’Addario comes back into the picture. It’s an example of a company that’s managed to grow despite a shrinking marketplace. It’s won business from competitors, partly by freeing up more than 70,000 square feet of space for manufacturing and warehousing, and investing in technology and automation that, oddly enough, allowed it to bring back jobs from abroad.

The investment and expansion began in 2007 and picked up pace during the downturn. It allowed the company to price more competitively and hold its ground. Real growth has been a few percentage points a year, but that’s huge, given the broader contraction in sales of musical instruments.

“It just goes to show you that it is possible to compete,” said John D’Addario III, co-president and fourth-generation family member to head the company, which makes 700,000 strings a day on three shifts.

On a tour of the plant in a New York office park, D’Addario showed off machines, housed in a 110,000-square-foot facility, that were designed by the company’s own engineers to create what the company calls “lean” manufacturing. The concept builds on advances in robotics, software and other evolutionary technology. The company is acquiring 30,000 more square feet of space, and has moved one of its high carbon steel mills to Long Island to be closer to final production and reduce the need for costly inventory.

That’s a trend seen across the manufacturing sector.

“Manufacturers have learned to be a lot more lean, do a lot more with less,” said Moutray, with the National Association of Manufacturers. “In kind of a twist, those efforts to increase productivity have made the U.S. a lot more attractive (for investment) on a global scale. Those investments in technology and innovation … have also helped to increase U.S. viability in terms of manufacturing.”

In a report on manufacturing released Dec. 17, the Joint Economic Committee of Congress listed among reasons for an upswing “productivity gains, increases in labor costs among key competitors, lower natural gas costs … and the benefits of locating production and research and development in close proximity.”

Lean manufacturing is even more a necessity given that there are few signs that sales of guitars, electric basses and drum kits are ready to soar anytime soon. D’Addario also makes drum heads, cymbals and drumsticks, but from a peak in 2005, drum sales are down 44 percent across the industry. And since 80 percent of drum-set sales are for entry-level drummers, and of those, about half are electronic drums rather than conventional sets, it’s another troubling number.

And it may seem surprising, but guitars assembled in China for export to the United States have U.S.-made strings. That’s how price-competitive D’Addario has become, out of necessity. It has also led to a weird challenge from abroad.

“Our biggest competition in China is our own brand,” said D’Addario, explaining that the company has had to devise a coding system on every package so that consumers can register online to ensure their product is not a fake.

More broadly, manufacturing continues to face unique challenges. The export market for U.S. manufactured goods has been hurt by the ongoing European debt crisis, now finally appearing to ebb. And a general slowdown in Asia hasn’t helped, where giant China has grown at rates below the blistering pace that characterized the prior decade.

Then there’s housing, the trigger for the 2008 financial crisis. Housing starts, which were in the ballpark of 1.6 million to 1.7 million per year before the crisis, will close this year in the range of 900,000 units. And this slow rebound in housing spilled into the manufacture of everything from wood cabinets to textiles for draperies.

But sales of both new and existing homes appear to be picking up now, and it’s led to some growth for manufacturers. Manufacturing of wood products rose 3.2 percent in November and 9.7 percent from the prior November, according to industrial production data from the Federal Reserve.

Similarly, furniture production rose 9.1 percent from November 2012 to November 2013, “the fastest pace since the late 1990s,” Neil Dutta, head of economics for Renaissance Macro Research, wrote in a Dec. 17 note to investors.

The housing market, he added, now “is supporting the industrial sector.”