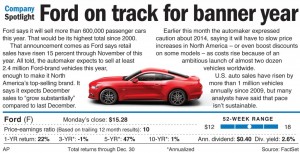 Ford has sold more than 2.4 million vehicles in 2013, and expects to retain its best-selling title in North America in 2013 over Toyota.

The automaker expects to widen its lead with record sales of the Fusion, Escape and Fiesta, strong demand for the Focus and a tripling of hybrid sales in 2013. Ford also has the single best-selling vehicle in the U.S. with the F-Series pickup, sales of which will easily exceed 700,000 this year, boosted by an improving economy with more housing starts and increased commercial construction.

In 2012, customers bought 329,677 more Fords than Toyotas. While December sales will not be released until Friday, Ford expects a much bigger lead. Through November, the Ford brand had sold 396,041 more vehicles than Toyota.

“The great news is that we are not overly reliant on any one segment – we’re seeing double-digit sales growth in cars, trucks and utilities,” said John Felice, Ford vice president, U.S. marketing, sales and service.

Detroit’s automakers traditionally have larger fleet sales than their Japanese competitors, but Ford said retail sales have risen 15 percent this year, better than any competitor over the same period. Total Ford sales were up 12 percent, including fleet sales. But Toyota executives this month said the Toyota division should end the year with the retail sales crown.

The most significant gains came from the import-dominated coastal markets, Felice said. Ford retail sales are up 23 percent on the West Coast and up 18 percent in the Southeast. Ford expects retail sales to exceed 1.7 million vehicles this year. That would be the best in six years.

To meet demand for the Fusion, Ford added production at its Flat Rock plant in the fall. While total Fusion sales are expected to exceed 290,000 in 2013, they still fall short of the top-selling Camry, which had sold almost 379,000 through November.

“With 16 launches next year, we’re looking to keep our sales momentum going,” Felice said of the record number of new vehicles slated to be launched in the new year in North America.