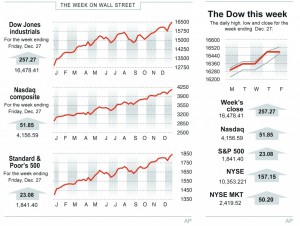 Bond yields continued to rise. The yield on the 10-year Treasury note climbed above the 3 percent mark. The yield hasn’t consistently traded above that level since July 2011. The increase will translate into higher interest rates on mortgages and other kinds of loans.

Energy stocks were among the biggest gainers after oil prices climbed above $100 a barrel for the first time since October. Offshore oil drilling companies Transocean and Diamond Offshore each rose about 1.5 percent. Oil giant ExxonMobil climbed 1 percent.

Sprint jumped 83 cents, or 8 percent, to $10.79 following news reports that Japan’s Softbank, which owns Sprint, may use the company as a vehicle to purchase wireless competitor T-Mobile.

Most of Wall Street remains on vacation. Trading volume has been very low this week. Only 2 billion shares changed hands on the New York Stock Exchange on Friday, about 40 percent below the recent average.

There were no major economic reports or corporate earnings Friday. 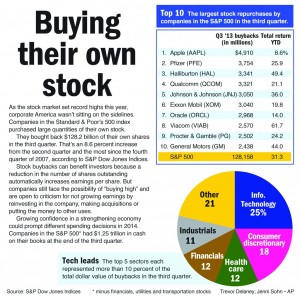 In the bond market, the yield on the 10-year Treasury note rose to 3 percent from 2.99 percent Thursday.

Bond yields have steadily climbed since Dec. 18, when the Federal Reserve announced it was paring back its bond-buying program. The purchases were aimed at keeping long-term interest rates low to encourage borrowing and hiring.

“Interest rates are on a road back to normalcy after being artificially suppressed by the Fed,” said Karyn Cavanaugh, market strategist with ING U.S. Investment Management. Cavanaugh said she expects the yield on the 10-year note to rise to about 3.5 percent by the end of 2014.

General Motors was also among the bigger movers Friday, falling 58 cents, or 1 percent, to $40.94. The automotive giant said it would have to recall 1.5 million cars in China to replace a bracket that secures a fuel pump.

Twitter fell $9.56, or 13 percent, to $63.75. Twitter has soared in recent days, prompting one Wall Street analyst to downgrade the company’s stock to the equivalent of “sell,” saying the rally was overdone. Even with Friday’s sell-off, the social media company’s stock is still up 53 percent this month.

This article appeared in print on page 8 of the December 30th, 2013 edition of Hamodia.