In Final Address, Bloomberg Thanks NYers for ‘Privilege’

Michael Bloomberg said Sunday that serving New Yorkers as mayor for the past 12 years has been an “honor and privilege,” as he winds down his third and final term by spending the last few weeks touting his accomplishments.

He delivered his 601st and final weekly radio address Sunday morning. In the four-minute address on 1010 WINS, Bloomberg said he was grateful New Yorkers elected him, a political neophyte.

“You took a chance on me in the dark days after 9/11, when the city’s future was so uncertain and our hearts were so heavy,” Bloomberg said. “I was a political outsider, a relative unknown, an entrepreneur with no government experience who asked for your trust. All I could offer you was a promise: That I would govern as a results-oriented leader, not a partisan politician.”

“That promise is often made in politics, but almost never kept,” he said. “I’ve worked every day to keep it.

Bloomberg said that he hired the most talented people without regard to party, and every decision made was based on principle, “not on campaign contributions or political calculations.”

“On Wednesday morning, I will wake up and smile, knowing that we did everything we could to achieve those goals,” he said.

On Thursday, Bloomberg peddled the city’s incarceration rate, which jails and probation commissioners say has dropped 30 percent below the national average in the last decade, to a new low.

That success is neither accident nor coincidence,” Bloomberg said. “It’s the product of a coordinated focus across our entire criminal justice system.”

Bloomberg credited innovative programs put in place to keep people out of jail for some of the improvement. And he noted that a new program is being introduced to match defendants who have mental-health problems with community-based services so they can receive treatment. 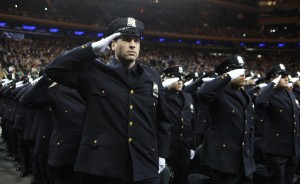 But the dramatic drop has not been accompanied by a similar decrease in the costs of jailing people. The city’s Independent Budget Office said this year that the city spent about $168,000 annually on each of its 12,300 inmates last year while it spent only $92,500 on each of 14,500 inmates in 2001.

On Friday, Bloomberg and Police Commissioner Ray Kelly presided over their last police academy graduation, at a ceremony in Madison Square Garden. The billionaire Bloomberg will now return to the private sector.

Following a private ceremony for his staff, Bloomberg will attend the inauguration Wednesday of his successor Bill de Blasio.

This article appeared in print on page 1 of the December 30th, 2013 edition of Hamodia.