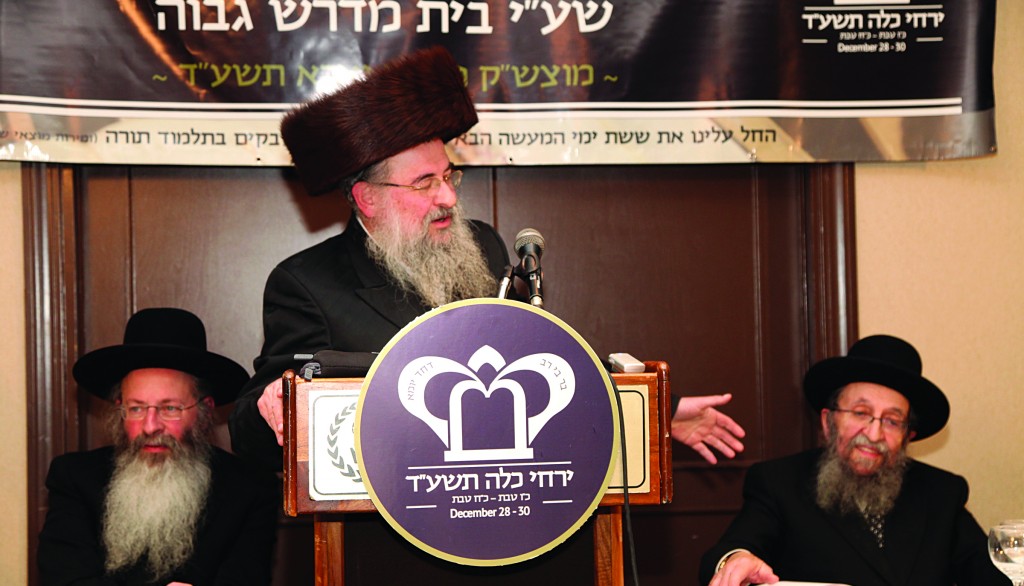 The eagerly anticipated Inaugural Bais Medrash Govoha Yarchei Kallah began Motzoei Shabbos with a bang, with more than 100 participants delving into the sugya d’kallah, Commerce and Business on Shabbos, with the same vigor and enthusiasm they once experienced as yungeleit in yeshivah.

Rabbi Moshe Yosef Drew, who acted as emcee at the opening melaveh malkah, expressed the common sentiment of the participants by stating: “Attending this Yarchei Kallah is going back to yeshivah. It is revisiting what we once had and all fondly recall. It is rekindling the feeling of what it means to be thoroughly immersed in a sugya.”

Rabbi Drew pointed out the tremendous appreciation of the participants to the Yarchei Kallah committee, who worked for weeks ironing out all the myriad details of the two-day affair. He also praised the participants for, “seizing this opportunity to immerse themselves in the sea of Torah.”

At the melaveh malkah, Harav Aryeh Malkiel Kotler, shlita, Rosh Yeshivah of BMG, quoted sources in Chazal that speak of the zechus of being fully ameil baTorah and placing one’s main focus on limud haTorah. He explained that when one shows that Torah is his main priority, as the Yarchei Kallah participants have shown, one’s entire life becomes a life of Torah, and even when he is working to earn a living it is as if he’s “toiling in Torah.”

Harav Shmuel Kamenetsky,  shlita, Rosh Yeshivah of the Philadelphia Yeshivah, came to Lakewood specifically for the melaveh malkah. He began his remarks by exclaiming: “There’s nothing to say to such an olam that has put aside everything else to come learn for two days. It is l’ma’alah min hatevah! There are no words to express it!”

Harav Noach Isaac Oelbaum,  shlita, Rav of Khal Nachlas Yitzchok of Kew Gardens Hills in Queens, then introduced the sugya d’kallah, weaving a tapestry of halachah and Aggadah, explaining the concept of shevisa on Shabbos, and how it applies to practical issues, notably the use of websites for commerce.

First seder on Sunday was a sight to see as the roar of the kol Torah of the over 100 yungeleit reached a crescendo. Harav Yosef Kushner, author of the newly published sefer, Commerce in Halachah, delivered the introductory shiur at the beginning of the  seder, and the seder ended with an in-depth shiur from Harav Chaim Kohn, shlita, on real estate issues that are relevant to Shabbos.

The participants continued “koching in learning” after the seder’s conclusion, with fiery discussions of the sugya taking place over lunch.

The rischa d’oraisa will continue until Monday evening, and will surely linger within the participants as they return to their daily lives.