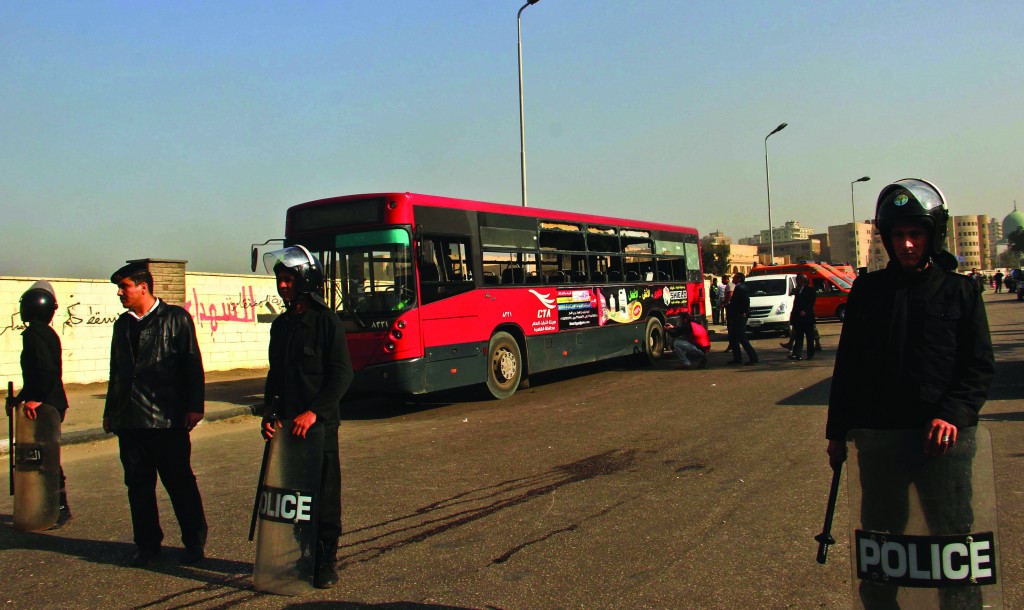 Egypt’s security authorities launched a sweep of arrests of Muslim Brotherhood members on Thursday and warned that holding a leadership post in the group could now be grounds for the death penalty after it was officially declared a terrorist organization, stepping up the government’s confrontation with its top political nemesis.

The announcement came as a bomb exploded in a busy intersection in Cairo Thursday morning, hitting a bus and wounding five people. Though small, the blast raised fears that a campaign of violence by Islamists that for months has targeted police and the military could turn to civilians in retaliation for the stepped-up crackdown.

The terrorist labeling of the Brotherhood — an unprecedented step even during past decades when the group was banned — takes to a new level the government’s moves to crush the group, which rode on elections to dominate Egypt’s politics the past three years until the military removed Islamist President Mohammed Morsi in July after massive protests against him.

The Brotherhood vowed to “qualitatively” escalate its protests against the new military-backed interim government, whose authority it rejects. The group has struggled to bring numbers into the streets in past months under a crackdown that has already killed hundreds of its members and put thousands more in prison, including Morsi and other top leaders — and there was little sign of any protests on Thursday.

The moves — all playing out before the backdrop of increasing violence by al-Qaida-inspired terrotists — raise the potential for greater turmoil as the country nears a key Jan. 14-15 referendum on a revised constitution, a milestone in the post-Morsi political transition. The government is pushing for overwhelming passage of the new document, while the Brotherhood vows to stop it with protests.

Ahmed Imam, spokesman for the Strong Egypt Party founded by ex-Brotherhood member Abdel-Moneim Abolfotoh, warned that the terrorism label “leaves the Muslim Brotherhood and its supporters only one choice, which is violence.”

Both sides are showing “a great deal of stupidity,” he said, blaming the Brotherhood for failing to firmly distance itself from violence and the government for closing doors to reconciliation.

“Don’t let any of the incidents happening now affect the will of Egyptians. Never,” he said. “Anyone who harms you will be wiped from the face of Earth.”