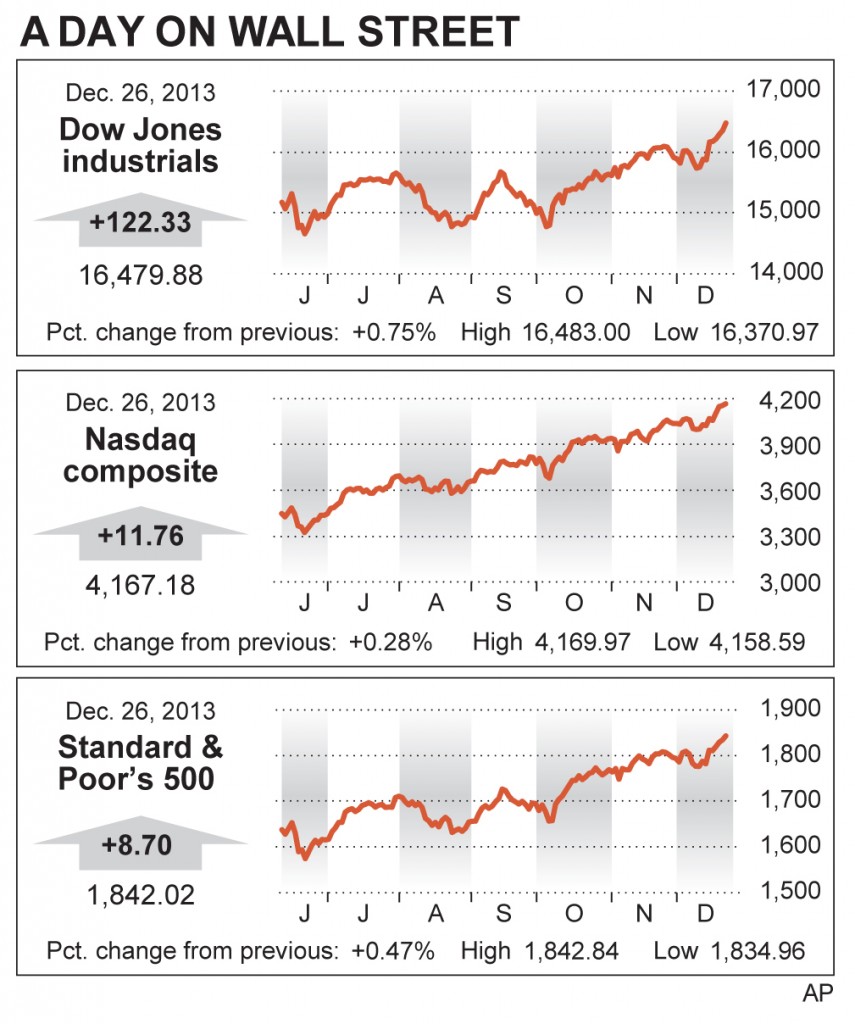 The stock market continued its upward climb Thursday as traders went back to work after the legal holiday, adding to what has already been a historic year for the market.

Traders were encouraged by an unexpectedly large drop in claims for unemployment benefits last week, the latest sign that the U.S. job market is improving. Trading volume was low, however, as most portfolio managers have closed out their positions for the year

The yield on the 10-year Treasury note, a benchmark for many kinds of loans, briefly crossed above the psychologically important 3 percent mark.

Bond prices fell, pushing the yield on the 10-year Treasury note to 2.99 percent from 2.98 percent Tuesday. The note briefly traded above 3 percent.

Yields have been climbing since late November as economic reports have suggested that the U.S. recovery is gaining momentum. The increase accelerated last week after the Federal Reserve announced it was cutting back on its bond-buying program. The yield last touched 3 percent in September. It hasn’t been consistently above 3 percent since July 2011.

“There’s a silver lining to see bond yields rise like this, because it’s a sign that the economy is getting stronger,” said John De Clue, chief investment officer of U.S. Bank Wealth Management.

Yields on Treasury securities like the 10-year note are used to calculate interest rates on student loans, mortgage rates, credit cards, and many other kinds of debt. As the 10-year yield has risen in the last six months, so have mortgage rates. In early May, the average mortgage rate was around 3.35 percent. This week it was 4.48 percent, according the government mortgage agency Freddie Mac.

Investors cheered the latest signal that the U.S. economy is improving. The Labor Department said the number of Americans who filed for unemployment benefits fell 42,000 last week to 338,000. The drop was far bigger than economists were expecting and an indication that fewer people were losing their jobs.

It was another slow day for Wall Street, with most investors on vacation and only three trading days left in 2013.

T-Mobile rose 74 cents, or 2.3 percent, to $32.93 after The New York Times and other news outlets reported that the Sprint division of Japan’s Softbank was looking to buy the wireless carrier.