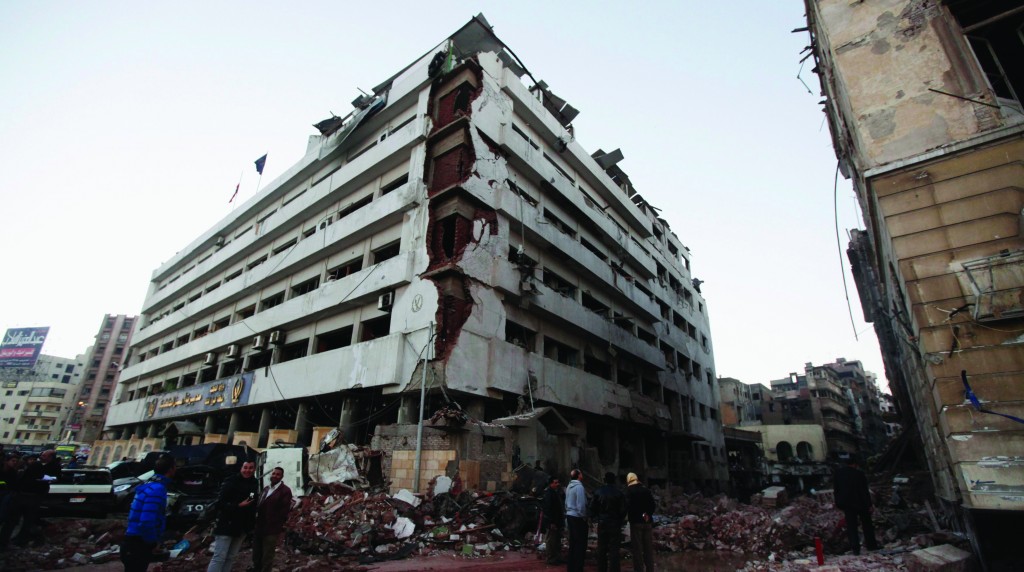 A suicide bomber detonated a car packed with explosives at a police compound in Egypt’s Nile Delta on Tuesday, killing 15 people, the interior ministry said, in one of the deadliest attacks since the army deposed President Mohammed Morsi in July.

At least 12 policemen were among those killed in the overnight blast in the city of Mansoura, north of Cairo, and about 140 people were wounded, security officials said.

The army-backed government vowed to fight “black terrorism,” saying the attack would not upset a political transition plan whose next step is a January referendum on a new constitution.

“We heard a loud noise and I found blood all over my body,” one wounded man told state media, speaking from a hospital bed with his head wrapped in bandages. “We all ran downstairs to find our colleagues on the ground in blood.”

The attack prompted a cabinet statement declaring Morsi’s Muslim Brotherhood a terrorist organization, though officials did not directly accuse the group of staging the attack.

The Brotherhood, which is already outlawed, condemned the bombing as “an attack on the unity of the Egyptian people”.

Later on Tuesday, hundreds of angry people in Mansoura stormed and torched buildings and shops they suspected to be owned by Brotherhood members, witnesses and state media said.

Others attacked and torched an empty bus after earlier seeing one of its passengers flashing the four finger hand sign symbolizing the killing of hundreds of Morsi supporters at a protest camp broken up by the police in August.

The blast underlined the risk of militancy moving to the densely populated Nile Valley from the Sinai Peninsula, where attacks have killed some 200 soldiers and police since July.

“We face an enemy that has no religion or nation,” Interior Minister Mohamed Ibrahim, the survivor of an assassination attempt in Cairo in September, said at the scene of the blast.

The interior ministry said the car bomb attack was carried out by a suicide bomber, citing evidence gathered at the scene.

The presidency said such attacks “only increase the state’s determination to uproot terrorism.” Police “combat units” would deploy across the country with orders to use live ammunition, state media reported.

Egypt has endured the bloodiest internal strife in its modern history since the army removed Morsi, the nation’s first freely elected leader, on July 3 after big protests against him.

Some analysts say Egypt could face a sustained Islamist insurrection, a risk compounded by a flood of weapons smuggled out of neighboring Libya since the uprising against Muammar Gadhafi began there almost three years ago.

The state has outlawed the Brotherhood and driven it underground, jailing thousands of its supporters and accusing the group of turning to violence, a charge it denies.

The Sinai Peninsula, which borders Israel and the Gaza Strip to the east, has been the site of most of the major attacks since Morsi’s ouster: a car bomb killed 10 soldiers there in November, and 24 policemen died in an August ambush.

Many of the Sinai attacks, as well as the failed attempt on the life of Ibrahim, the interior minister, have been claimed by a group called Ansar Bayt al-Maqdis (Supporters of Jerusalem).

There have also been lethal attacks on security forces in the Nile Delta, though nothing on the scale of Tuesday’s blast.

“An attack of this type has the effect of intimidating people and discouraging them from taking part in the (constitutional) referendum,” said Mustapha Kamel Al-Sayid, a professor of political science at Cairo University.

Ibrahim described the car bombing as an attempt to terrorize citizens before the mid-January vote, which is to be followed by presidential and parliamentary elections next year. He said the security forces would fully secure the referendum.

The bomb shattered the police building’s windows and badly damaged neighboring buildings, bringing down the wall of at least one in Mansoura’s town center, state media footage showed.

Mansoura has been the scene of other attacks since Morsi’s removal. Five policemen were wounded in July by an explosive device thrown at a police station. In October, three policemen were killed when masked men attacked a checkpoint in the city.

Last week state prosecutors ordered Morsi and other Brotherhood leaders to stand trial on charges including scheming with foreign militants to carry out terrorist attacks in Egypt.

The Brotherhood described those charges as laughable.