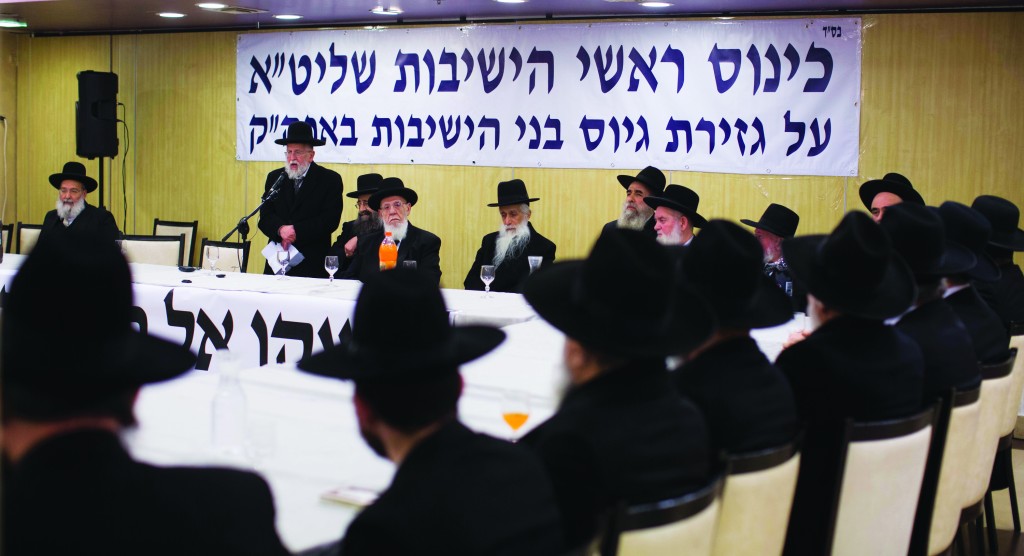 Under the heading “And They Called out to Hashem in Their Time of Trouble,” dozens of Sephardic Roshei Yeshivos held an emergency session concerning the approaching draft decrees threatening the yeshivos of Eretz Yisrael.

The meeting was held Sunday night in Yerushalayim, and was attended by over 50 Roshei Yeshivos of Sephardic institutions, headed by Hagaon Harav Shalom Cohen, Rosh Yeshivas Porat Yosef-Old City of Yerushalayim.

Harav Yehuda Cohen, Rosh Yeshivas Yakirei Yerushalayim and Be’er HaTalmud quoted Moshe’s statement to Pharaoh: “With our youths and our elders we shall go — and you will give us offerings.” Meaning, it is not enough that we go, but moreover, you will be the ones to provide us the offerings. And the same is true today. Not only are we not going into the army, but moreover, we will go out to bring youths of your camp to learn Torah as well.”

Harav Shalom Cohen cried out, “There are those who look upon us as the ‘weak link,’ and think that it will be easier to draft us. They’re making a mistake. We’re showing them that as long as we stand united, they don’t have a chance with us.”

During the course of the meeting, various suggestions were raised as to how to stand firm in the face of the harsh budget cuts, and the idea was raised of starting a special yeshivah fund based on donations from abroad to come to the aid of yeshivos and kollelim.