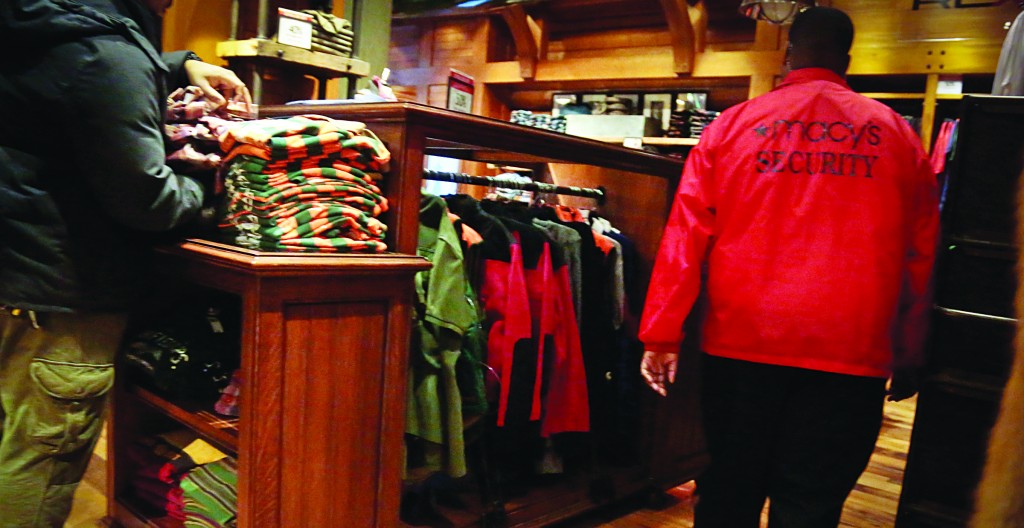 Outside the view of paying customers, people accused of shoplifting at Macy’s huge flagship store are escorted by security guards to cells in “Room 140,” where they can be held for hours, asked to sign an admission of guilt and pay hundreds in fines, sometimes without any conclusive proof they stole anything.

As customers jam stores during the year-end shopping season, claims of racial profiling at department stores in New York have helped expose the wide latitude that laws in at least 27 states give retailers to hold and fine shoplifting suspects, even if a person hasn’t yet technically stolen anything, is wrongly accused or criminal charges are dropped.

“You must remember, these people are not police officers; they are store employees,” said Faruk Usar, the attorney for a 62-year-old Turkish woman who sued Macy’s, which some customers say bullied them into paying fines on the spot or harassed them with letters demanding payment. “When they are detained, they are not yet even in a real jail.”

Industry-wide, more than $12 billion is lost to shoplifting each year. The laws, which vary in strictness and fine amounts, allow stores to try to recoup some losses. Under New York’s longstanding law, retailers may collect a penalty of five times the cost of the stolen merchandise, up to $500 per item, plus as much as $1,500 if the merchandise isn’t in a condition to be sold. A conviction is not necessary to bring a civil claim.

Some customers say stores have harassed them into signing admissions of guilt in order to turn a profit — not just recoup a loss.

Retailers don’t divulge how much money they recoup, but use it in part to offset security costs, said Barbara Staib, spokeswoman for the National Association for Shoplifting Prevention. The total is a fraction of what they lose, she said.

“We tend to forget that retailers are the victims of crime when it comes to shoplifting,” she said. Some stores are even forced out of business when the expense becomes too much.

But at least nine customers at Macy’s say in lawsuits that the retailer is abusing the law, wrongly targeting minorities and holding customers for hours, years after it settled similar claims brought by the state attorney general by paying a $600,000 fine and changing practices. That agreement expired in 2008.

Usar’s client, Ayla Gursoy, was detained in 2010 after she carried two coats in her arms up several flights of stairs in the flagship store, according to her suit. Store security accused Gursoy, who speaks little English, of trying to steal. She was asked to sign a form admitting guilt and pay a fine. She refused, the police were called and she was arrested.

Gursoy and others say they were held for hours in Room 140, a bare room with two small, barred holding cells with wooden benches within the store.

“Our policy of exercising our right to pursue a civil recovery payment is consistent with common practice in the retail industry and within the parameters of the law,” she said.

Many retailers detain suspected shoplifters, industry experts said, but few have dedicated jail cells and most don’t ask for payments on the spot like Macy’s.

Most of the accused receive letters in the mail demanding payment from a law firm like the one used by Macy’s, Palmer, Reifler & Associates, of Orlando, Fla. That firm also represents Home Depot, Wal-Mart and many other stores and sends out about 115,000 letters per month.

“We are confident in our clients’ training processes and procedures for evaluating and investigating theft matters,” attorney Natt Reifler said.

Letters sent to Gursoy said that if she didn’t pay, she would be sued. One said she owed $400; the next said she owed $675 — the increase unexplained.

“We believe the whole purpose of her detention was to get the signature, to get the payments,” Usar said shortly before his client’s suit was settled in court Dec. 4. The terms were not disclosed. Her criminal charge was dismissed after no witness could testify.

But lawyers say that retailers rarely actually sue for the money, and they often suggest letter recipients don’t bother paying because refusing won’t affect their credit.

“Retailers do a really good job of identifying where actual theft cases have occurred, and intervening and conducting investigations,” said Joseph LaRocca, who runs RetaiLPartners, an industry group aimed at building partnerships between retailers and law enforcement. “There are always exceptions, but by and large, there are few mistakes here.”

The racial profiling allegations started in New York this fall with a different retailer, Barneys New York, after two black customers said they were stopped while buying expensive merchandise. The retailer has said it does not profile, and neither customer was asked to sign a confession or pay a fine.

But the allegations grew to include Macy’s. Among those complaining was Rob Brown, a celebrity actor, who said he was stopped after buying a $1,300 Movado watch for his mother this summer.

Brown, 29, said he, too, was taken to Room 140. There, he said in a federal suit filed by attorney Doug Wigdor, others being held were all “individuals of color.” He was released, he said, when people realized he was a celebrity.