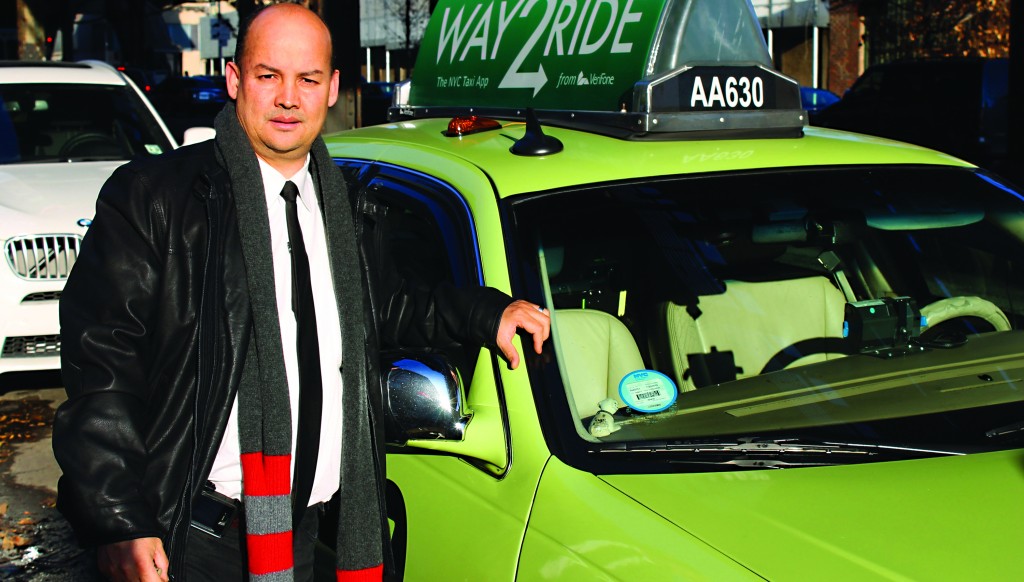 Six coats of DuPont GS028 paint did more than change Porfirio Valdez’s 2006 Lincoln Town Car from black to the color of a green apple — the new look almost doubled his income, too.

Valdez’s vehicle is one of the more than 2,100 Boro taxis to hit New York’s streets since August, when the newest class of livery car was rolled out to better serve New Yorkers outside Manhattan, where yellow cabs cluster. The green paint job means Valdez, 45, a native of the Dominican Republic, now earns about $1,200 per week, up from the $700 he made when his car was black and by law could provide only trips arranged through a dispatcher.

“It’s an excellent investment,” said Valdez, who lives with his wife and two children in the Bronx. “I’m very happy.”

The greening of the New York taxi — a symbol of the city akin to the Brooklyn Bridge or Empire State Building — is lowering the bar of entry for owner-drivers like Valdez who had been priced out of a market where a yellow-cab permit is valued at more than $1 million. It’s also ushering in a new era of transportation for the 6.7 million New Yorkers, or about 80 percent of the population, who live in neighborhoods where hailing a yellow cab is virtually impossible.

The permits may also have longer-term benefits for owners. New York’s Taxi & Limousine Commission sold the first 6,000 green-cab licenses in June, most for $1,500 each. The first resale was reported to the agency Dec. 13 for $7,000 — a 367 percent profit, excluding taxes and fees. A search of classified ads shows offers as high as $15,000.

“Livery drivers can now buy a stake in New York City’s boom economy,” said Graham Hodges, a historian at Colgate University in Hamilton, N.Y., and author of a book based in part on his five years as a city cabbie.

The introduction of green cabs is the most significant shakeup for drivers since 1979, when the TLC made them daily independent contractors instead of salaried employees of the fleet owners.

Green cabs offer almost all of the convenience and security of their yellow cousins. They’re outfitted with meters and credit-card readers, and require inspection. They differ only in three significant ways: street hails aren’t allowed south of West 110th Street or East 96th Street in Manhattan, or at the two airports; prearranged trips are allowed; and, of course, the color.

Before the introduction, the TLC estimated that more than 100,000 illegal trips took place each day as livery car drivers, known as gypsy cars, picked up passengers hailing on the street.

The gentrification of neighborhoods in Brooklyn and Queens has expanded “good fare zones” well beyond Manhattan, Hodges said. Green cabbies also benefit from the latest technology, such as Uber, an iPhone app that helps connect them with riders.

Mayor Michael Bloomberg first proposed outer-borough taxis in his 2011 State of the City address. Legislation passed by state lawmakers that year allowed the sale of 6,000 permits this year and as many as 12,000 more by 2015, 20 percent of which must be wheelchair-accessible. When all of them hit the road, their ranks will surpass the number of yellow taxi permits, known as medallions.

Mayor-elect Bill de Blasio, whose campaign was backed by medallion owners, has opposed the green-cab plan, saying it could threaten the industry’s stability.

About 44 green vehicles per day are getting “hacked up,” industry parlance for converting a car to a taxi, which costs about $3,000. More than 2,000 drivers have joined a waiting list to buy the next batch of green permits in June, when the price will rise to $3,000.

Not everyone is so enthused. Even though green cabs have GPS systems linked to meters to prevent them from picking up passengers in places off-limits, better enforcement is needed to prevent drivers and passengers from negotiating a cash fare, said Ethan Gerber, executive director of the Greater New York Taxi Association, a trade group of 2,500 mostly corporate medallion owners.

The average yellow cab driver doesn’t own the car he drives, having long been shut out of the market for the limited supply of 13,437 medallions, aluminum plates affixed to a taxi’s hood that make it official. The number will rise to 15,237 by 2017.

The average price was $1.05 million for an individual medallion and $1.32 million for a corporate medallion in November — up 665 percent and 675 percent, respectively, since 1993. They’ve outgained equities, oil and gold in that time.

Most medallions are owned by companies that lease cars to drivers in 12-hour shifts for $115 to $139. Drivers keep what fare revenue they earn above that, which typically averages about $35,000 per year.