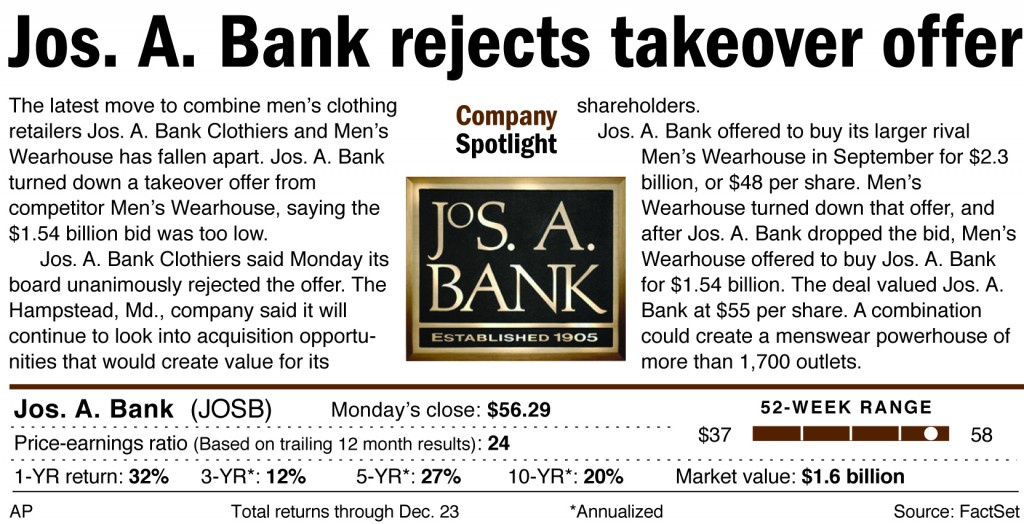 Jos. A. Bank rejected a takeover offer from competitor Men’s Wearhouse, saying the $1.54 billion bid is too low.

Men’s Wearhouse said Monday that it will “carefully consider all of our options to make this combination a reality.” That may include launching a proxy battle. Men’s Wearhouse said it could nominate director candidates at Jos. A. Bank’s next annual meeting.

It’s the latest twist in the effort to combine the two companies. Putting the two together would create a men’s clothing powerhouse, with more than 1,700 outlets. In September, a few months after Men’s Wearhouse ousted its founder and chairman, George Zimmer, Jos. A. Bank offered to buy its larger rival for $2.3 billion, or $48 per share. Men’s Wearhouse turned down that offer, and after Jos. A. Bank dropped the bid, Men’s Wearhouse turned the tables with its own offer for $1.54 billion, or $55 per share.

Jos. A. Bank Clothiers Inc. said its board unanimously rejected the offer from Fremont, Calif.-based Men’s Wearhouse. The Hampstead, Md., company said it will continue to look into acquisition opportunities that would create value for its shareholders.

In June, Men’s Wearhouse pushed out Zimmer, following a dispute over the direction of the company. In August the retailer completed its acquisition of JA Holdings, which owns the Joseph Abboud brand.

Jos. A. Bank sells men’s tailored and casual clothing and shoes. It’s known for promotions like buying one suit or sport coat and getting three for free. Men’s Wearhouse sells men’s clothing and suits through its namesake chain of stores, as well as Moores and the K&G retail chain. Recently, the company has been going after younger shoppers, with suits with slimmer silhouettes.