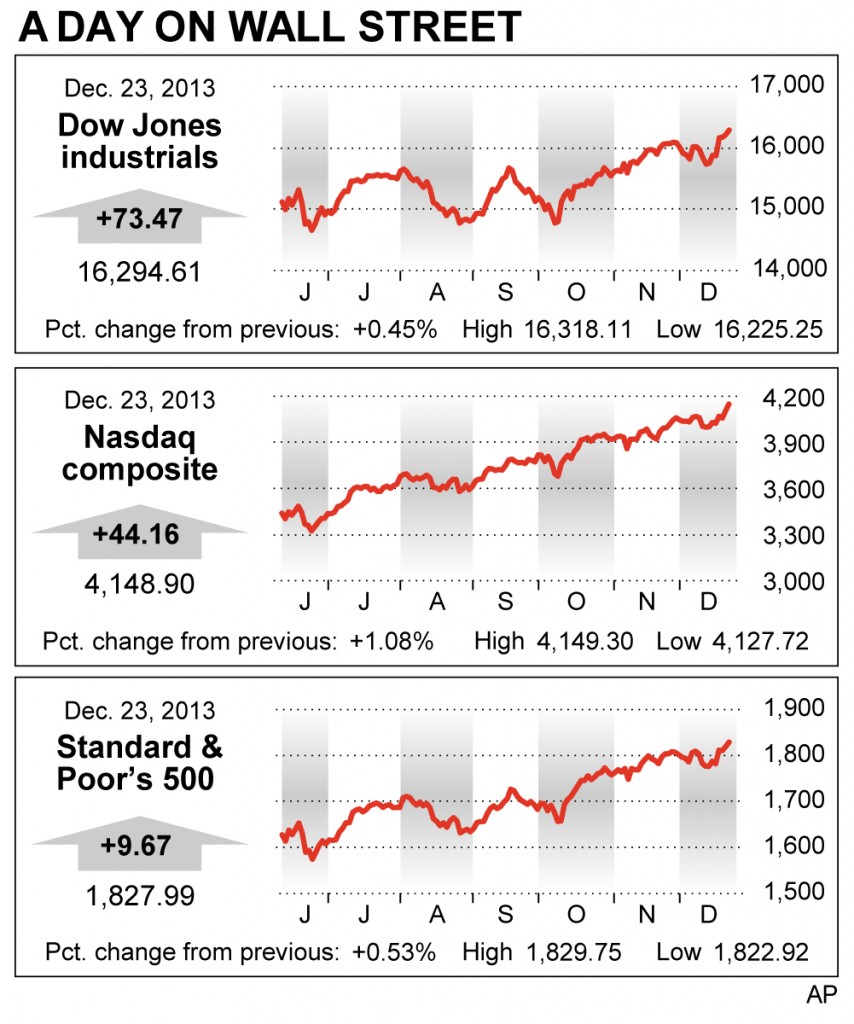 Stocks rose in quiet trading Monday as investors start to close the books on 2013.

Apple helped lift technology stocks after the company reached a deal to sell the iPhone to China’s largest wireless carrier.

The market has been moving broadly higher since last Wednesday, when the Federal Reserve said it will start pulling back on its stimulus program next month as the U.S. economy improves. Last week the government also raised its estimate for third-quarter economic growth to 4.1 percent, the fastest pace since 2011.

Apple rose $21.07, or 4 percent, to $570.09 after the company reached a deal with China Mobile, the world’s largest cell phone provider, to sell the iPhone in the world’s most populous country. The iPhone is already sold through two smaller carriers there. Technology stocks in the S&P 500 rose 1.5 percent, more than twice as much as the broader index.

Trading was very light. Just 2.8 billion shares were traded on the New York Stock Exchange, well below the recent average of 3.4 billion.

Both the New York Stock Exchange and the Nasdaq Stock Market will be closed Wednesday for the legal holiday. Both exchanges will also close at 1 p.m. Eastern on Tuesday.

The market is heading for its best year in more than a decade. The S&P 500 index has increased 28 percent so far this year — 30 percent when dividends are included — putting it on track for its biggest annual gain since 1997.

“People want to hold on to these gains, so no one is going to take any undue risks this close to the end of the year,” said Stephen Carl, head equity trader at Williams Capital. The next two weeks, with legal holidays falling in the middle of the work week, will likely have light trading, he said.

In other economic news, consumer spending rose 0.5 percent in November, the most since June. Those are closely watched figures, especially leading up to the end of the year.

Facebook rose $2.65, or 5 percent, to $57.77. The social network was added to the S&P 500 effective Monday. Fund managers who replicate indexes like the S&P 500 are required to purchase stocks in a company when it’s added.

Target fell 61 cents, or 1 percent, to $61.88 after The Wall Street Journal reported that sales fell 3 percent to 4 percent in last weekend. Target is dealing with a massive breach of security in credit and debit card data.

Bond prices fell slightly. The yield on the 10-year Treasury note rose to 2.93 percent from 2.89 percent.

Gold fell $6.70, or 0.6 percent, to $1,197 an ounce. Gold has slumped 29 percent this year and is headed for its first annual loss since 2000. Traders have dumped gold as the fear that the Federal Reserve’s easy-money policies would cause inflation dissipated.