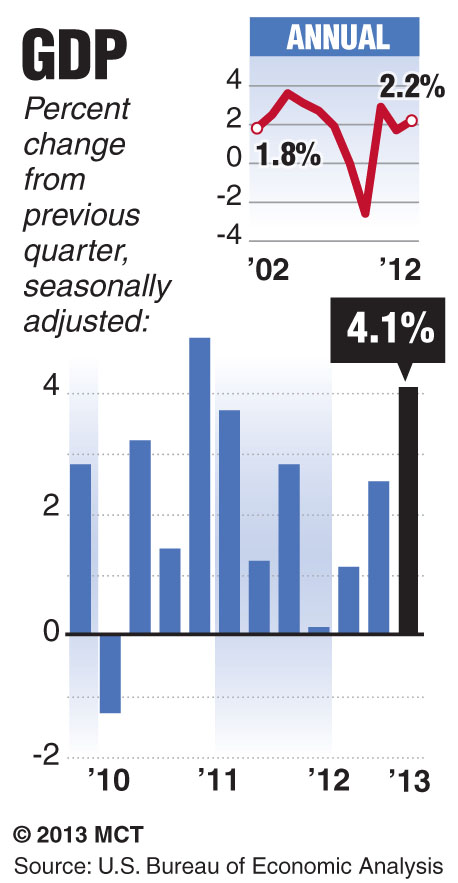 Adding to the rosier economic outlook for next year, revised government data show the economy grew in the third quarter at the fastest pace in nearly two years, as American consumers spent billions of dollars more than originally thought.

The Commerce Department said Friday that the nation’s gross domestic product, the broadest measure of economic activity, expanded 4.1 percent at an annual rate in the July-to-September period.

Officials had previously estimated that GDP grew 3.6 percent in the quarter and figured most of that came from an unusually large increase in the restocking of goods, something that typically can’t be maintained throughout the year.

But the new report found that consumer spending was stronger and had contributed significantly more than previously believed to the quarter’s jump in GDP from a rate of 2.5 percent in the second quarter.

That suggested there was stronger underlying momentum than previously thought, raising hopes that the economy will kick into higher gear next year and escape the sputtering recovery from the Great Recession.

“I firmly believe that 2014 can be a breakthrough year for America,” President Barack Obama said in a news conference Friday when he cited the latest GDP report, along with other positive data on jobs.

Personal spending accounts for more than two-thirds of GDP, but it has increased at a sluggish rate this year and generally throughout the four-year recovery.

Although the revised spending number is far from robust, more recent retail sales and other economic statistics suggest that personal consumption is picking up and will provide a bigger boost to economic growth next year.

“The consumer is back in the game,” Chris Rupkey, chief financial economist at the Bank of Tokyo-Mitsubishi in New York, wrote in a note to clients on Friday’s report.

The primary keys to consumer spending are job growth and income gains – and both have been looking better in recent months. The improved job market was a main factor in the Federal Reserve’s decision this week to start pulling back on its huge bond-buying stimulus program.

Analysts also see stronger spending ahead, because many consumers have refrained from replacing home furnishings and other items. Commerce Department figures indicate that the average age of consumer durable goods such as cars, appliances and jewelry is at a 50-year high of 4.6 years.

“But sentiment has improved with the budget deal and apparent reduction in brinkmanship in Washington,” he said, referring to the two-year budget agreement approved by Congress.

Stronger consumer activity will be needed, especially if capital spending by companies grows moderately, as it has this year. Corporate profits rose 1.9 percent in the third quarter, down from 3.3 percent in the second quarter, according to Friday’s report.

For the last three months this year, GDP growth is looking weaker, largely because of an expected drag in inventories as companies run down their stockpiles. But analysts have steadily raised their GDP-growth estimates for the near term.

On Thursday, Macroeconomic Advisers estimated that GDP would advance at a 2.2 percent annual pace in the fourth quarter, up from its projection of 1.7 percent just a week earlier.

And most Federal Reserve policymakers, in a forecast this week, projected GDP growth of 2.8 percent to 3.2 percent next year, up from 2.2 percent to 2.3 percent expected for this year.

One of the biggest risks to the outlook, analysts said, is an expected rise in interest rates and what that might mean for the recovering housing market as the Fed gradually pulls back from its unprecedented stimulus.

“There’s still a lot of room for growth,” he said at a briefing this week with reporters at Third Way, a Democratic think tank.

Furman said the “single, most imminent policy challenge” to the economy was the expiration of unemployment benefits for 1.3 million workers by the end of month, with many more people set to see an end to unemployment-insurance checks throughout next year.

Analysts agreed that unless Congress extends the benefits, the cutoff will reduce purchasing power and put hardships on the households losing benefits.

The hit to the overall economy, though, is expected to be relatively small – slicing GDP growth by about 0.15 percentage points next year, according to Moody’s Analytics.