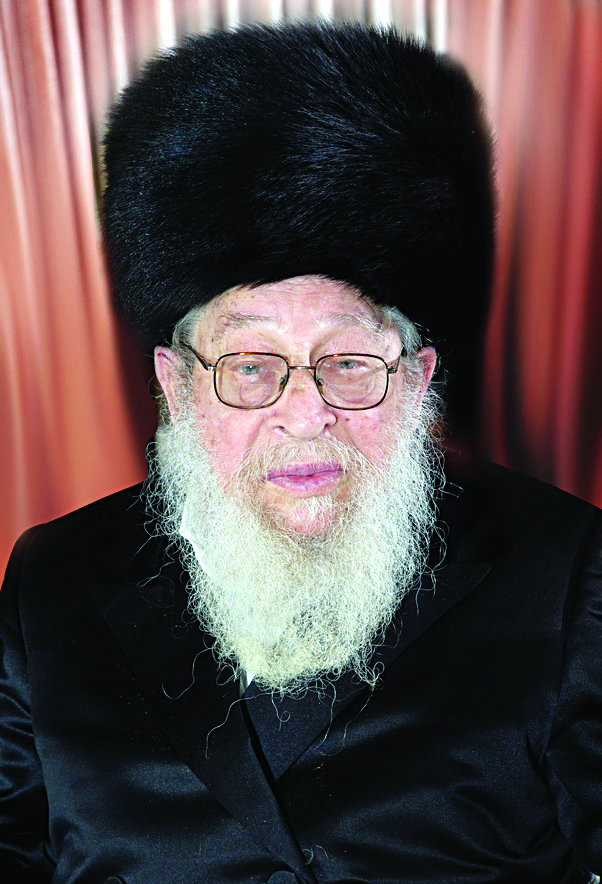 The Sokolover-Kotzk Rebbe, Harav Mendel Meir Morgenstern, zt”l, passed away in Bnei Brak on Sunday at the age of 92. A large crowd, headed by Gedolei Torah, accompanied him on his final journey to the Chelkas Hachassidim in the Kiryat Shaul Cemetery in Tel Aviv. The Rebbe was a holdover from a previous generation, descended from a prestigious lineage, and a renowned ohev Yisrael who warmly greeted and helped any person he encountered. Many also benefitted from his wise counsel.

Reb Menachem Mendel’s early chinuch was from his father. In 5698/1938, when his father passed away during the lifetime of his grandfather, the Sokolov-Kotzk Rebbe, he continued to grow in the home of his holy grandfather, learning Torah, yiras Shamayim and Chassidus from him.

These years remained ingrained in his memory, and in later years, he would share stories and wonders that he had witnessed in his grandfather’s holy court. He also had many stories of Polish Rebbes before the war, whom he visited often.

Harav Meir Mordechai began learning in Yeshivas Chachmei Lublin, where he was very respected by his rebbi, Harav Tzvi Aryeh of Kozhiglov, Hy”d, and the other Rabbanim in the yeshivah. He made great strides in his learning and Chassidus while there.

He was greatly beloved by his grandfather, the Sokolov-Kotzk Rebbe, zt”l, as indicated by the following story. Three days before the outbreak of World War II, which broke out on 18 Elul 5699/1939, the Rebbe was with his grandfather, Harav Yitzchak Zelig, zt”l, in the resort city of Otvotzk. Grandfather and grandson went out to the balcony of the house, and the elderly Rebbe began to speak about the impending war, and remarked to his grandson: “What will be with the manuscripts I have written throughout my life, and to which I devoted every spare moment? Will they all be lost?” Indeed, tragically, all the manuscripts were hidden during the war years in the homes of two chassidim, but were destroyed.

However, although his grandfather did not merit to see his writings printed, not all was lost. His grandson, the Sokolov-Kotzk Rebbe, took this as a living will and compiled whatever he remembered, along with divrei Torah that elder chassidim remembered, and the few chiddushim that survived, and published the sefer Sheeris Yitzchak, with great effort. Likewise, he researched the history of his great-grandfather, Harav Chaim Yisrael of Pilov, zt”l, and from the remnants of his chiddushei Torah that survived, he published the sefer Sheeris Yisrael.

When the war broke out, Harav Meir Mordechai fled to Lublin with other talmidim from the yeshivah. He endured many travails, wandering from country to country for years. He traveled through Poland, to Lithuania and from there to Japan, Vilna, and Shanghai. En route, he passed through India and even Egypt. In 5702/1942, while the war was still raging, he merited, b’chasdei Shamayim, to reach Eretz Yisrael; he was the lone survivor of his family, aside for one sister, who resided in America.

Upon his arrival in Eretz Yisrael, he married his Rebbetzin, tbl”c, the daughter of Harav Moshe Ludmir, z”l, one of the eminent chassidim of the Boyaner Rebbes. Together, they built a home on the foundations of Torah and established doros that follow in the path they set.

The Rebbe was an extremely wise man, and his wisdom became renowned. He was also a very warm, friendly person, and his refined middos were remarkable. He would go to great lengths to help another person, and knew when someone needed a good word, encouragement or financial assistance. There are countless stories of how he supported others, both emotionally and financially, without anyone knowing about it.

Over the past year, he fell ill and endured a lot of suffering, as he was repeatedly hospitalized. Despite his suffering and weakness, he continued in his avodas Hashem. His family cared for him in an outstanding fashion, especially his Rebbetzin, who did everything possible to ease his pain. On Sunday, he passed away in the hospital, surrounded by his sons, sons-in-law and grandsons.

His levayah departed from his beis medrash in Bnei Brak to the Kiryat Shaul Cemetery in Tel Aviv.

He is survived by his Rebbetzin; his sons, Harav Dovid and Harav Yitzchak Zelig; and his daughters: Mrs. Chaya Granatstein; Mrs. Sarah Alter; Mrs. Shoshana Korn; Mrs. Faigy Scheiner and Mrs. Esther Silberberg, grandchildren and great-grandchildren, who follow in his path.