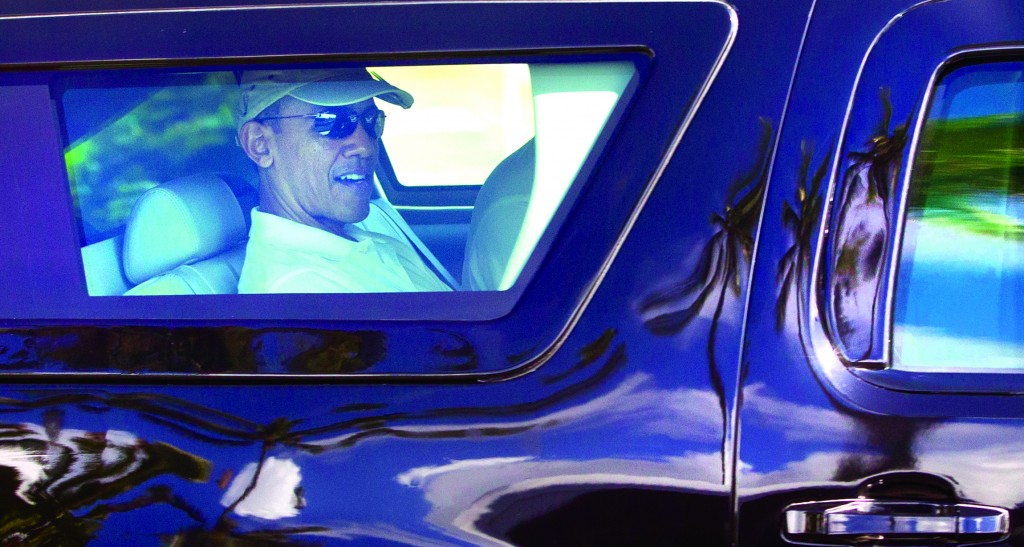 An ocean away from Washington worries, President Barack Obama opened his annual Hawaii vacation Saturday on a quiet note — and hoped it would stay that way for the next two weeks.

Every year, Obama and his family prepare to return to his birth state here on the sun-scorched shores of Oahu. And every year — until now — congressional squabbling has forced the Obamas to delay their trip.

This year, Obama was cleared for an on-time departure by Congress, which defied pessimistic expectations last week by passing a bipartisan budget deal, all but ensuring the government won’t shut down over the next two years. It was a far cry from presaging a new era of cooperation, to be sure, but a silver lining for Obama a day earlier as he acknowledged a year of frustrating “ups and downs” in an end-of-year news conference.

The president, first lady Michelle Obama and daughters Sasha and Malia, hopped an overnight flight Friday aboard Air Force One to Honolulu, where they were whisked by motorcade to a beachside home in Kailua, a sleepy suburb with a five-mile stretch of beach popular among windsurfers and tourists.

The next morning, Obama, typically an early riser, got a late start, staying at the home until early afternoon, when he headed to the golf course at a nearby Marine Corps base.

The president has no public events scheduled during his vacation, which is expected to last through Jan. 5. In previous years, frequent golf outings have accompanied trips to local restaurants and other island outings.

A few weeks of low-key rest and relaxation would be a welcome change of pace for Obama, who reflected on a high-stakes year of brinkmanship and health care woes as he packed his bags for Hawaii.

Last year, Obama had to temporarily abandon his vacation to fly home for a congressional standoff over the so-called fiscal cliff. The year before, a showdown over payroll tax cuts forced him to delay the start of his Hawaii hiatus.

Throughout his vacation Obama will continue to get regular briefings from advisers traveling with him, White House officials said.