General Stocks Pause on Wall Street a Day After a Surge 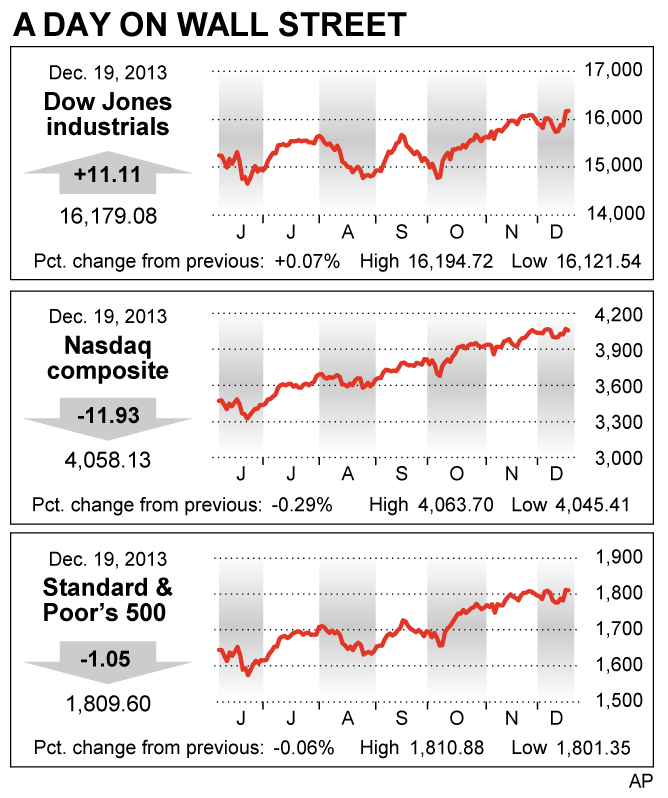 U.S. stock indexes ended up pretty much where they started on Thursday, a day after a powerful surge.

Stocks gained the most in more than two months Wednesday after the Federal Reserve said it would reduce its bond-buying program to $75 billion a month from $85 billion. Investors saw the decision as a vote of confidence in the economy.

“It’s good for the economy, and it’s good for the market, to start standing on its own two feet,” said Natalie Trunow, chief investment officer for stocks at Calvert Investments.

Financial markets were still digesting the Fed’s move on Thursday. While stocks were holding close to record levels, Treasury yields climbed, the dollar rose and gold slumped to its lowest in more than three years.

Target fell $1.40, or 2.2 percent, to $62.15 after the company said that about 40 million credit and debit card accounts may have been compromised by a data breach that happened just as shoppers flooded into stores for Black Friday, the day after Thanksgiving.

The S&P 500 is up 0.2 percent for the month after moving into the green for the first time in December on Wednesday. If the gains hold, the index will have advanced for 10 of the 12 months this year.

Stock have surged this year as the Fed has kept up its economic stimulus and held down long-term interest rates. Stock prices have also been supported by growing corporate earnings and a gradually strengthening economy.

Investors were happy to get more reassurance Wednesday from the Fed that interest rates would stay low after the bond-buying stimulus was removed, said Eric Weigand, a senior portfolio manager at U.S. Bank.

The moderate pace of the reduction in the Fed’s bond purchases was also encouraging. “It was not too hot and not too cold,” Weigand said.

In government bond trading, the yield on the 10-year Treasury note rose to 2.93 percent from 2.89 percent late Wednesday. The yield climbs when bond prices fall. Demand for bonds was lower Thursday as traders anticipated less buying from the Fed.

The rise in yields also hit the stocks of power companies.

Utilities companies fell the most of the 10 industry sectors that make up the S&P 500. Investors buy utility stocks because they pay big dividends. As bond yields rise, those stocks become less attractive.

Investors are dumping their holdings of gold because interest rates are rising and the dollar is gaining after the Fed said it would pare back its bond purchases. Traders are selling gold because they see less risk of inflation from the Fed’s stimulus program.