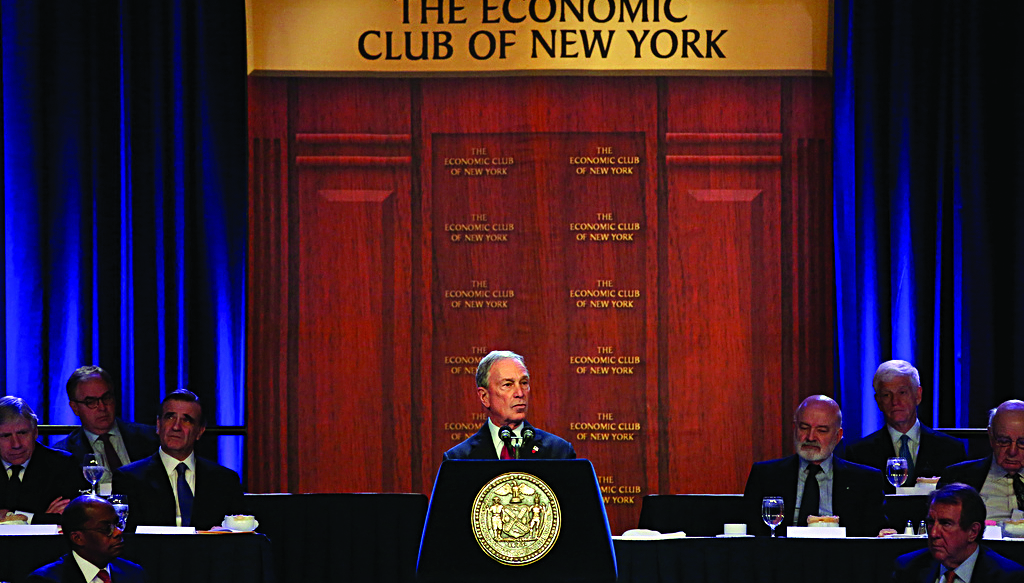 Issuing a stern warning to his successor that the city’s financial health cannot be taken advantage of, Mayor Michael Bloomberg said in a legacy speech Wednesday that the nation’s biggest city faces a serious threat: their workforces’ pension and health care costs and the politics around them.

“It’s clear that the golden age of the suburb is over, and it’s being replaced by a new urban renaissance” in which cities are magnets for people and pioneers in policy, Bloomberg told The Economic Club of New York during what is planned as the last major speech of his 12-year tenure.

But “we cannot blind ourselves to the obstacles that stand in the way … a growing fiscal crisis that, if nothing is done, will extract a terrible toll,” he said.

Bloomberg has said previously that rising pension and health care costs imperil progress in New York and other cities. But he painted the issue Wednesday in dramatic terms, lashing out at what he called a “fiscal straitjacket” for cities and a “labor-electoral complex that has traditionally stymied reform” — a phrase that evoked the “military-industrial complex” about which President Dwight Eisenhower famously warned the nation in a speech days before he left office in 1961.

Bloomberg said local governments end up becoming “prisoners to the labor contracts of yesteryear” when labor leaders’ drive to protect their members’ interests runs into officials with re-election on their minds.

“Let’s face it: The future that most elected officials worry most about is their own,” he said.

Bloomberg has been locked in an increasingly bitter clash with unions in recent years. Contracts with virtually all unionized city workers have lapsed as he pressed for employees to forgo back raises and pay more for health insurance.

But history appears to favor his version of events. Especially since Detroit’s recent bankruptcy, mayors in many cities around the country have begun pushing to change the pensions that have long been seen as a prized — sometimes the primary — benefit of government jobs. Some have proposed replacing or reducing traditional pensions in favor of what are called defined-contribution plans, like a 401(k), at least for new employees.

Bloomberg suggests workers should have a choice between the two types of plans.

In New York, the annual pension cost has risen from about $1.5 billion a year to $8.2 billion a year in 12 years, draining money that could otherwise have gone to affordable housing, tax cuts, schools or a host of other purposes, Bloomberg said. And health insurance costs have doubled since 2002, to $6.3 billion this year, he said this summer.

On Thursday, the nonpartisan New York City Independent Budget Office predicted that the city will have a $2.4 billion budget surplus at the conclusion of this fiscal year, some $581 million more than projected last month. The city’s budget is $72.5 billion.

The budget office warns that NewYork is facing fiscal challenges that “could quickly erode” its economic health. Chief among them are the expired labor contracts.

Mayor-elect Bill de Blasio stressed Wednesday that addressing the expired contracts would be “job one” but didn’t specify what he aimed to do about it.

“As much as I appreciate Mayor Bloomberg’s advice,” de Blasio said, “I would caution that one should be careful giving advice from that perspective.”