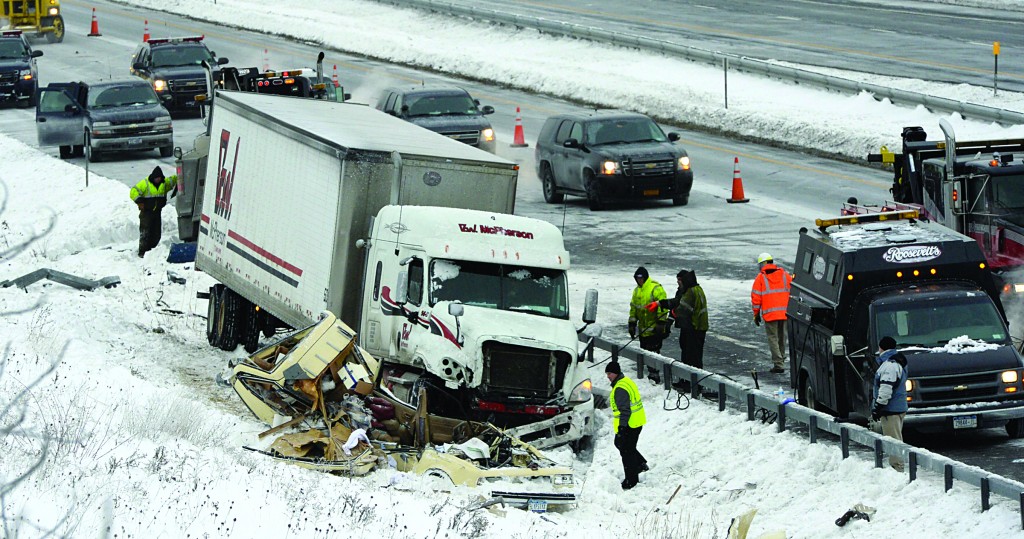 A New York state trooper died Tuesday from injuries he suffered when his police cruiser was rear-ended by a tractor-trailer shortly after he pulled over a car for speeding on the Thruway, authorities said.

Trooper David Cunniff, 35, was inside his patrol car behind the car he had pulled over on Interstate 90’s eastbound lanes around 8:20 p.m. Monday, when his cruiser was hit by the big rig and he was partially thrown from his vehicle. The truck also hit the car, injuring the driver.

The trooper suffered massive head trauma and was airlifted to Albany Medical Center, where he died Tuesday afternoon. The announcement of the trooper’s death came in a news release soon after State police Superintendent Joseph D’Amico had finished giving details of the crash during a news conference held at the State Police Academy in Albany.

D’Amico said neither alcohol nor weather was considered a factor in the crash, and police were still investigating.

He said the trooper’s vehicle and the car Cunniff stopped were near Exit 27 in Amsterdam, about 30 miles northwest of Albany. He said the tractor-trailer was traveling east in the right lane and drove off the road for some unknown reason near where the trooper’s car was idling with its emergency lights on.

The truck slammed into the back of the trooper’s car, sending it 50 yards into an embankment, then rammed the other car, moving it 75 yards and landing on top of it.

Police said the driver of the car, 57-year-old Eric Heller of Stone Creek in Warren County, was in fair condition at the Albany hospital. The truck driver, Gary Blakley, 65, of Ridgeway, Ontario, wasn’t injured. His truck was hauling insulation, police said.

Cunniff, of Duanesburg, was a nine-year state police veteran who had been working with Thruway patrol since 2009. He is survived by his wife and two young sons.