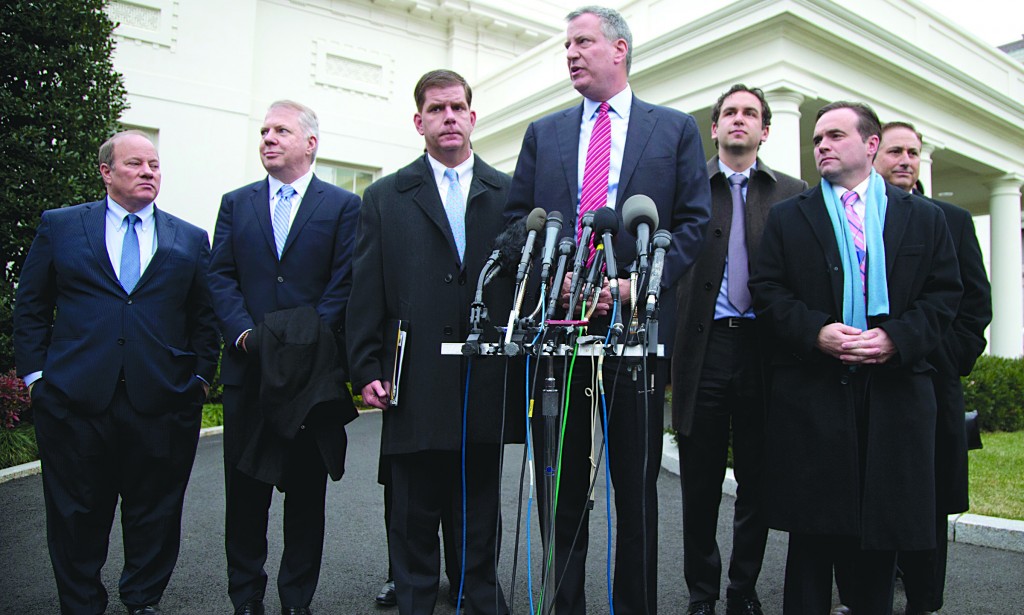 Even before he’s sworn in as New York’s 109th mayor on Jan. 1, Bill de Blasio is planning to take his campaign for tax hikes, social programs, urban-friendly transit and affordable housing to an audience across the country.

De Blasio, a 52-year-old Democrat, says he wants to be a “national convener” for a “progressive urban agenda” that got him elected by 49 percentage points, the largest margin for a non-incumbent in city history.

“I’m going to begin a mission that I look forward to working with my fellow mayors on, certainly work with the president on, to slowly but surely turn the congressional focus in particular back to investments in education, infrastructure, mass transit, housing, the kinds of things that would change New York City so fundamentally,” de Blasio said last week at a news briefing.

Residents of New York, the biggest U.S. city, have come to expect their mayor to play a major role on the national stage, said Howard Wolfson, who oversaw Mayor Michael Bloomberg’s advocacy efforts as deputy mayor for governmental affairs.

“The mayor-elect has a real opportunity to take a national role on issues he cares about,” said Wolfson, who worked with de Blasio on Hillary Clinton’s 2000 Senate run from New York. “Being mayor of New York gives you a big platform, a big canvas. People listen to you more.”

De Blasio is taking control of a metropolis where 46 percent of four-person households earned $46,000 — or 150 percent of the city poverty level — or less in 2011, while the richest 5 percent account for 64 percent of income-tax revenue.

To assume national leadership, de Blasio must make good on his promise to reduce such disparity of wealth, several of his supporters said in interviews. His signature proposal, taxing the wealthiest New Yorkers to pay for universal pre-kindergarten and after-school programs, must win approval from a state legislature in an election year.

“He has to run the city right to be a national spokesman, and that means make the tough decisions, especially when a lot of people aren’t going to like some of them,” said former Vermont Gov. Howard Dean, a Democrat who was raised in New York. He said he supported de Blasio’s candidacy because “he has the capacity to inspire.”

The political risks for de Blasio surfaced at a Dec. 9 fundraiser held by The Nation Institute, a self-described bellwether of progressive politics. The mayor-elect received a standing ovation from about 450 attendees who paid as much as $500 a plate.

But outside the event, protesters showed up to complain that de Blasio wasn’t progressive enough. Demonstrators also attacked his choice of Bill Bratton as police commissioner. They said Bratton instituted the same stop-question-and-frisk practice in New York and Los Angeles that de Blasio campaigned against.

“There will be compromises and give-and-take, and we’ll see how deft he is,” said Katrina vanden Heuvel, editor of The Nation. “I think he’ll be pragmatic enough to focus on New York City and make that the laboratory for change that he can then point to for the rest of the country.”

De Blasio is filling out his team of deputies and agency heads charged with maintaining the city’s essential services, whether it’s continuing a 20-year drop in crime; collecting 10,500 tons of trash daily; or operating its parks and cultural institutions to ensure the economic growth that comes from attracting record numbers of residents, businesses and tourists.

One of his first tasks will be to sift through the city’s $70 billion budget and find a way to pay raises to 300,000 city employees whose contracts have expired. Another early priority: persuading state lawmakers to approve a tax hike on incomes over $500,000 to pay for his education plan.

That task has gone to Emma Wolfe, 34, one of his most trusted political advisers, whom he appointed director of inter-government relations. Among her duties, she said, will be to translate de Blasio’s landslide victory into a movement “that fights for an urban agenda in Washington.”

De Blasio said throughout the campaign that Bloomberg hadn’t done enough to fight income inequality by supporting wage and benefit guarantees for workers in city-financed developments. Yet he cited his predecessor as his model for using the power of the mayoralty to bring issues to national attention.

“I really do honor what Mayor Bloomberg did on gun control, on climate change, on immigration in terms of being a national convener and organizer of those efforts,” de Blasio said. “We’ll continue a lot of that work.”

The emergence of a movement centered on income equality and focused on taxing the rich and exacting larger concessions from developers to build low-cost housing and other amenities for the poor makes some Democrats nervous, said Steven Rattner, a Democratic donor who calls himself a centrist. Rattner said he’s “scared” voters would start to think the party has become “too liberal, too far out in front.”

“Some of what they advocate is questionable as a political, and maybe as an economic, matter,” Rattner said. “I’m in favor of raising the minimum wage, but there is some level beyond which you can’t push it or it begins to cost jobs because employers don’t want to pay. In seeking more from the rich, you don’t want to kill the goose that lays the golden egg.”