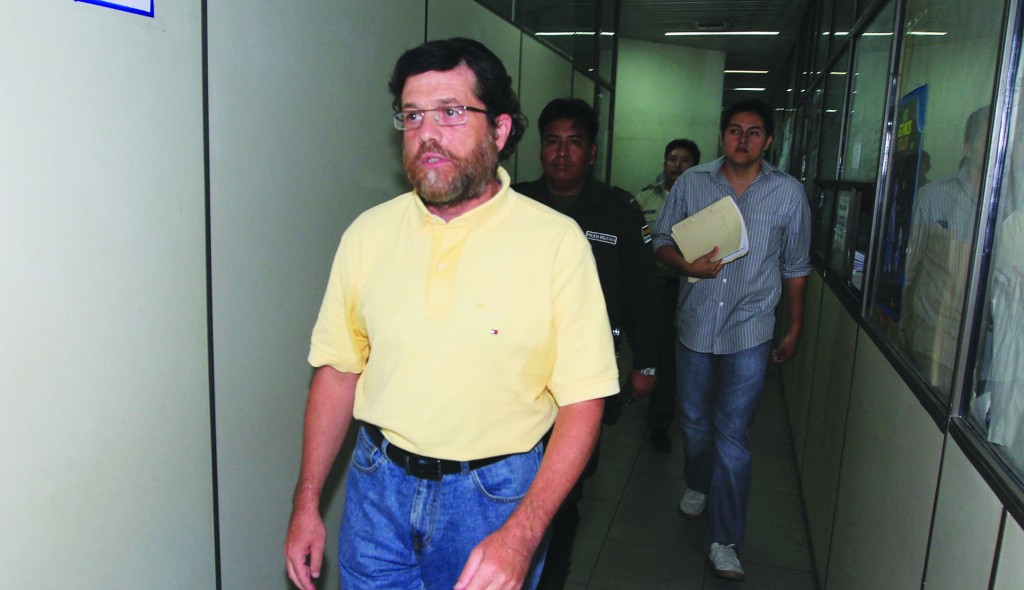 As he remains holed up in an undisclosed location, activists on behalf of Jacob Ostreicher are only willing to say two things: he is in the United States and he will tell on his own the story of how he left Bolivia and came to the U.S.

A day after Ostreicher, a 55-year-old Orthodox Jew, stunned people following his 3-year saga with reports that he escaped house arrest in Bolivia, Assemblyman Dov Hikind said that he should be home in Brooklyn “in a day or two.”

Hikind, a Brooklyn Democrat who was one of Ostreicher’s biggest advocates since the latter’s arrest in 2011, refused to address rumors that swirled these past few days as dribs of information emerged, with talk of abductions and ransoms. Hikind said that Ostreicher himself would talk to the press as soon as he is able to.

In a dramatic escape painstakingly planned for months, Ostreicher fled Bolivia over the weekend through Peru, a more Western nation which neighbors the Andean country. He was then flown to Los Angeles before going to an undisclosed location to rest up and recover from his ordeal.

Ostreicher was arrested in 2011 on suspicion of money laundering by Bolivian police — one of the hemisphere’s poorest nations, where corruption is endemic and an indigenous president is seeking to nationalize foreign-owned companies — while trying to salvage a rice-growing venture. But he was then jailed for 18 months without being charged, until a chorus of international activists, led by actor Sean Penn, intervened and won him house arrest.

After his arrest, thousands of tons of his rice were confiscated and sold. He was barred from leaving the country until the case draws to a close. Even as virtually every official related to his prosecution — including prosecutors, government officials and judges, 15 in all — were arrested for corruption related to the case, he was still denied release or a fair hearing.

Over the past few months, a plan for his escape was drawn up by those lobbying for his release, including Hikind, Penn and Rep. Chris Smith, a New Jersey Republican whose constituents include Ostreicher’s daughter. A source close to the family said that this was an “organized effort” to get Ostreicher out of the country “by professionals.”

The plan involved a purported “abduction,” after which Ostreicher would be spirited out of the country. The State Department was reportedly informed of the plan, although they refused to comment on it Tuesday.

While the scheme was hatched months ago, it was shelved until the time deemed appropriate.

That time came late last week, as Ostreicher’s family convinced him to give his OK to it. Aside for his wife Miriam, none of his family members were aware of what was going on. As of late Tuesday afternoon, he had not even communicated with his daughter, Chaya Weinberger of Lakewood, the family’s main spokesperson.

The plan worked flawlessly. Ostreicher was “kidnapped,” driven to Peru and then flown out of the country before Bolivian immigration authorities even realized that he was missing.

Hours after the State Department confirmed the Brooklyn businessman was back in the U.S., Jorge Perez, Bolivia’s deputy interior minister, told a press conference Monday that it would have been difficult for him to get out, given the media attention to his case. Col. Edmundo Rivero, head of police in the city of Santa Cruz, where Ostreicher was under house arrest, said he was still checking with immigration authorities on the possibility the American left.

But by Tuesday, furious Bolivian officials who found out of his escape from Peruvian authorities threatened to contact Interpol to arrange Ostreicher’s extradition.

“He is a person who is being tried for common crimes, who has no immunity and obviously this will give our country greater standing to seek extradition,” Justice Minister Cecilia Ayllon said.

Ayllon said she didn’t know whether the U.S. government played a role in the escape, saying only that Ostreicher duped authorities at an unspecified border crossing Sunday night before boarding an LAN Chile plane in the Peruvian capital of Lima for a flight to Los Angeles.

“His escape demonstrates that he was involved in the crimes he’s accused of,” Ayllon said.

Penn, through his publicist, said Tuesday that he’s with Ostreicher, who he said is safe, doing well and receiving medical attention. He said that the “humanitarian operation” had been mounted to extract Ostreicher “from the corrupt prosecution and imprisonment he was suffering in Bolivia.”

Ostreicher’s supporters scoffed at the notion of extraditing him back to Bolivia.

“It’s like the biggest joke in the world; Bolivia doesn’t know what the word justice means,” Hikind said. “They didn’t even have a dream of letting him go. All he wanted was justice. They say they want justice? That is what Yanky was asking for the whole time.”

Bolivia has an extradition treaty with the U.S., but relations between the two countries have been strained since President Evo Morales expelled the U.S. ambassador in 2008.

Ostreicher’s bizarre departure was just the latest twist in a saga that began Monday when the businessman’s family contacted the media saying they hadn’t heard from him in a few days and feared he had been kidnapped.

Ostreicher’s former secretary, Alicia Gutierrez, told The Associated Press that she received a phone call from his presumed captors demanding family members travel to Bolivia in the next 48 hours. A maid, Victoria Rocha, said it looked as if he hadn’t been home in the city of Santa Cruz since traveling to La Paz on Friday to supposedly pick up some kosher food sent by his family.

Meanwhile, congratulatory statements poured in from elected officials in the U.S.

“The detention of Jacob Ostreicher by the Bolivian government was wrong and unjust,” said New York City Mayor-elect Bill de Blasio, who as public advocate once suggested a sit-in protest outside the Bolivian consulate in Manhattan to protest Ostreicher’s continued detention. “I am glad he is back in the United States and safe, and I wish him a full and speedy recovery.”

“I am thrilled by the reports that Jacob Ostreicher, my constituent, who has been illegally detained in a Bolivian prison for two years, is finally free,” Rep. Jerrold Nadler (D-N.Y.) said in a statement. “…Mr. Ostreicher was the victim of a horrible miscarriage of justice and endemic corruption within the Bolivian justice system.”

“It was clear all along that the case against him was fabricated,” Councilman David Greenfield said. “…It took a long time, but we can finally rejoice as a community in knowing that Jacob Ostreicher is safe and sound tonight in the United States of America.”

“Jacob’s captivity was a fundamental injustice, an aberration of law and a violation of basic human rights,” Rep. Nydia M. Velázquez (D-N.Y.) said. “It is truly welcome news to hear he is home. I hope Jacob and his family can now find peace, move beyond this ordeal and rebuild their lives.”