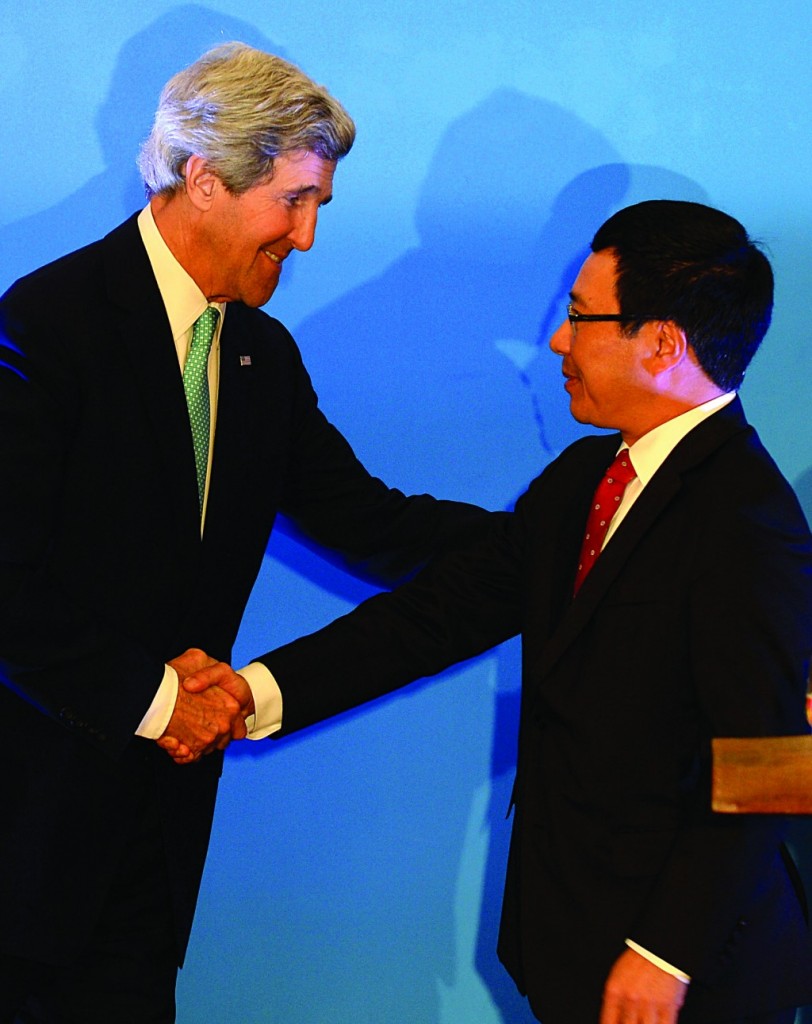 Secretary of State John Kerry offered harsh words for China and new maritime security assistance for Southeast Asia on Monday to bolster countries facing growing Chinese assertiveness in a region where the two world powers are jockeying for influence.

Tensions are running high after a near-collision of U.S. and Chinese naval vessels this month and an air defense zone China has declared over an area that includes territory controlled by Japan, a U.S. ally. Those actions have raised fresh alarm as Beijing modernizes its military and claims a wide swath of ocean and disputed islands across the East and South China Seas.

Kerry used his first visit to Vietnam as America’s top diplomat to reiterate support for diplomacy between Southeast Asia’s regional bloc and Beijing over the territorial disputes, and to provide aid for Southeast Asian nations to defend waters they claim as their own.

Kerry pledged $32.5 million, including up to $18 million for Vietnam that will include five fast patrol boats for its Coast Guard. With the new contribution, U.S. maritime security assistance to the region will exceed $156 million over the next two years, he said.

“Peace and stability in the South China Sea is a top priority for us and for countries in the region,” Kerry told reporters at a news conference with Vietnamese Foreign Minister Pham Binh Minh. “We are very concerned by and strongly opposed to coercive and aggressive tactics to advance territorial claims.”

The next stop on his Asian trip will be the Philippines, which lost control of a disputed reef in the South China Sea last year after a standoff with China. The U.S. is also helping equip the Philippines with ships and radar, and is in negotiations with Manila to increase the American military presence there.

Kerry said the new assistance was not a “quickly conceived reaction to any events in the region” but rather a “gradual and deliberate expansion” of U.S. support as part of the Obama administration’s broader decision to refocus attention on the Asia-Pacific.

But the step is almost certain to anger Beijing, which bristles at what it sees as U.S. interference in areas it views as China’s “core interest.” Beijing looks askance on Washington’s push to increase the U.S. military presence and strengthen its alliances in Asia as it ends a decade of war in Iraq and Afghanistan, calling it an attempt to contain China.

In a reminder of the high stakes in play, American and Chinese naval vessels came close to colliding in the South China Sea on Dec. 5, the most serious incident between the two navies since 2009.

The U.S. Pacific Fleet said Saturday that USS Cowpens was operating in international waters and had to maneuver to avoid hitting China’s lone aircraft carrier. The Liaoning, a symbol of China’s ambition to develop a navy that operates further from its own shores, only entered service last year and was on its first-ever sea trials in the South China Sea.

Beijing has not formally commented on the incident, but the state-run Global Times newspaper reported on Monday that the U.S. ship had first harassed the Liaoning and its group of support ships, getting too close to a Chinese naval drill and entering within 30 miles of the Chinese fleet’s “inner defense layer.”