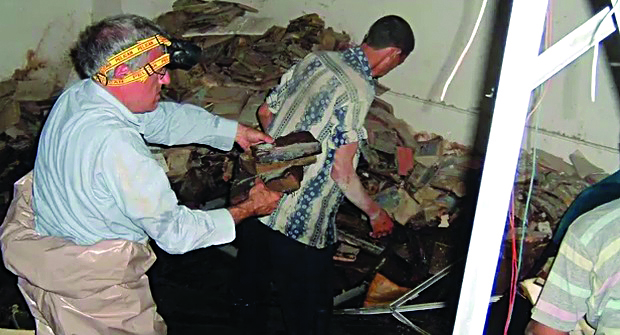 Sefer Torah fragments found amid a trove of more than 2,700 ancient sefarim and documents in the flooded Iraqi intelligence building basement in 2003 were buried in a suburban New York cemetery.

The buried parchments, which mainly consist of fragments of Chumash and Megillas Esther, are part of a collection discovered in May 2003 in the basement of Baghdad’s Mukhabarat, or secret police, headquarters as U.S. troops searched for weapons of mass destruction.

“This project is somewhat reflective of the new Iraq,” said Lukman Faily, the Iraqi ambassador to the U.S. “We are saying we would like to share and preserve the history and the heritage of the Jews, of the Christians, of the Muslims.”

According to halachah, damaged sifrei Torah that are unfit for use must be buried. Mold had inflicted much of the damage in this case, according to Maurice Shohet, president of the World Organization of Jews from Iraq, as the water system in the basement of the Baghdad building had been damaged by an unexploded bomb.

Faily spoke at a service Sunday at New Montefiore Cemetery in West Babylon, Long Island. Shohet said about 120 people attended the service, which was closed to the press.

An exhibit featuring a sample of the treasure shipped to the United States after it was found was displayed for the first time this fall at the National Archives in Washington, offering a rare glimpse into a Jewish population that dates to antiquity but dispersed after Israel was created in 1948.

“This is a statement by the government and people of Iraq that we are here to respect the heritage of the Jews,” Faily said.

The artifacts are expected to be returned to Iraq despite the objections of some in the Jewish community who have argued that they are part of their heritage and that there are few Jews remaining in Iraq to ensure the books are maintained.

On Monday, the Museum of Jewish Heritage — A Living Memorial to the Holocaust, in New York City, announced it would open an exhibit of some of the artifacts from Feb. 4 to May 18.