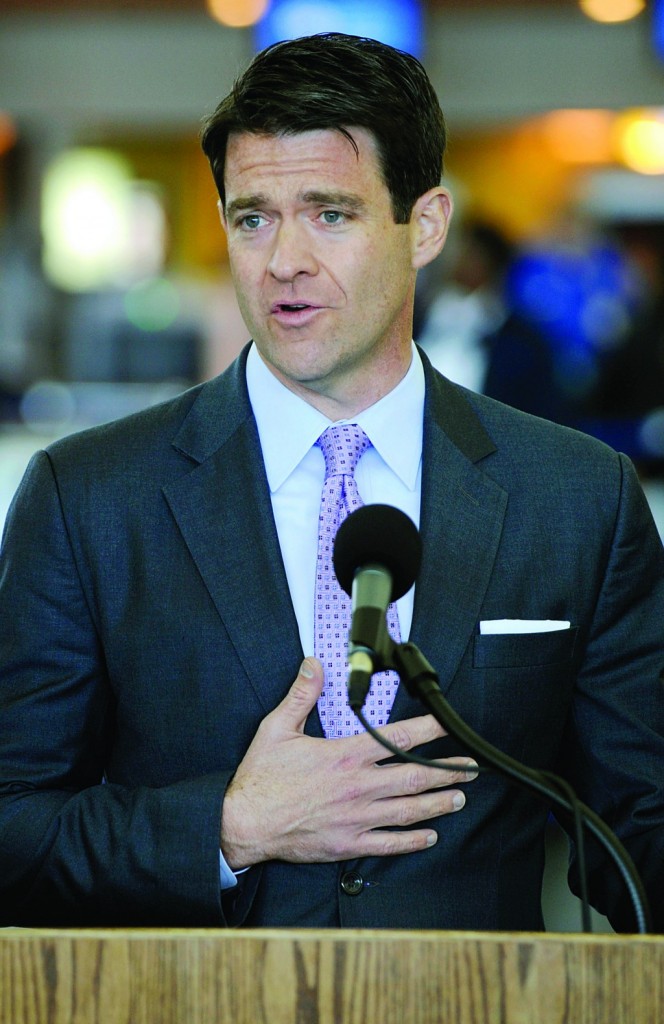 Gov. Chris Christie announced the resignation Friday of one of his top appointees amid an escalating probe into whether Christie loyalists deliberately created traffic jams at the George Washington Bridge in an act of political retribution.

The resignation of Port Authority deputy executive director Bill Baroni comes a day after a state lawmaker issued seven subpoenas to Baroni and other agency officials and the Democratic National Committee tried to link the controversy to Christie, a potential 2016 GOP presidential candidate.

Christie, who is shuffling some staff positions as he begins his second term, painted Baroni’s departure from a plum appointment as an expected move, though he also acknowledged the questions about a bridge delay cause a distraction.

“Sen. Baroni offered his resignation and I accepted it, but this wasn’t something I hadn’t planned already,” the governor said. Baroni has been Christie’s top deputy at the agency run by the governors of New York and New Jersey for four years.

The new deputy executive director, Deborah Gramiccioni, has a long history of working with Christie, both in the U.S. attorney’s office and in his administration.

The issue at play involves the George Washington Bridge, one of the world’s most heavily traveled spans. The town on the New Jersey side of the bridge is Fort Lee, whose Democratic mayor did not endorse Christie in his re-election campaign last month. While Christie is a Republican, his campaign focused heavily on bipartisan support to bolster his image as a pragmatic executive who will work with his political opponents when he needs to.

On Sept. 9, two of the three local-access lanes from Fort Lee to the bridge’s upper level were closed without warning, turning the town into a parking lot before they were canceled four days later. Port Authority officials said the closures were for a traffic study.

Christie said Friday that he believes that version of events, though he said Baroni and others did not communicate the plan properly. Christie also said he does not believe anyone on his own staff was involved in the lane closures and that he did not know about them until later.

Finishing a first term that, by New Jersey standards has been scandal-free, Christie previously spoke about the issue in public only once. That time, he laughed it off, joking that he personally put up traffic cones to close the lanes. “Just because [state Sens.] John Wisniewski and Loretta Weinberg are obsessed with this,” he said then, referring to two of his most prominent Democratic critics, “it just shows you they really have nothing to do.”

He denied on Friday a report in The Wall Street Journal that he called New York Gov. Andrew Cuomo, a Democrat, last week to complain that one of Cuomo’s appointees at the Port Authority was pushing too hard for answers about the bridge incident.

Port Authority Executive Director Patrick Foye, a Cuomo appointee, told lawmakers under oath that he was unaware of any traffic study.

David Wildstein, the Port Authority’s director of interstate capital projects and one of Christie’s high school friends, sent a resignation letter last week saying he would leave the agency as of Jan. 1. He said in the letter that he planned to leave anyway in 2014 but was speeding up his resignation because the bridge issue had become “a distraction.”

The resignations of Baroni and Wildstein are effective Friday.

Wisniewski said he welcomed Baroni’s resignation but said that won’t put the matter to rest.