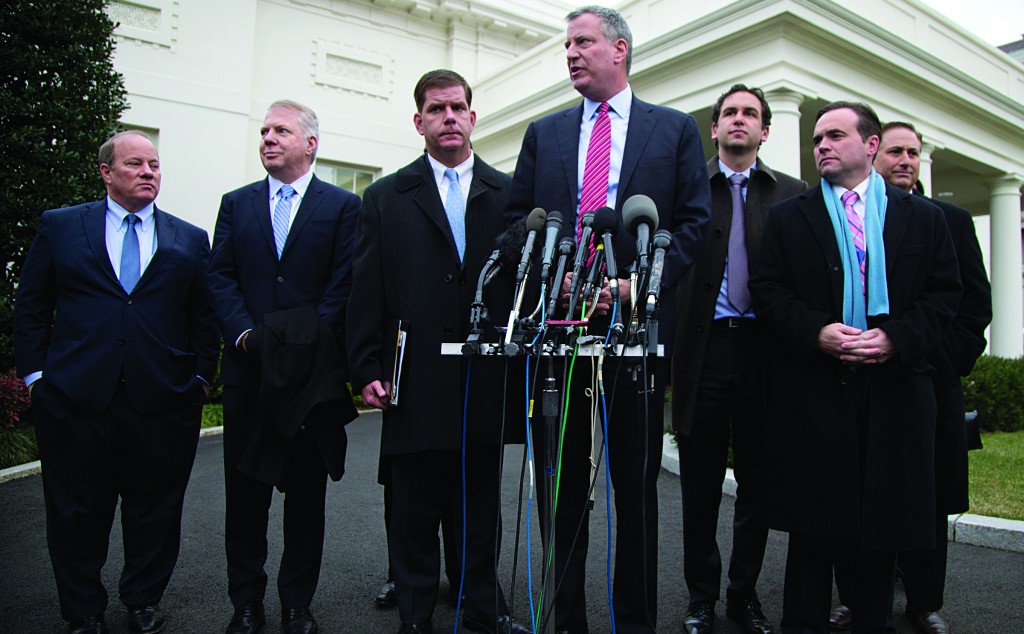 He was there with 15 other mayor elects, but New York City’s Bill de Blasio stood out at the meeting Friday with President Barack Obama, in height, attention and ideas.

The newly elected Democrat, standing at 6-foot-5, was the lead spokesman for the mayors who met with Obama and Vice President Joe Biden at the White House to discuss urban issues, such as income inequality, jobless benefits and access to early childhood education.

“I’ve always said that mayors don’t have time to be ideological, and they don’t really have time to be partisan,” Obama said, according to a video released by the White House. “Because they, every day, are held accountable for concretely delivering the services people count on.”

De Blasio told reporters it was clear the president was dedicated to helping working families. Asked whether he thought his highlighting of inequality during his mayoral race had sparked Obama’s renewed focus on the topic, de Blasio said, “He was already there, very squarely.”

Although Obama had called for several initiatives to close the income disparity earlier this year, it was only after the election of de Blasio that he specifically called for ideas to solve income inequality.

“So I think there was a really organic unity among all of us of the fact that this is the issue of our times,” he said. “Fighting inequality is the mission of our times.”

De Blasio was seated directly across from the president during the Roosevelt Room meeting. His frame towered over the others as he then led the group out of the West Wing for a press conference.

“I think it was, to begin with, inspiring to hear our president, his concern for what we’re facing,” de Blasio said. “…There was real passion in the president’s voice when he talked about how fundamental it is to move forward an early education agenda in this country and I think we all now know clearly that he will be a partner in all we need to do.”

De Blasio will probably have an easier time than other mayors-elect setting up his city as the progressive capital he called for during his campaign. A new poll on Friday shows that most New Yorkers are optimistic that he will make the city a better place.

But the New York Times/Siena College poll also showed a majority believing the city’s income inequality will remain about the same under de Blasio’s leadership. Also, 23 percent think public education should be his top priority. That was followed by keeping the city safe from crime and promoting economic development. Dealing with the rich/poor gap, de Blasio’s chief campaign issue, comes in at number four of importance in the public’s view.