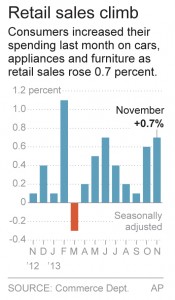 Americans ramped up spending at retail businesses in November, providing a boost to the economy.

But traditional retail stores didn’t benefit as much from the latest burst of spending. Consumers bought more cars, electronics, furniture and other big-ticket items. They also did more shopping online. Those trends reflect changes in consumers’ shopping habits and in the broader economy.

Total retail sales rose 0.7 percent in November, the Commerce Department said Thursday. It was the biggest gain in five months. And spending at retail businesses rose 0.6 percent in October, higher than previously estimated.

“Consumers who have money are spending and spending big,” said Diane Swonk, chief economist at Mesirow Financial. “Those who don’t aren’t.”

Sales of everyday items, such as clothes and groceries, fell last month. And sales at sporting goods outlets and department stores barely rose. That partly reflects steep discounting, as many shoppers still demand bargains before they buy.

But it also suggests Americans cut back on smaller purchases after splurging on cars and other large items. And it reflects shifts in where Americans do their year-end shopping.

“You can see why traditional retailers were squirming,” Swonk said.

Many large chains and industry groups have issued gloomy reports on the year-end shopping season. The National Retail Federation estimates that sales during the four-day Thanksgiving Day weekend dropped 2.9 percent, to $57.4 billion, compared with last year. That was the first decline in the seven years the group has tracked the data.

And other industry data have shown that, so far, fewer Americans have visited malls and brick and mortar stores, compared with last year.

But more people are shopping on their computers. Online and catalog sales rose 2.2 percent in November from the previous month — the biggest month-over-month gain since July 2012. In the past year, online sales jumped 9.4 percent. That’s double the 4.7 percent increase in total retail sales.

Michael Niemira, chief economist at the International Council of Shopping Centers, pointed to another factor that could illustrate the growing health of the consumer. Americans plan to purchase nearly $30 billion in gift cards this year, according to a survey by the retail federation, a record high. Yet purchases of gift cards don’t count as sales in either industry or government data. Those sales are tallied when the cards are redeemed.

Overall, Americans appear to be spending more, which could give a much-needed boost to the economy in the final three months of the year. Consumer spending rose only 1.4 percent in the July-September quarter, the weakest gain in nearly four years.

But economists are becoming more optimistic about the current quarter. Paul Dales, an economist at Capital Economics, expects consumer spending will rise at about a 3 percent annual pace, roughly double the third quarter’s rate. He forecasts that overall growth will be 2 percent at an annual rate.

That would be down from the third-quarter’s solid growth rate of 3.6 percent. But nearly half that growth came from inventory restocking, as companies added more goods to their warehouses and store shelves. More spending would ensure that businesses aren’t caught with unwanted supplies and keep the economy expanding.

Hiring has been solid since the summer, giving more Americans paychecks to spend. Employers added 203,000 jobs in October and the unemployment rate fell to a five-year low of 7 percent. Wages even picked up a bit and have risen 2 percent over the past year, outpacing inflation.