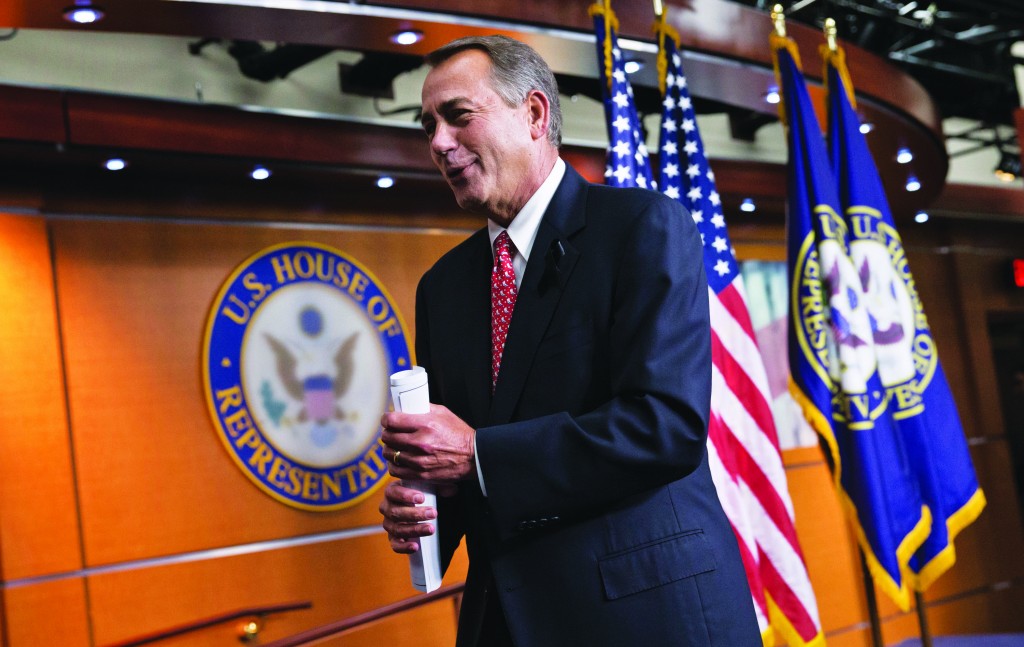 The legislation, backed by the White House, cleared on a vote of 332-94, with majorities of Republicans and Democrats alike voting in favor. Final passage is expected next week in the Senate.

The events in the House gave a light coating of bipartisan cooperation to the end of a bruising year of divided government — memorable for a partial government shutdown, flirtation with an unprecedented Treasury default and gridlock on immigration, gun control and other items on President Barack Obama’s second-term agenda.

Minutes after the budget action, the House approved a broad military policy bill. That vote was 350-69, sending the bill to the Senate, which plans to adjourn for the year next week.

In the end, the budget debate in the House was tame by comparison with Boehner’s criticism of Republican-favoring outside groups that at times have been more of an obstacle to him than Democrats.

Rep. Paul Ryan (R-Wis.), a chief GOP architect of the deal, made the conservatives’ case for support. The measure “reduces the deficit by $23 billion. It does not raise taxes and it cuts spending in a smarter way,” said the Budget Committee’s chairman, whose handiwork could be challenged in the 2016 Republican presidential primaries.

The second-ranking Democrat, Rep. Steny Hoyer of Maryland, joined other party leaders in swinging behind the measure, even though he noted that he represents 62,000 federal workers and said future government employees will pay higher pensions costs because of the bill. “This agreement is better than the alternative” of ever deeper across-the-board cuts, he said.

The agreement, negotiated by Ryan and Democratic Sen. Patty Murray of Washington, and endorsed by the White House, would set overall spending levels for the current budget year and the one that begins on Oct. 1, 2014. That straightforward action would probably eliminate the possibility of another government shutdown and reduce the opportunity for the periodic brinkmanship of the kind that has flourished in the current three-year era of divided government.

The measure would erase $63 billion in across-the-board cuts set for January and early 2015 on domestic and defense programs, leaving about $140 billion in reductions in place. It projects savings totaling $85 billion over the coming decade, enough to show a deficit reduction of about $23 billion over that period.

The cuts would be replaced with savings generated from dozens of sources. The combination of short-term spending increases and long-term savings would send deficits higher for the current budget year and each of the next two, a dramatic departure from the conservative orthodoxy that Republicans have enforced since taking control of the House three years ago.

That was a step too far for many Republicans, including some seeking election to the Senate next year.

Rep. Jack Kingston of Georgia, one of several Senate hopefuls from his state, said he would vote against the legislation. He said the existing across-the-board cuts “have a tendency to cut out muscle with fat, but it’s still the only tool in town for cutting spending.”

Rep. Tom Cotton, who is challenging Democratic Sen. Mark Pryor of Arkansas, announced his opposition, too, and said the legislation “busts the spending caps that took effect just months ago by spending billions now in exchange for supposed long-term spending cuts.”

Other Republicans said, despite shortcomings, the bill was the best the party could get in divided government.

“We have Republican and Democratic-controlled houses and as a result no one solution is possible,” said Rep. Darrell Issa of California. Echoing Boehner’s sentiments, he said of the outside groups, “What do they want, another government shutdown? If so, they ought to run for Congress.”

Democrats were conflicted, but for different reasons.

There was general support for easing across-the-board reductions in programs like education, Head Start and transportation — deficit reduction that Rep. Louise Slaughter of New York called a disaster. Yet Democrats were unhappy that the measure lacked an extension of unemployment benefits due to expire on Dec. 28.

The debate on the House floor was overshadowed by Boehner’s comments at his news conference.

“They pushed us into this fight to defund ‘Obamacare’ and to shut down the government. … That wasn’t exactly the strategy that I had in mind,” he said. “But if you recall, the day before the government reopened, one of the people that — one of these groups stood up and said, well, we never really thought it would work. Are you kidding me?”

Boehner’s remarks were part of a broader response by the Republican establishment as it struggles to counter the influence of organizations like Heritage Action, the Club For Growth, and the Senate Conservatives Fund.