Opposition leaders in Ukraine rejected President Viktor Yanukovych’s offer of talks Wednesday, saying they will not sit down with him until he fires his government and releases all arrested demonstrators.

That stance reflected their growing confidence after the abrupt withdrawal of riot police from parts of Ukraine’s capital early Wednesday raised protesters’ hopes that weeks of demonstrations have eroded police support for Yanukovych and his government.

Yanukovych issued an invitation late in the day to political, religious and civil figures to join a national dialogue. But it gave no details about a proposed date for the talks — and could have been merely an attempt to buy time and mollify Western officials.

The opposition reaction was scathing.

“Instead of a round table, what we got is a breakup (with) truncheons. The authorities are driving into a dead end,” opposition leader Oleksandr Turchynov said.

Yuri Lutsenko, a former Interior Minister who is now another opposition leader, said the police retreat shows that “basically only some units remain” loyal to Yanukovych. 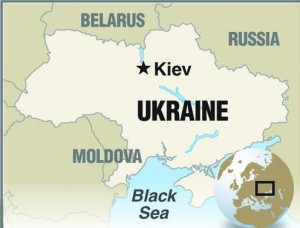 “This is a great victory,” Arseniy Yatsenyuk, leader of the largest opposition party in parliament, said of the police withdrawal. He spoke from the stage at Kiev’s central Independence Square, where protesters have set up an extensive protest tent camp manned around the clock.

Western diplomats have increased their pressure on Yanukovych to seek a solution to the tensions that have paralyzed this economically troubled nation of 46 million. In response, Prime Minister Mykola Azarov and other officials promised Wednesday that police would not act against peaceful protesters.

“I want to calm everyone down — there will be no dispersal” of protesters,” Interior Minister Vitaly Zakharchenko said in a statement, which did not explain why thousands of helmeted and shield-bearing police were deployed in the first place.

“I made it absolutely clear that what happened last night, what is happening in security terms here, is absolutely impermissible in a European state, a democratic state,” she said, referring to police scuffles with protesters.

In Washington, the State Department said it is evaluating all options, including possible U.S. sanctions against Ukraine. It didn’t provide details, but in the past the U.S. has imposed asset freezes and travel bans on senior officials in oppressive governments.

Yanukovych’s shelving in November of an agreement with the European Union to deepen economic and political ties has set off weeks of protests. Supporters of the EU pact — including many in Kiev, the capital — want Ukraine to become closer to Western Europe and distance itself from Russia, which ruled or dominated Ukraine for centuries.

Russia has worked hard to derail the accord, issuing a variety of trade threats, and Ukrainians in the east look more favorably on aligning more closely with Russia. Yanukovych, who is seeking a bailout loan from the International Monetary Fund to keep Ukraine from going bankrupt, is sensitive to the economic disruption that trade disputes with Russia can cause.

This article appeared in print on page 3 of the December 12th, 2013 edition of Hamodia.