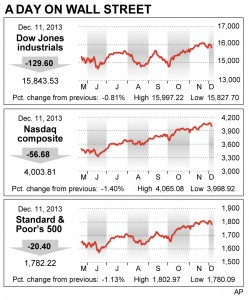 Disappointing earnings from a handful of U.S. companies pushed the stock market to its biggest loss in five weeks.

The broader stock market also fell. The Standard & Poor’s 500 index has fallen six out of eight days in December, leaving it down 1.3 percent for the month.

The market may be succumbing to “buyer’s fatigue” after a big rally this year, said Chris Bertelsen, chief investment officer at Global Financial Private Capital. The S&P 500 has surged 25 percent so far in 2013, putting it on track for its biggest annual increase in a decade.

“Anybody who thinks that it’s up forever is certainly a neophyte to this business,” said Bertelsen.

Another sign that investors’ optimism about stocks may be flagging was a sharp drop in the Russell 2000. The index of small-company stocks fell 1.6 percent Wednesday, the most in month. Still, this year’s 30-percent gain in the Russell 2000 has outpaced other big indexes.

Investors also considered the impact of the latest budget deal in Washington, which will help lawmakers avoid the immediate threat of another government shutdown. The 16-day shutdown in October crimped economic growth and hurt consumer confidence.

In the long run, the deal should be good for the stock market. It will allow investors to focus on the economy and the outlook for corporations rather than politics, said Peter Sidoti, a former Wall Street analyst who now runs a company that focuses on analyzing small-company stocks.

“It just gets rid of the noise,” said Sidoti, head of Sidoti & Co. “The less distractions that you have and the more that you have people focus on running their businesses, the better off we are.”

Some investors also attributed Wednesday’s slump to concern that the Federal Reserve could start reducing its support of the economy at a policy meeting next week. A pullback appeared more likely after strong economic reports, including a pickup in hiring last month.

The Fed has been buying $85 billion of bonds every month to hold down long-term interest rates. Ultimately, most investors see a potential reduction, or “tapering,” of that stimulus as a positive signal that shows the economy is strengthening.

In the short run, however, any decrease in the Fed’s huge bond purchases would likely create some anxiety in financial markets. The purchases have been driving bond prices higher and giving investors incentive to buy stocks by making them seem less expensive in comparison.

Wednesday’s drop “has probably more to do with anticipation of the Fed, than anything else,” said Omar Aguilar, chief investment officer for equities at Schwab. “People are making the assumption that the tapering will happen sometime between now and February.”

In government bond trading, the yield on the 10-year Treasury note rose to 2.85 percent from 2.80 percent on Tuesday.

After the market closed, S&P Dow Jones Indices announced that Facebook will replace Teradyne in the S&P 500 index. Facebook rose $1.82, or 4 percent, $51.20 in after-hours trading.

This article appeared in print on page 8 of the December 12th, 2013 edition of Hamodia.