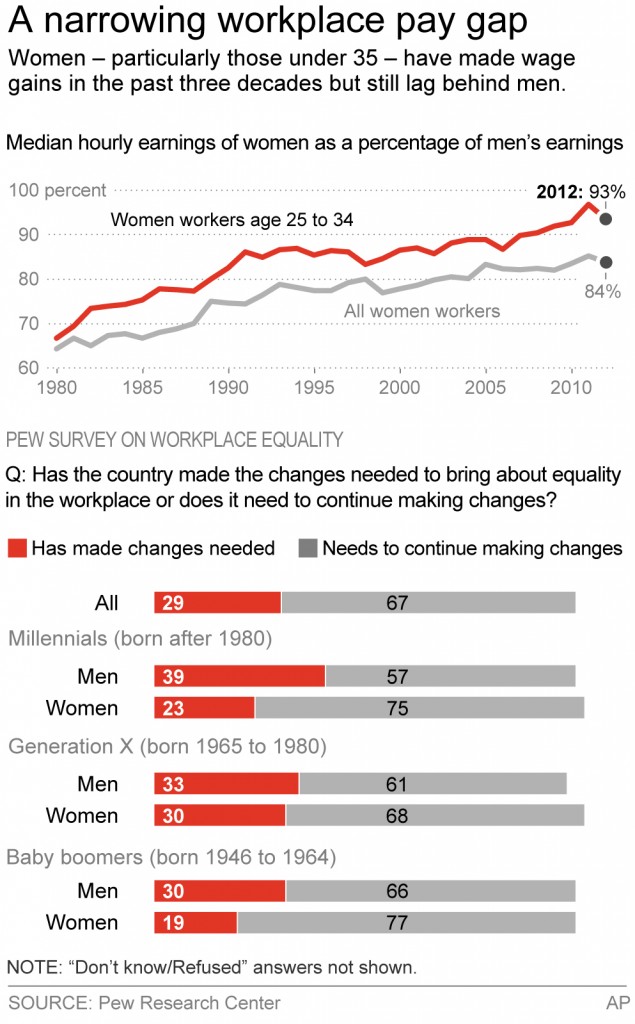 About 75 percent of young women believe the U.S. needs to do more to bring about equality in the workplace, a new study finds, despite a narrowing pay gap and steady employment gains for women at higher levels of business and government.

Those women remain as pessimistic as their mothers and grandmothers regarding gender equality in the workplace, according to the report released Wednesday by the Pew Research Center.

The study finds that women under 32 now make 93 percent of what young men earn, aided by women’s higher rates of college completion. But the analysis of census and labor data also shows the gender pay gap will widen for women by their mid-30s, if the experience of the past three decades is a guide.

That widening gap is due in part to the many women who take time off or reduce their hours to start families. Other factors cited in the report are gender stereotyping, discrimination, weaker professional networks and women’s hesitancy to aggressively push for raises and promotions, which together may account for 20 percent to 40 percent of the pay gap.

Even so, just 15 percent of young women say they have been discriminated against because of their gender.

“The report shows that we have made substantial progress on gender equality in the workplace,” said Andrew Cherlin, a sociology professor at Johns Hopkins University. “But our progress has shown us more clearly what still needs to be accomplished.”

“More doors are now open to women, but they can now see how far they are from equality in high-level jobs,” he said.

Kim Parker, associate director with the Pew Social & Demographic Trends Project, also attributed young women’s negative assessment of workplace equality in part to the slow movement of women into top job positions. “They feel empowered in many ways, yet when they look at the workplace, they see it as a ‘man’s world’ with the deck stacked against them,” she said.

Women are increasingly moving into higher positions, both in government and business. They make up nearly half the workforce, and the share of women in managerial and administrative occupations is nearly equal to that of men – 15 percent compared with 17 percent. Another milestone occurred Tuesday, when General Motors picked Mary Barra, a 33-year company veteran, as the first female head of a major U.S. car company. Still, women currently hold just 4.5 percent of Fortune 1000 CEO positions, the Pew report said.

The near-equal pay for young women is being driven in large part by their educational gains. Some 38 percent of women ages 25-32 now hold bachelor’s degrees, compared with 31 percent of young men. As a result, 49 percent of employed workers with at least a bachelor’s degree last year were women, up from 36 percent in 1980. That means more women in higher-skilled, higher-paying positions.

At the same time, the Pew study indicates that a woman’s job advancement often will hit a ceiling, due in part to competing demands of work and family. Women remain twice as likely as men to work part-time, and are more likely to take significant time off from employment during their lives to care for children or other family members.

Among young women, 59 percent say that being a working parent makes it harder to advance in a job or career, compared with just 19 percent of young men. Across all age groups, 22 percent of women and 9 percent of men report having quit jobs for family reasons at some point during their working lives.

Fewer young women than young men aspire to become a boss or top manager. Some 34 percent say they’re not interested, compared with 24 percent of young men. And the vast majority of adults of all ages who reduced their work hours to care for family members – 94 percent – say they are glad they did it.

“This report shows that we are still very much in a ‘stalled revolution’ when it comes to gender equality in the workplace – and young women see it,” said Pamela Smock, a sociology professor at the University of Michigan. “When we see our male CEOs taking off a day to care for a sick child, then we will be working in a more gender-equal workplace – and a more gender-equal world.”

The Pew study was based on interviews with 2,002 adults by cellphone or landline from Oct. 7-27. The Pew poll has a margin of error of plus or minus 2.7 percentage points.