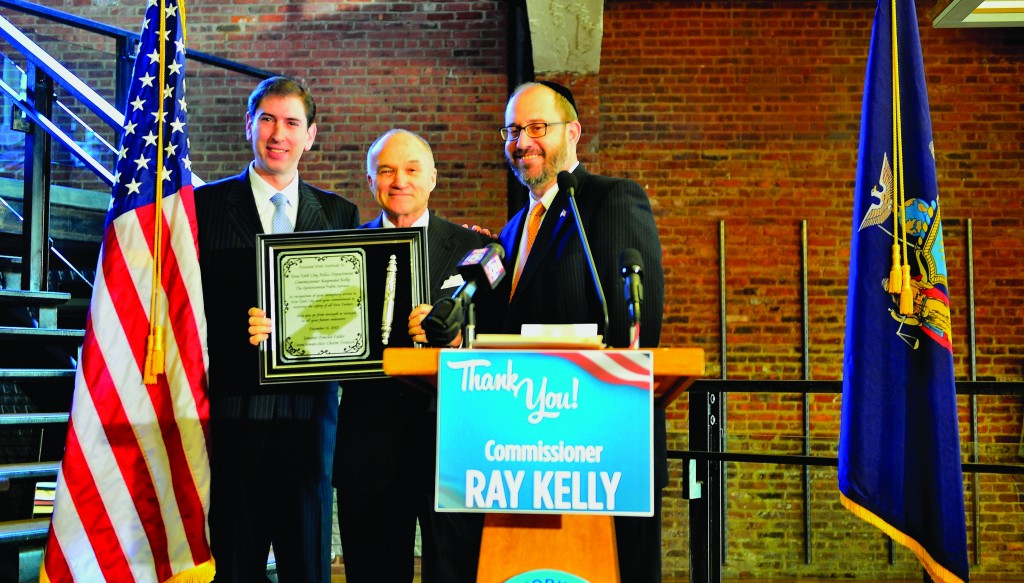 There were no tears at the farewell breakfast Wednesday for New York City’s outgoing police commissioner, but Raymond Kelly and the nearly 200 Jewish elected and community officials had a hard time saying good-bye.

Long after top aides tried hustling Kelly out, he clearly enjoyed the Flatbush event hosted by state Sen. Simcha Felder and Councilman-elect Chaim Deutsch, both Orthodox Jewish Democrats from Brooklyn. He stayed behind to shake hands, pose for pictures and kibbitz with guests.

Kelly, a 72-year-old retired Marine colonel, deflected the honor heaped on him as merely an extension of the good work of his officers.

“I accept this award on behalf of the 50,000 men and women of the department doing such a terrific job,” he said. “It’s great to see some recognition for the department.”

But that did not stop the outpouring of thankfulness by the speakers at the event, held at the Canal Jeans Building on Nostrand Ave.

“Today is all about gratitude,” said Felder, who as a former city councilman worked closely with Kelly, “about saying thank you to an individual that I consider to be the quintessential public servant, and the best police commissioner New York City has ever had.”

Deutsch, who had his own relationship with Kelly as the founder of the Flatbush Shomrim and as the community affairs liaison to Mike Nelson, the councilman whom he replaces in January, heaped praise on the commissioner.

“Over the course of the past 21 years, since I founded Flatbush Shomrim, I have seen the accomplishments of the New York City Police Department firsthand,” Deutsch said. “As I gather my transition team and prepare to represent the many diverse communities of my district in City Hall, I am proud to know that the quality of life in New York City is at an all-time high while crime is at an all-time low.”

“Thank you, Commissioner Kelly,” he said to applause.

Felder and Deutsch presented Kelly with a plaque containing an oversized silver mezuzah, the Jewish symbol for Heavenly protection.

“You have kept us and our families safe for the last 12 years,” Felder said in presenting the gift. “We thank you for your service, and present this mezuzah — a symbol of protection and safety — to you as a token of our appreciation.”

Felder drew laughs when he alluded to New York’s status for several years running as the safest big city.

“There are only three cities considered to be safer than New York — Plano, Texas; Lincoln, Nebraska; and Henderson, Nevada,” he said. “Anyone who wants to move there can leave now.”

“Kelly’s departure from the NYPD is going to be a great loss for all New Yorkers,” Felder added.

Kelly said that after the terror attacks of Sept. 11, 2001, people said New York City was “doomed.” He shared that 16 terrorist attacks against the city have been thwarted since 9/11, and warned that the city must remain ever vigilant against those who seek to harm us.

In a brief interview with Hamodia following the breakfast, Kelly, whom polls consistently show as the most popular city official, said that he did not see a return to public office, “in the near future.”

Reports have surfaced that he has accepted a position leading banking giant JPMorgan Chase’s cyber security protection, but he did not answer several question posed about his future plans.

“I want to first enjoy the free marketplace, I’d say,” he said with a chuckle. “Maybe make some more money.”

However, Kelly said that while he was officially “retiring” from public view, he intends to stay in the discussion by “commenting” or “doing the speech circuit.”

Asked if that meant he would be commenting on the city’s security in light of the new direction Mayor-elect Bill de Blasio intends to take the police department, Kelly was noncommittal.

“We’ll see what happens,” he said.

He has rarely complained of the toll the bashing he received during the recent Democratic primary took on him and his family, but Kelly hinted at it during the interview.

“Public service is a great calling. … I would urge any young person with any inclination to public service to try it. It’s getting more difficult, it’s harder every day, coming under scrutiny or just the public discourse that goes on,” Kelly said. “But it’s still very rewarding, you feel it inside that good things are happening.”

Asked about several polls that emerged during the recent primary indicating that he could win the mayoral race — an ambition Kelly knocked down a few times — he said Wednesday that he indeed did take the calls seriously.

“I thought about it, yes,” he said. “But I ultimately came to the conclusion that it wasn’t for me. It involves your family; it’s a world that’s become more complex. I’m not certain that I want to expose my family and myself to that sort of intensity.”

Kelly said that his most “intense” moments during his 12 years as police chief were the deterring of “a lot of [terror] plots” against the city, protecting the World Economic Forum in 2002 that brought dozens of world leaders to the city, and the Republican National Convention in 2004, when 800,000 protesters gathered to protest the Iraq War.

But he says that the hardest moments were finding out about the death of a police officer, particularly on duty.

“Obviously when police officers are killed, that is the worst possible situation,” he says. “To interact with their spouse, parents, children. It is a gut-wrenching experience.”

Turning to the recent spate of knockout attacks, the vast majority of which were perpetrated by black youths on Orthodox Jews, Kelly retracted partially from his earlier assertion that police were still “debating” if it was a real phenomenon or an urban myth.

“There is such a phenomenon,” he said. “The question is, how broad is it? And also, there are people who want to make it a major, major issue. Our concern is the more publicity it gets the more it will happen. So you just have to be careful. It’s not a one size fits all.”

Kelly said that police are tackling the senseless crimes by adding patrols and monitoring internet and social media chatter for teens boasting of their exploits. But the best way to check it, he says, is by having victims file police reports.

Kelly said that his relationship with the Jewish community, which began as precinct commander in the 1980s in Crown Heights, was “very strong.”

“The Jewish community has always been very supportive of the police department,” Kelly said. “We understand that there can be bias against members of the Jewish community; the Hate Crimes Task Force takes every allegation seriously.”