A newly minted budget deal to avert future government shutdowns gained important ground Wednesday among House Republicans who are more accustomed to brinkmanship than compromise, even though it would nudge federal deficits higher three years in a row.

There was grumbling from opposite ends of the political spectrum — conservatives complaining about spending levels,  and liberal Democrats unhappy there would be no extension of an expiring program of benefits for the long-term unemployed.

Yet other lawmakers, buffeted by criticism after last October’s partial government shutdown, found plenty to like in the agreement and suggested it could lead to future cooperation. The plan was announced Tuesday evening by Sen. Patty Murray (D-Wash.), and Rep. Paul Ryan (R-Wis.), and quickly endorsed by President Obama.

A House vote was expected as early as Thursday as lawmakers race to wrap up their work for the year.

“A lot of folks will probably vote for it even though they would rather not support this type of legislation, but we have to get the spending issue completed so that there is some consistency in the future,” said Rep. Jeff Miller (R-Fla.). 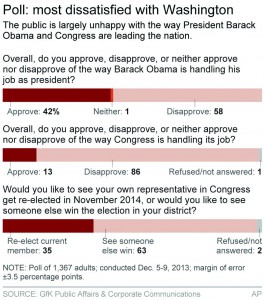 Boehner also took a swipe at outside groups that helped steer Republicans toward the politically damaging shutdown and opposed the current deal before it was sealed. “They’re using our members, and they’re using the American people for their own goals. This is ridiculous,” he said, evidently referring to the Club For Growth, Heritage Action and other organizations.

Modest in scope, the deal underscores how much ambitions have shriveled since the summer of 2011, when Obama and Boehner held private but unsuccessful talks on a “grand bargain” to reduce deficits by $4 trillion over a decade.

In the current climate, though, it means a return to something approaching a routine, where spending committees will be able to write and pass individual bills each year, removed from the threat of a shutdown.

As drafted, the bill would reverse $63 billion in across-the-board spending cuts scheduled to take effect in the current budget year and the next one, easing a crunch on programs as diverse as environmental protection and the Pentagon.

It would offset the higher spending with $85 billion in savings over a decade from higher fees and relatively modest curtailments on government benefit programs.

Nearly a third of the total savings would come nearly a decade from now, in 2022 and 2023, partly from extending a current 2 percent cut in payments to Medicare providers. Also, future federal workers would pay more toward their own retirement, fees would rise on air travelers and corporations would pay more to the government agency that guarantees their pension programs.

This article appeared in print on page 2 of the December 12th, 2013 edition of Hamodia.