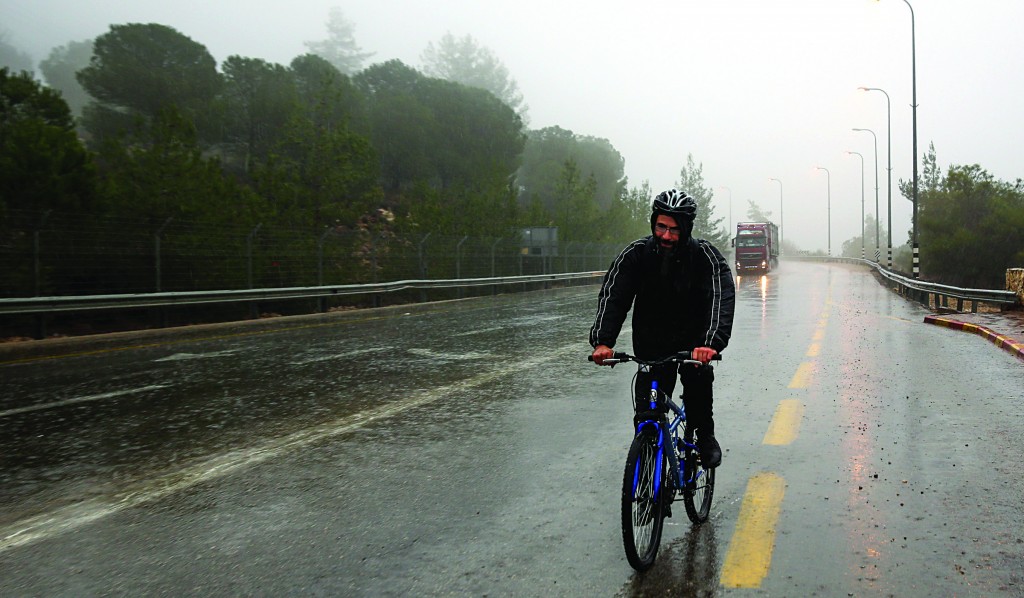 Israelis had something to talk about besides Iran and the Palestinians on Wednesday as rain came down in torrents driven by strong winds amid falling temperatures.

As of  Wednesday afternoon, the Water Authority reported that Lake Kinneret had risen an additional centimeter, bringing the basin up to 633 feet below sea level.

Israel’s Chief Rabbis issued a call on Wednesday for a special prayer of thanks for the rains to express “praise and thanksgiving to G-d for opening the gates of heaven and receiving our prayers…” Fears of a drought this year prompted calls for public prayer gatherings earlier this month, Arutz Sheva reported.

Strong westerly winds buffeted the country, with speeds recorded of up to 50 miles per hour, according to the Israel Meteorological Services (IMS).

The weather created treacherous road conditions, massive traffic jams on major arteries and forced school closures. According to Army Radio, traffic was backed up bumper-to- bumper on sizable sections of Route 6, Route 5, and the Tel Aviv-Yerushalayim highway. In Bnei Brak the storm crippled the traffic light system, leading to chaotic driving conditions. The airports in Haifa and Rosh Pina were shut down.

Flooding was reported in Tel Aviv at the boardwalk and Kikar Hamedina. In Ramat Gan, nine streets were flooded and several traffic lights stopped operating.

The high winds on Wednesday evening tore an awning from a balcony which fell to the street and hit a passerby on the head in Tel Aviv. Magen David Adom treated the 25-year-old and transferred him to Ichilov Hospital, where he was treated for light injuries.

Government and rescue services were put on alert. The Transportation Ministry opened a special situation room at the Israel Meteorological Services office in Beit Dagan to monitor possible flooding of roads and railways and to provide updates on any disruptions to air traffic at Ben Gurion Airport.

Most schools were open on Wednesday, but the Education Ministry put the public on standby for closures on Thursday morning.

Snowfall was expected in the north on Thursday, and in mountainous areas, including Yerushalayim, where the city was readying its snowclearing and other emergency equipment.

“It seems now that it is quite certain that it will snow,” Dr. Amos Porat, director of the Climate Department at Israel Meteorological Services (IMS), told The Jerusalem Post on Wednesday afternoon.