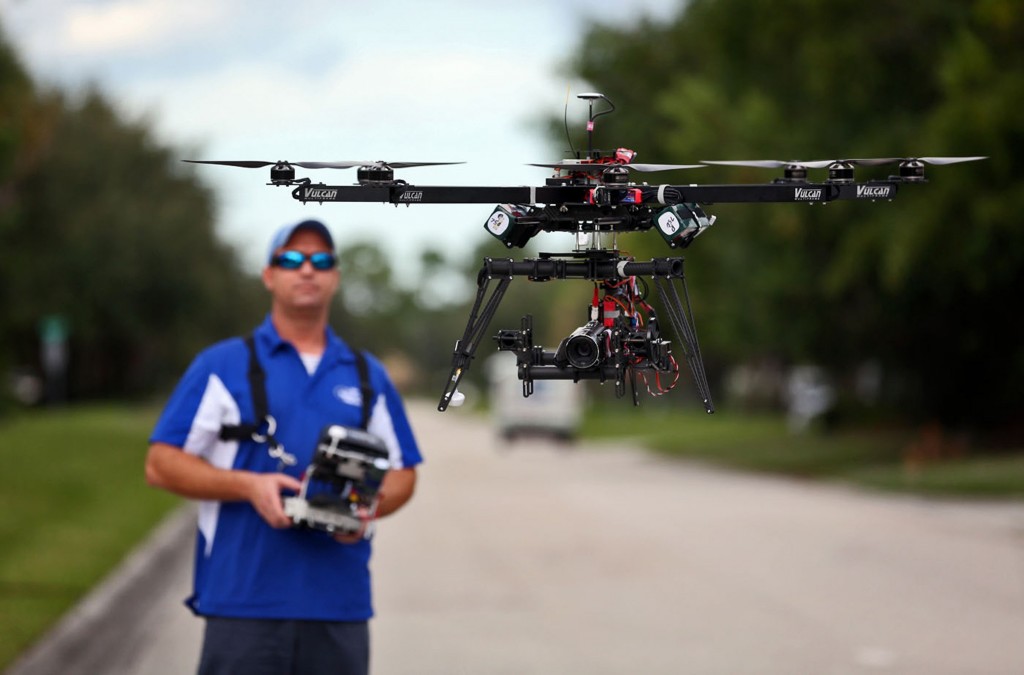 The camera swoops over the green expanse of the Everglades hundreds of feet below, like many helicopter shots. But suddenly, it dips and flies through a narrow, shaded canal where kayakers are paddling, and a viewer has to wonder, “How on earth did they fly a chopper in such a tight space?”

The answer: It isn’t a helicopter. It’s a drone.

Welcome to the world of small, radio-controlled, unmanned aircraft for commercial use. When Amazon.com CEO Jeff Bezos said on CBS this month that his company plans to use drones to deliver packages in the next several years, he created a buzz. But such aircraft are already used for limited commercial purposes.

“And it costs a fraction of what a helicopter will cost for a full day,” Colodny said.

Brett Strand, sales manager for ReadyHeli.com of Jupiter, Fla., a distributor of drones, said he has sold 40 to 50 units in the past six months, mostly to people who fly them as a hobby. But his business plan includes increased sales for commercial use, and not just for advertising, but for uses such as “people who need to look at roofs, inspect power lines, farmers inspecting their fields, even fishing guides looking for where the fish are.”

Strand said they all will have use for the view that drones afford.

Military drones have been in the news frequently in recent years. The U.S. has used them to target and kill enemies in such places as Afghanistan, Pakistan and Yemen. Their use has been controversial because, in some instances, innocent civilians were killed by the missiles fired by the drones.

Strand, 39, does not call his units drones. The term used by the Federal Aviation Administration for such civilian craft is unmanned aircraft systems – or UAS.

Military drones look like small airplanes and are controlled from hundreds or thousands of miles away. The products sold by Strand look more like small helicopters – anywhere from a few inches to 5 feet in diameter – and they have multiple rotor blades. The other important difference is that the civilian craft can be flown legally only within the line of sight of the pilot manning the remote control on the ground.

“And you can only fly them to a maximum height of 400 feet,” Strand said, detailing another difference from military drones, although he said some civilian drones are capable of reaching thousands of feet in altitude.

That activity puts him technically at odds with the FAA, which has banned the use of drones for commercial purposes, at least so far. The FAA has said it will issue guidelines in 2015.

“Ultimately, UAS must be integrated into the NAS (National Airspace System) without reducing existing capacity, decreasing safety, negatively impacting current operators, or increasing the risk to airspace users or persons and property on the ground,” FAA Administrator Michael Huerta said in November.

Another concern cited by the FAA is privacy that might be violated by overhead cameras. Huerta said new regulations must be written, specific drones must be certified as safe and their operators certified too. In April, Florida Gov. Rick Scott signed into law a bill prohibiting law enforcement agencies from using drones for surveillance, unless a warrant is issued, or in response to the threat of a terrorist attack.

Colodny said while the government is studying possible regulations for commercial use, he is operating by following the regulations that exist for hobbyists – flying drones only within his line of sight, not flying them near airports,  and not flying them over crowds. He says he works for production companies that always pull permits when they are required by municipalities, and has had no legal problems.

But at least one drone pilot has attracted the unfriendly attention of the FAA. Raphael Pirker, founder of Team BlackSheep, based in Hong Kong, was fined $10,000 this year, after conducting a shoot for the University of Virginia. The FAA said Pirker flew a 4.5 pound drone “in a careless and reckless manner,” endangering the public by flying too low, too close to civilians, and even through a tunnel in which vehicles were traveling. Pirker is fighting the fine.

Pirker’s lawyers claim that because the FAA never allowed members of the public to comment on its proposed rule, before issuing a ban on commercial use of drones – a procedure that must be carried out in the Federal Register – the ban is not valid.

“It’s going to take a while to figure this out,” Strand said. “This could be chaos in the skies. And the battery technology is still sketchy. You don’t want these things crashing down on people.”

He also sees a potential scary scenario if a device gets into the wrong hands.

“Bad guys could strap dynamite or C-4 explosive to one, fly it near a building and set it off,” Strand said. “They could do that for $500.”

Already some people are using drones for questionable activity. Four people were arrested recently in Calhoun County, Ga., for using a drone to drop contraband into the yard of a local prison.

As for Bezos’ plans for using programmed, autonomous drones to deliver packages of up to five pounds, the two local men agree that scenario is several years away. GPS technology must be refined “so that you don’t put a package down the neighbor’s chimney,” Strand said.

They also say that batteries need to be developed, for commercial use, that are light enough and powerful enough to allow drones to travel 10 miles. Strand says now his units can go only a mile or two. The U.S. military and NASA have such advanced batteries. Private enterprise is still working on its own versions, but they will come, Strand said.

How Drones Could Be Used: