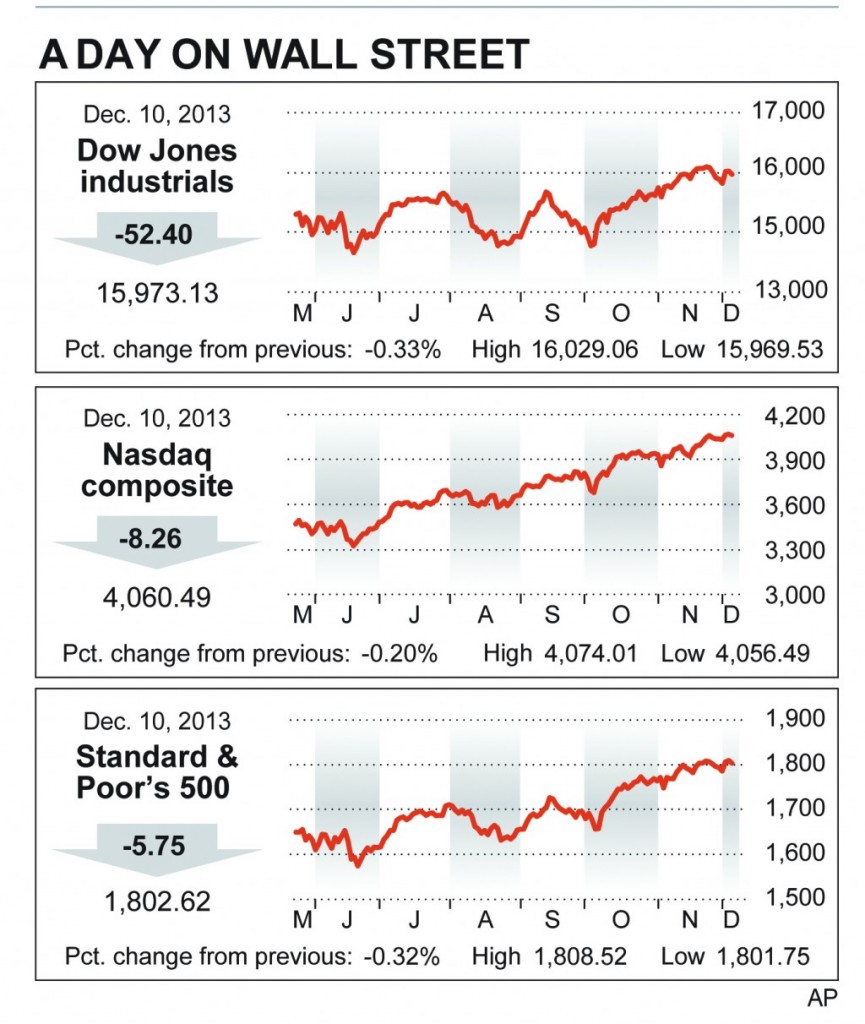 Stocks fell modestly Tuesday as investors took a breather from a market that notched yet another record high the day before.

The market has hit several all-time highs in recent months, but with the holiday season and end of the year approaching many investors expect the market to be calm as 2013 winds down.

“It’s quiet, and the only trading that will go on the rest of this year will be people selling for tax reasons and window dressing,” said Jack Ablin, chief investment officer for BMO Private Bank, which manages $66 billion of assets.

It’s a common practice for portfolio managers, in the last couple weeks of the year, to close out positions, sell off poor-performing stocks and try to make portfolios look as good as they possibly can when they mail their year-end statements to investors. On Wall Street, the practice is sometimes called “window dressing.”

Banking stocks were mostly higher after investors got some clarity on new regulations.

Federal regulators voted to approve the Volcker Rule, which bars banks from betting on the market with their own money. The Federal Deposit Insurance Corporation, the Securities and Exchange Commission and other federal agencies approved the rule, which will go into effect by July 2015 for the nation’s largest banks.

The Volcker rule is part of the Dodd-Frank financial reform law passed in 2010 in the aftermath of the financial crisis.

One of the few remaining events on the economic calendar this year is the Federal Reserve’s two-day policy meeting next week. The Fed is widely expected to scale back its stimulus program in the coming months, but few investors expect it will do it next week so close to the end of the year.

Economists expect the Fed to start pulling back, or “tapering,” its economic stimulus in the first three months of 2014.

“No matter how you look at it, tapering is on its way,” said Quincy Krosby, market strategist with Prudential Financial.

Twitter jumped $2.85, or 6 percent, to $51.99 after the company announced a new service called “tailored audiences,” a platform will let advertisers focus on a specific group of people and target ads to them.

In other corporate news, Lululemon Athletica’s founder said he would relinquish the company’s chairmanship after his comments about the body type of potential customers caused a backlash. The yoga apparel retailer fell $1.22, or 2 percent, to $69.12.

General Motors named Mary Barra as its next CEO. She will replace Dan Akerson and will be the first woman to run a major U.S. car company. GM slipped 50 cents, or 1.2 percent, to $40.40. The U.S. government also said Tuesday that it had sold the last of its stake in the automaker, which it acquired following GM’s 2009 bankruptcy and restructuring.